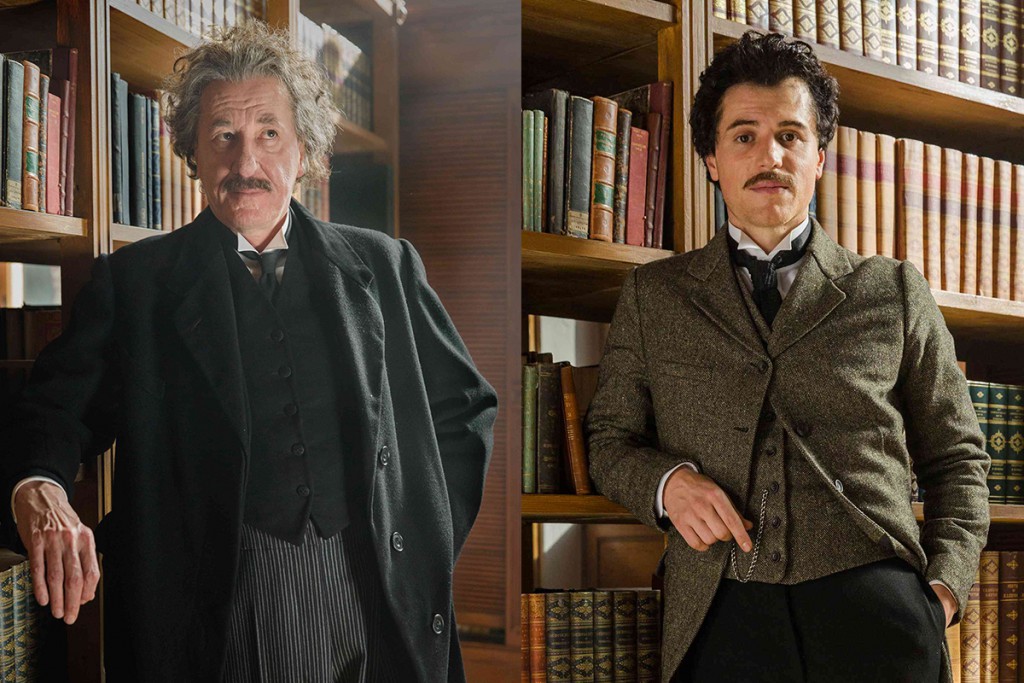 Old Einstein and young Einstein both get their close-ups in Genius. (Credit: National Geographic/Dusan Martincek)

If you are going to create a television show called Genius, you had better grapple with the nature of genius. If you are going to do that kind of grappling, you might as well focus on the very first face that comes to mind when people say “genius.” And if you are going to do a show about Albert Einstein–which is exactly where the creators of the new series Genius ended up–you’d better have some fresh things to say about the most famous figure in the history of science.

I’m familiar with the challenges. In my book God in the Equation, I attempted a novel interpretation of Einstein’s views on cosmology and theology–with mixed results, I’ll confess. I’ve also written about Einstein’s cultural impact in Discover magazine, and edited articles exploring everything from his family tree to his commercial impact. So I was relieved and intrigued to see that Genius (premiering tonight on National Geographic) does indeed add some new elements to the mix.

Not to give too much away, but…the first ten minutes of the first episode contains distinctly more sex and death than I was expecting. Even after reading Einstein’s much-publicized love letters, it is still startling to see the famous physicist (played by Geoffrey Rush) displaying messy, earthy human desires. Genius also digs deep into Albert’s early years, showing him as a brash, impulsive, confrontational teen (Johnny Flynn handles Young Einstein duties). I initially assumed there was a lot of fictionalizing going on there, but many of the anchoring details come straight from Walter Isaacson’s well-regarded biography, Einstein: His Life and Universe, which provided the spark for the whole series.

At times, Genius succumbs to a touch of prestige-production syndrome, turning self-conscious in spelling out important concepts to the viewer; at others, it seems a little too pleased with its own outrageousness. Both are the failings of too much ambition, at least. And mostly, the series navigates a smart course between celebrating the otherworldly singularity of Einstein’s mental powers and the accessible universality of humanity. It is a highly worthy undertaking at a time when the world could use more inspiration both to greatness and to goodness.

For more insight into the process that gave us this expansive new take on the Einstein story, I spoke with executive producer Brian Grazer as well as writer Noah Pink. Their distinctly different perspectives (in age, interests, and attitude) reflect Genius‘s diverse ambitions and, ultimately, its realistically conflicted definition of what exactly makes a genius a genius. Edited versions of my interviews follow, starting with Grazer.

Why Einstein? He’s an obvious choice for a show about genius, but maybe too obvious?

Brian Grazer: Walter Isaacson’s book contains a lot of insights into the nuances to Einstein’s life and how he interfaced with global culture. He also faced the life-or-death struggle of being a Jew during Nazi Germany, having to leave Europe for America…after reading the book, we felt like it had enough propulsion to be almost a thriller. When you are a storyteller you are looking for that vertical, straight-line narrative. We felt like we had that, even though we’re including lots of different things.

Do you consider Einstein a template for the concept of “genius”?

BG: He’s inarguably a genius, and it’s hard to find inarguable geniuses! We’ve been working on what could be season 2 of Genius, and there are a lot of people you might commonly think could be a genius but don’t qualify in the same way as Einstein. We haven’t even figured out who our next genius will be. We did feel like we had to open it up beyond science and medicine to business, athletics, the arts… Science and medicine are not the only metrics that define a genius.

You certainly mess with the stereotype of genius, throwing sex and death into first episode…

In a fictionalized series like this, how do you balance literal truths with impressionistic ones?

BG: Ron [Howard] and I have made many life stories into movies, whether it’s Apollo 13 or A Beautiful Mind or James Brown. You have to create composite characters sometimes, and you do sometimes have to go for the spirit of something within the world of the truth. Really, not every little thing can conform to what’s actually happened, because in many situations nobody really knows what actually happened–particularly when you examine thought or emotionality. Einstein is so iconic that we put much more weight on humanizing him than on idolizing him. It’s an origin story with pain, sacrifice, triumph, and tragedy.

You also dive into the political Einstein’s story. What message do you want viewers to take away from it?

BG: The politics of immigration has been so pointed recently, and Einstein is a definitive character who was an immigrant; he came to America and was a treasure of the planet, certainly of our country. We want to emphasize as much freedom as possible. 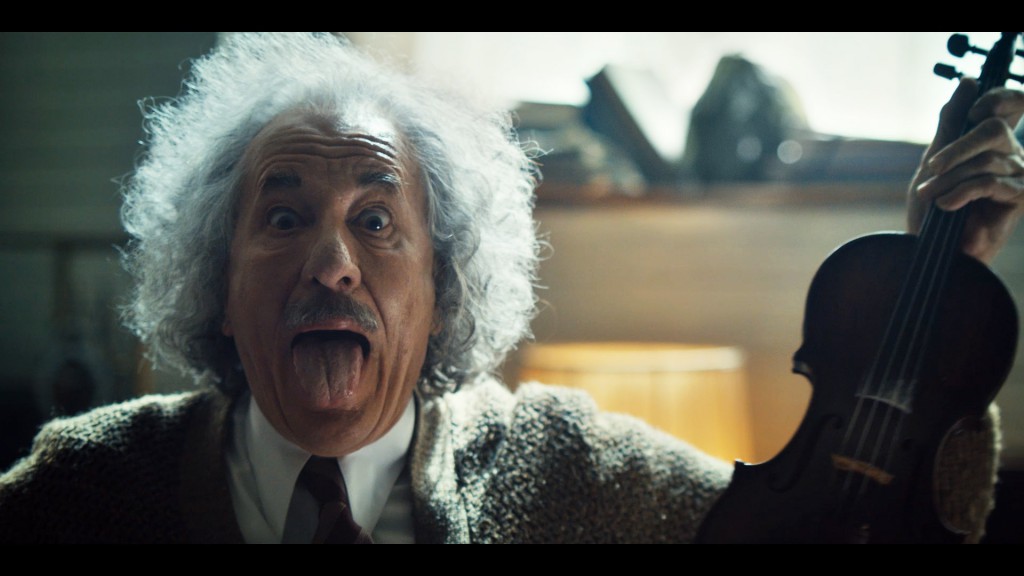 Oh yes, you get this Einstein, too. (Credit: National Geographic/Dusan Martincek)

There are many sides to Einstein. How did you decide which Einstein you want to show in Genius?

Noah Pink: I wanted to show him as a human being with all of the flaws and juxtapositions. He was a genius and a humanist, but his fathering was questionable; he tried to exert sympathy for all of humanity but he sometimes couldn’t have sympathy for his own children. He was a quintessential scientist but also a hopeless romantic; a moralist in politics but in his love life, a polygamist. He accomplished so much in life, but if I could look at him as a regular character, I could find an angle to connect with and the audience could, too.

What about sexy Einstein? Why go there so quickly?

NP: We all have an idea of who Einstein is. For most of us it’s the poster we saw in 6th grade math class of him sticking his tongue out, saying imagination is more important than knowledge. We’re not trying to tell a salacious version of his story; we’re trying to give a fair representation of who Einstein was as a scientist, a father, a lover, a friend. All of that was important.

How did you try to make the portrait not just fair, but true to life?

NP: I had to interpret events and actions, but it wasn’t just me making up stuff. We have Einstein’s letters, we have his speeches. I tried to pepper in as much of Einstein’s actual voice as I could, especially in the pilot. I researched how he spoke, his mannerisms, his outlook on life. I began creating scenes that incorporate some of his famous sayings or writings, then putting it in the context of the dramatic settings. What’s on screen is the culmination of several things—my growing up Jewish, with Jewish humor, combined with knowing what Einstein’s point of view would have been. If you ever see any of his transcripts from the interviews he gave when he came to America for the first time—the man was so quippy, so fast on his feet it’s incredible. It’s like he had a joke ready for every question he’d be asked, and his jokes were both thoughtful and very funny.

The title of the series implies an answer to the question, “What is genius?” Do you have one?

NP: It’s a worthy question! With Einstein it was curiosity. Here’s a guy, no matter what age he was, who never stopped asking questions. If you never stop asking questions you’ll always get a path to something bigger. He proved that, from the moment he asked his dad what a magnet was to his dying days when he was in bed still scribbling equations, still trying to figure out unified theory. But he didn’t pluck these theories from nowhere. He had magnificent leaps in thought about gravity and time, but he wasn’t the only person thinking about these things. He was reading other people’s papers. He needed his friends to bounce ideas off of. He needed other scientists to help him build his theories. Genius doesn’t happen in a vacuum.

You show that he was also a rebel by nature. Clearly that’s an important part, too?

NP: Yes, Einstein’s rebellious attitude was paramount to his genius. He refused to cow-tow to anybody—parents, school teachers, then professors. For the first 26 years of his life, it worked against him. He didn’t finish high school in Germany, he failed to get into Zurich Polytechnic…in many ways, he was a young, egotistical schmuck. The difference is that Einstein also had the knowledge of most of what was going on in contemporary physics by the age of 18. He had a combination of ego, brashness, and sincere hatred of authority, combined with years and years of studying and an innate ability to understand the physical world in a way that most of us would never dream us.

The questions Einstein asked, he could ask only because he didn’t trust authority. He didn’t believe that anything coming out of his professors’ mouths was true. That led him on a path to question everything, and if you do that you find the holes. James Clerk Maxwell found that light moves at just one speed, but that was contrary to what Newton said: Light can’t move at one speed if space and time are absolute. So which one was right? If you had any sense, you’d probably say Newton’s right because he was the pillar of physics. But because Einstein was who he was, he felt free to say no, Newton is wrong.

One of the more surprising details in Genius is that Einstein was a talented engineer, not just a thinker of far-off theories.

NP: It was a classic story of a dad wanting his son to follow in his footsteps [Albert’s father was an engineer]. Einstein learned those skills and was very adept at it. He took that knowledge with him to the patent office; he often found himself making the patents better! A big issue at the time in Switzerland was synchronicity of time, how to synchronize all the clocks in the towns so that time would be absolute. Dealing with patents around the clock problem, that got Einstein thinking: If I’m standing outside a clock tower and looking at a clock strike twelve, will it strike 12 at the exact same time as a clock on a train that’s flying by the clock tower? The nature of time relates to reference frames, which led to relativity. Sometimes when we do things we don’t want to be doing, we learn things that we never thought we would!

What do you see as the personal lesson of Einstein’s story? Do we all have an obligation to aspire to genius, or is it reserved for the special few?

NP: The key takeaway I’d want people to have is that we should never stop questioning, and never take anything for granted. Just because a leader says something, don’t think it’s true. Here is a man who stood up to everybody, because he just could not help himself. Einstein wanted everybody to live up to their potential–politicians, leaders, scientists, and friends. His genius was a combination of preparation and eternal curiosity. If we can embrace those, we can all live up to our potential.