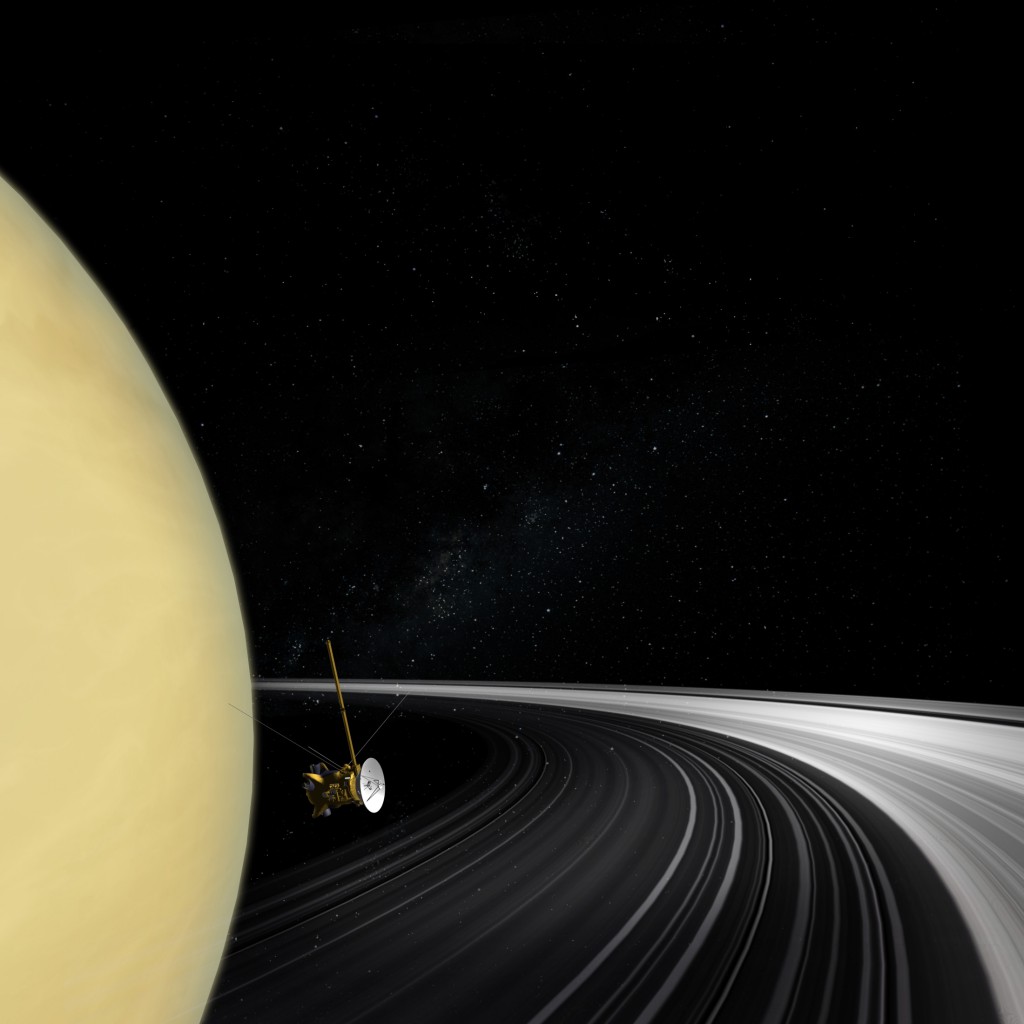 As shown in this illustration, during its Grand Finale mission stage Cassini will fly through the 1200-mile gap between Saturn’s cloud tops and rings 22 times. (Illustration credit: NASA Jet Propulsion Laboratory)

Every scientist and engineer who has been part of the Cassini mission team will probably be a bit anxious during tomorrow’s early morning hours. The craft will fly through a 1200-mile-wide gap between Saturn’s cloud tops and its inner ring, giving humankind new views of the planet and its rings. Tomorrow Cassini officially enters its Grand Finale stage, and for the next nearly five months the spacecraft will study Saturn’s atmosphere and the rings from closer than any craft has ever been to the Ringed World. And then on September 15, Cassini will crash into Saturn, destroyed by the atmosphere belonging to the planet it has revealed.

Since July 1, 2004, the Cassini spacecraft has been a fixture of the Saturn system. It has seen details of features in the rings and the atmosphere and helped planetary scientists understand what causes each of those features. It has studied dozens of moons orbiting the planet, and revealed the icy moon Enceladus to be a top spot to look for life in the solar system. It sent a probe down to the surface of Titan, Saturn’s largest moon, and Cassini discoveries have shown this moon to be extraordinarily Earthlike, with river channels and seas and sand dunes.

And over its tenure at Saturn, the robotic explorer itself has evolved. Scientists have reprogrammed instruments and uncovered more ways to analyze the data from those instruments. The craft has had several mission extensions following its initial 4-year primarily mission. And now, with Cassini nearly out of fuel, it begins its final mission.

On April 22, when the craft flew by Titan, that moon’s force of gravity slightly yanked on Cassini, altering its orbit and sending it on a one-way trip into the Ringed Planet. (And actually, every change in course the spacecraft has experienced during its 13 years at Saturn has been the result of Titan’s gravity — and engineering ingenuity.)

The mission team’s biggest concern is whether researchers understand the rings well enough. From Cassini photographs and data, in addition to studies of other ring systems in the solar system, researchers expect the gap might have some dust, with particles similar in size to smoke. But if they’re wrong, and that area isn’t as diffuse as expected, it would mark a premature end to the Grand Finale mission. Cassini will be barreling faster than 70,000 mph as it passes through that gap, and material the size of a BB would be disastrous. Researchers have calculated the probability of something going awry and the craft being knocked out by debris, and it’s low, but Cassini isn’t just passing through that gap once. It will dive through the gap 22 times, and that probability adds up. They have a 98.8% chance of being successful, said Cassini Program Manager Earl Maize during a press conference.

If all goes as planned, and nothing takes out the spacecraft during the first 17 orbits, “on the last five orbits, we’re going to dip our toe in the atmosphere,” said Project Scientist Linda Spilker during that same press conference. Cassini will use its science instruments to measure the composition in the atmosphere, for the first time tasting Saturn’s cloud tops. And then after the 22nd dive through the gap, Cassini will skim so close to the planet’s atmosphere that the pressures will tear apart the craft.

“When that final plunge occurs on September 15, it will be like saying goodbye to a friend, a good friend,” Spilker told me last month. And something about that idea, of losing a close friend, struck a chord for me. By coincidence, the Cassini exploration of Saturn has aligned nearly perfectly with my own career in science writing. I started as an assistant editor at Astronomy magazine, Discover magazine’s sister publication, January 5, 2005. During my second week as a science writer, our staff sat together in a conference room to watch the NASA TV coverage of Cassini’s Huygens probe landing on Titan — the first time a human made spacecraft landed on a moon other than Earth’s. In some weird way, I feel that I have walked hand-in-hand with Cassini and its discoveries over the past 13 years.

I’m sad to see that relationship end later this year, but I’m also appreciative that I’ve been able to cover these extraordinary discoveries and this successful space mission.