A slice of the 195-million-year-old fossilized rib of Lufengosaurus reveals vascular canals, many of which contain hematite, probably derived from the dinosaur’s blood when it was alive. Credit: Robert Reisz.

We know the chances of finding dinosaur DNA are virtually nil. Despite recent advances, the oldest genetic material of any animal that researchers have successfully extracted and sequenced is about 700,000 years old (Note: still impressive. Most impressive). DNA degrades and gets contaminated by bacteria and other gunk; it’s unlikely researchers will push back that ancient DNA landmark much further.

But what if I told you they’ve found something potentially even better than DNA to give us insights into the Age of Dinosaurs? 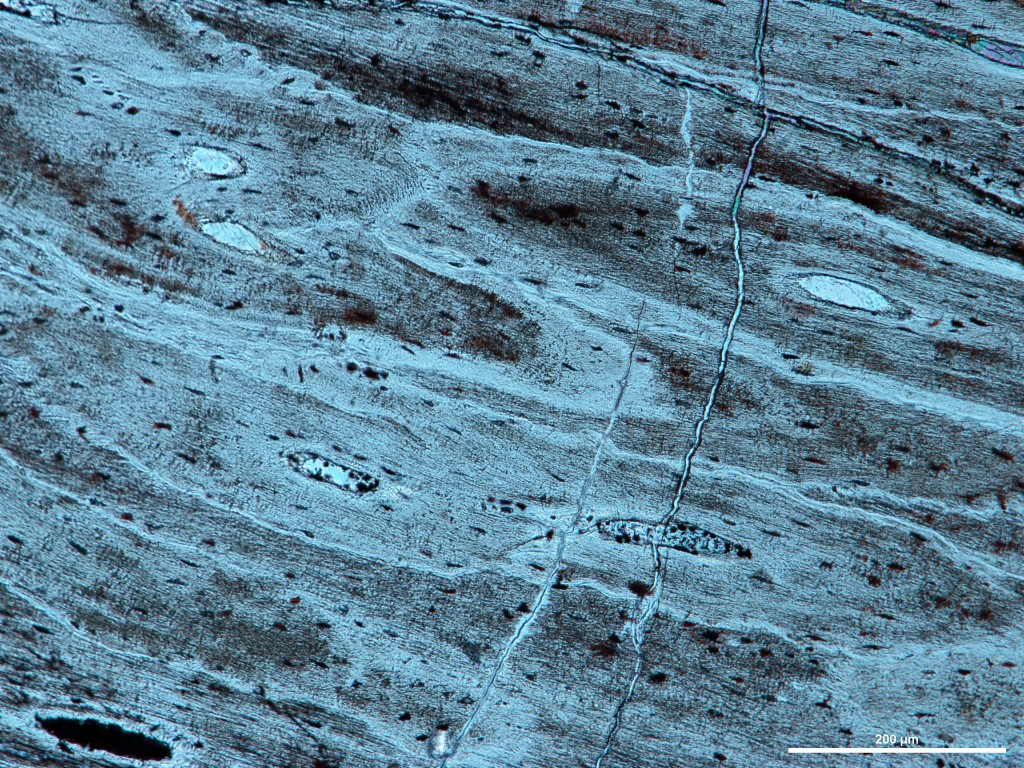 A close-up of the Lufengosaurus rib fossil slice shows vascular canals that in life contained blood vessels. Some of the canals are now filled with hematite, probably from the dinosaur’s blood 195 million years ago. Credit: Robert Reisz.

Published today in Nature Communications, researchers managed to find evidence of preserved protein in the fossilized rib of a 195-million-year-old dinosaur called Lufengosaurus.

Protein such as collagen has been found in dinosaur bones before, but what’s exciting about this find is both the technique and the age: This fossil is more than 100 million years older than previous protein-preserving finds (including one published just last week).

Despite all the dinosaur bones paleontologists are adding to the fossil record annually, soft tissue specimens are few and far between. They require very particular conditions to have a chance of being fossilized, such as type of sediment and how quickly it covers the carcass.

Even then, soft tissues on their way to being preserved for posterity can get derailed by bacterial contamination and other problems. Fossilized soft tissue specimens are also more prone to damage or even destruction by the methods traditionally employed to study them. 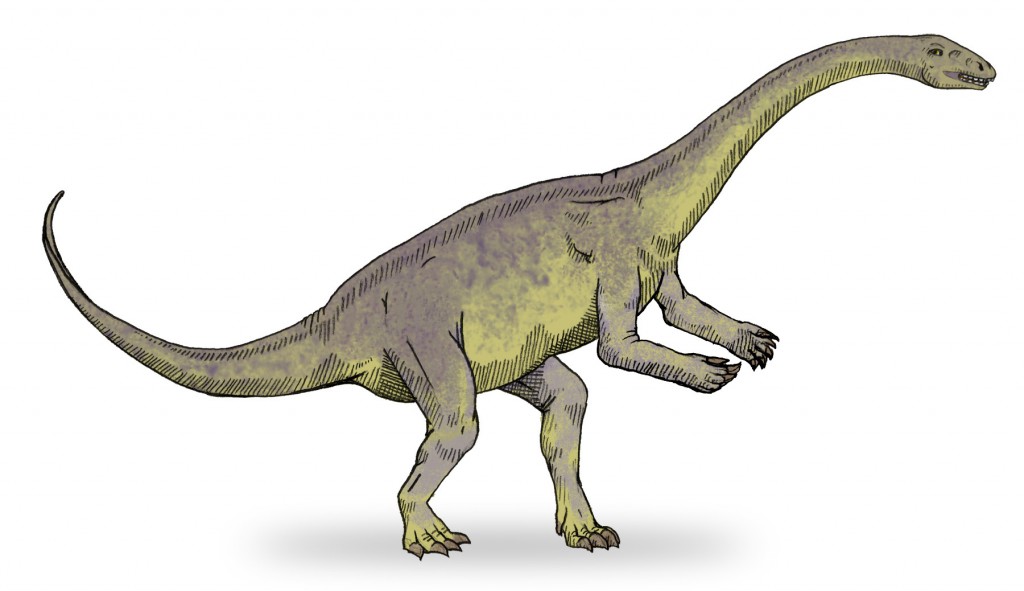 An artist’s rendering of Lufengosaurus, an Early Jurassic dinosaur first unearthed in southwestern China in the 1930s and now seen in a new light, so to speak, thanks to infrared chemical signatures found in a fossilized rib. Credit: debivort/Wikimedia Commons.

The team working on a rib of Lufengosaurus employed in situ synchrotron radiation-based Fourier transform is anyone still reading this infrared microspectroscopy (SR-FTIR) which, in addition to taking a really long time to type, is a non-destructive way to look inside a fossil and identify molecular structures based on their infrared absorption band signatures.

Whew. Okay, now that I’ve used up all my big words for the day, possibly the week, basically they peeped the fossil’s innards with crazy-fine resolution and a filter that allowed them to identify particular organic remains. In this case, collagen, which is crucial for skin and connective tissue.

Using a second method, the researchers also identified hematite, which they believe was derived from the animal’s blood.

The presence of the hematite is important because the team believes it may have allowed the collagen to be preserved. Once the blood broke down and hematite formed, it may have effectively sealed off vascular canals — channels in the bones which, in life, include blood vessels — and protected the collagen within from the outside world.

And no, researchers can’t clone a dinosaur from collagen, so please stop emailing me and asking about that, but collagen can tell us a great deal about the dinosaur and its evolutionary relationship to other animals. Today’s find advances paleontology on a molecular level, which is in itself pretty exciting. 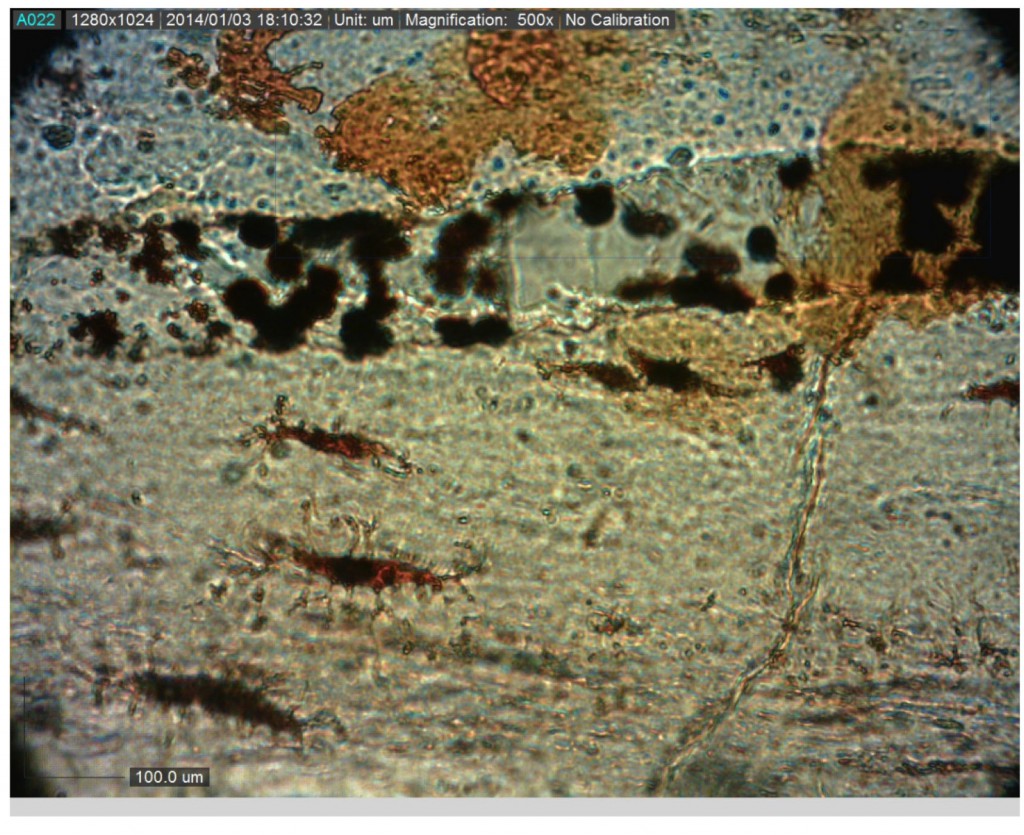 A section of the Lufengosaurus rib seen in a lengthwise slice reveals dark hematite particles — derived from the dinosaur’s blood — along a vascular canal. Other dark spots beyond the canal walls are lacunae, home to adult bone cells in life and now hosting more hematite particles. Credit: Robert Reisz.