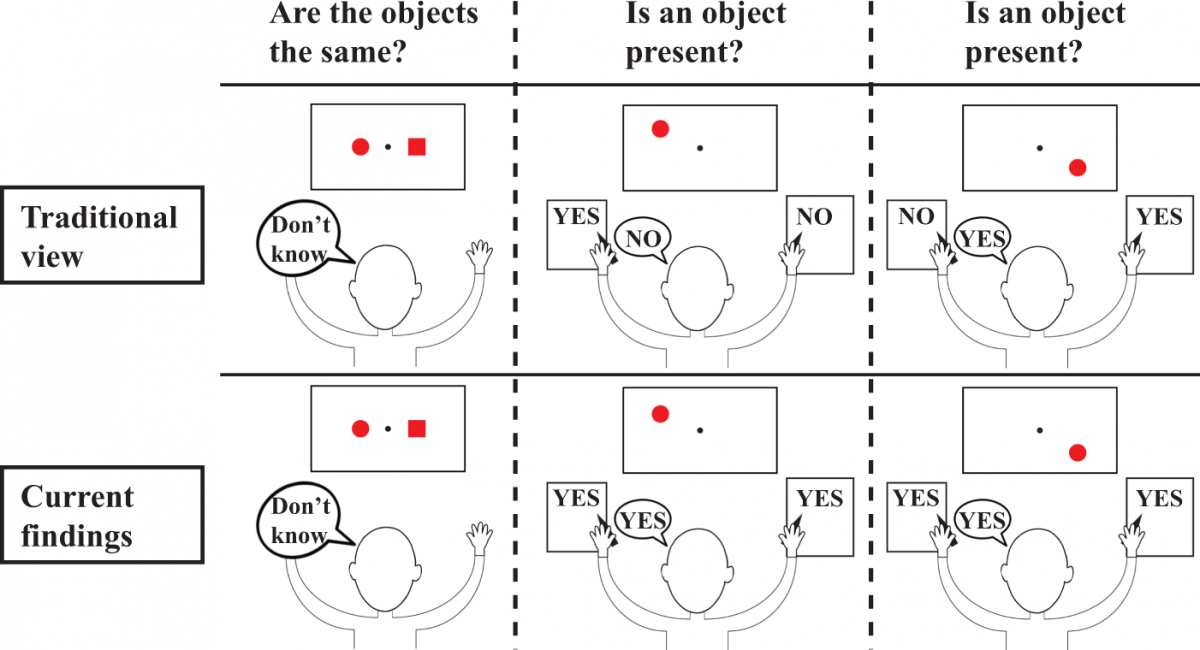 According to the famous work of Roger Sperry and Michael Gazzaniga, “split brain” patients seem to experience a split in consciousness: the left and the right side of their brain can independently become aware of, and respond, to stimuli. Split brain patients are those who underwent surgery to sever the corpus callosum, the nerve tract connecting the two hemispheres of the brain.

However, according to Dutch researchers Yair Pinto and colleagues in the new paper, the traditional view is mistaken: there is in fact no evidence of a split consciousness in these patients.

Pinto et al. carried out a series of studies on two split brain patients, “DDC” and “DDV”. Here’s how Pinto et al. summarize their results and how they differ from the conventional view:

However, Pinto et al. found that their patients were able to report the presence of stimuli on either the left or right visual field using either hand, as well as verbally. In other words, the split brain patients performed perfectly normally on this task. 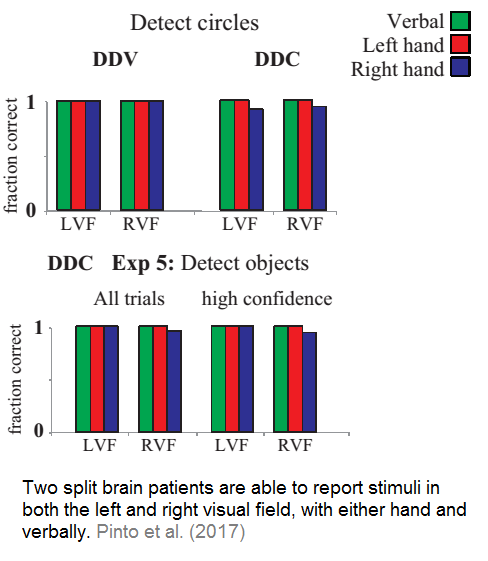 The authors say that this “surprising finding” suggests that “severing the cortical connections between the two hemispheres does not seem to lead to two independent conscious agents within one brain”. Similarly, when asked about their subjective experiences (although perhaps these should be taken with a pinch of salt),

Yet the patients in this study did have some deficits. Patient DDC was unable to say whether two stimuli presented on opposite sides of the visual field were the same or different. This suggests that the transfer of information between his brain hemispheres was indeed impaired – raising the question of why this did not affect his awareness.

Even without massive communication between the cerebral hemispheres, and thus increased modularity, unity in consciousness and responding is largely preserved. This preserved unity of consciousness may be especially challenging for the two currently most dominant theories of consciousness, the Global Workspace theory and the Integration Information Theory.

Indeed, but I’d go further: these results seem tricky to reconcile with any obvious model, not just of consciousness, but of brain function in general. How can the left hemisphere of the brain respond to stimuli presented in the wrong (left) visual field? It doesn’t seem possible within the accepted model of the brain’s wiring, unless we assume that there are intact interhemispheric connections.

So are we forced to hypothesize some kind of spooky “non-local” consciousness field which can somehow bridge the gap between the left and right hemispheres…? Perhaps we don’t have to go that far. Pinto et al. note that both of their patients had the split brain surgery decades ago and that in theory it is possible that “patients somehow develop mechanisms or even structural connections to re-integrate information across the hemispheres” over time.