Last month was the fourth warmest May on record, two reports out today agree 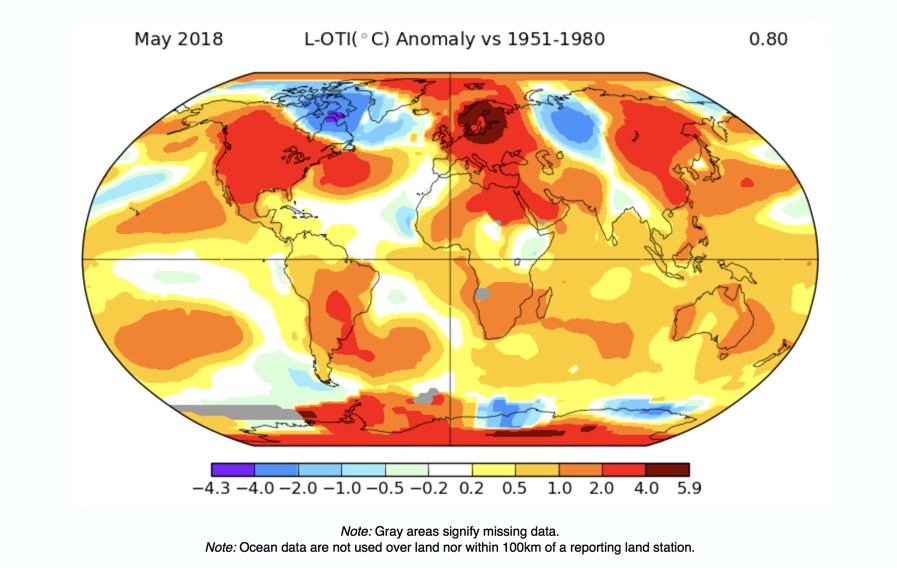 Hereâ€™s how surface temperatures around the globe in May varied from the long-term average for the month. Last month was the fourth warmest May globally on record. (Source: NASA/GISS)

In their monthly climate reports released today, both NASA and NOAA agree that last month was fourth warmest among all Mays dating back to 1800.

This means that the period 2014 through 2018 has brought the five warmest Mays in 138 years of record-keeping, according to NOAAâ€™s report. The warmest was May 2016.

â€œMay 2018 also marks the 42nd consecutive May and the 401st consecutive month with temperatures, at least nominally, above the 20th century average,â€� according to NOAA. 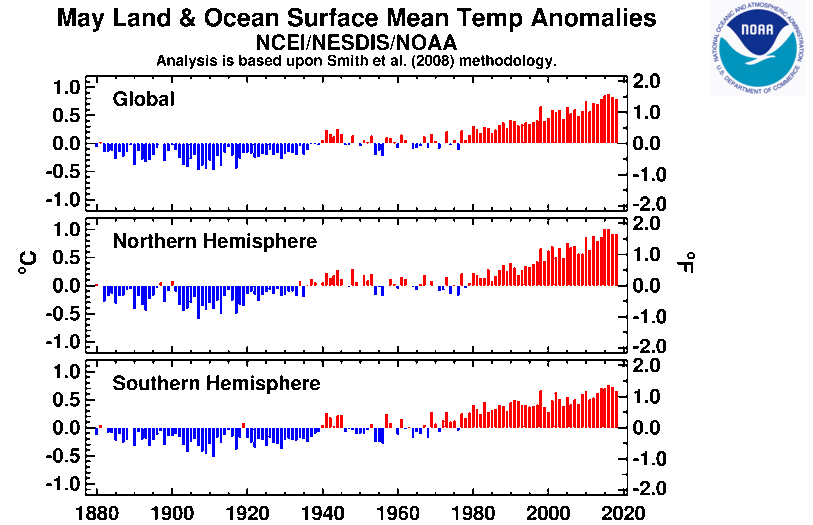 The trends in how temperatures have varied from the long-term average, for the globe overall, as well as the Northern and Southern hemispheres. (Source: NCEI/NESDIS/NOAA)

As the map at the top of this post shows, abnormally cold temperatures in northeastern Canada, southern Greenland and central Russia helped hold the global average down a bit. In most other regions, warmer than average temperatures â€” and in some cases record-warmth â€” prevailed. According to NOAA:

The most notable warm temperature departures from average during May 2018 were present across much of the contiguous U.S. and Europe, where temperatures were 3.0Â°C (5.4Â°F) above average or higher . . . Record warmth was observed across parts of North America, Europe, Asia, as well as the Atlantic, Pacific, and Indian Oceans.

NASAâ€™s temperature anomaly map above shows relatively intense warmth across large swaths of Antarctica. This region of the world is of particular concern because of recent news that melting ice there is causing sea levels to rise faster now than at any time in the past quarter century. From a NASA release last week:

Ice losses from Antarctica have tripled since 2012, increasing global sea levels by 0.12 inch (3 millimeters) in that timeframe alone, according to a major new international climate assessment funded by NASA and ESA (European Space Agency).

The results were published last Wednesday in the journal Nature.

An El NiÃ±o is currently gestating in the Pacific, with a 65 percent change of developing next winter.

If it does, temperatures could get an extra boost in 2019 â€” over and above human-caused global warming. Stay tunedâ€¦