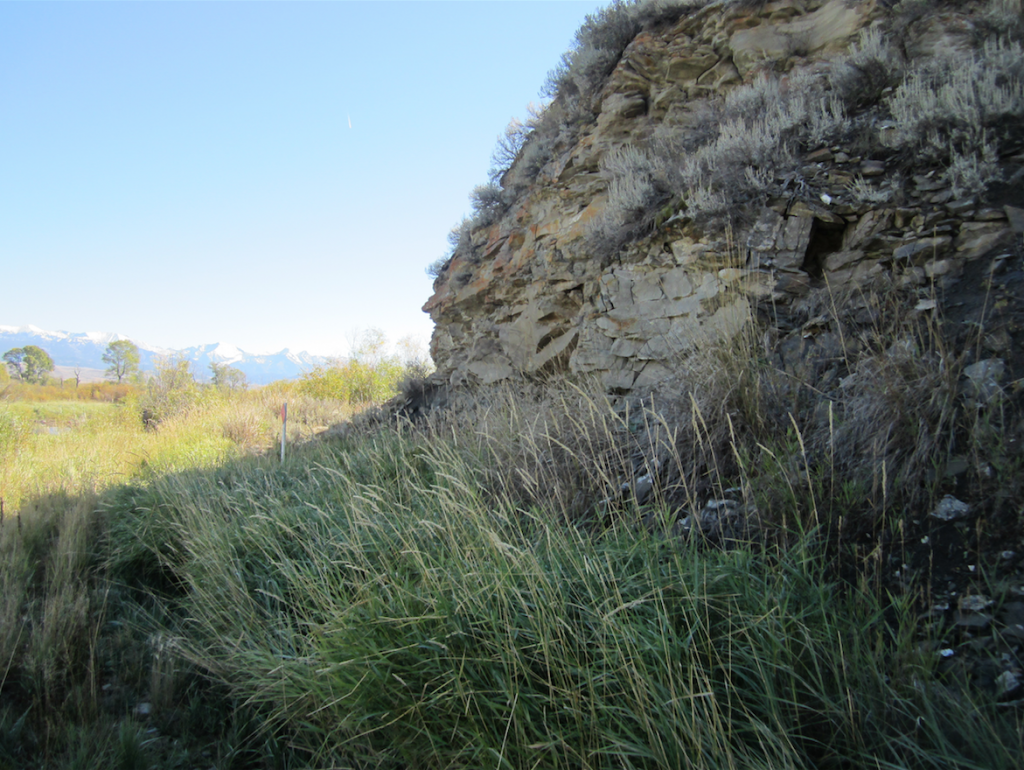 A white post to the left of the cliff base marks the location where the grave of Anzick-1 was found half a century ago. (Credit: PNAS)

He is arguably the most famous ancient American baby: an infant First American whose partial remains were found 50 years ago on a Montana ranch. But while Anzick-1, as the child is known, changed our understanding of the human history of the Americas, critics have complained the dates around the burial are messy, and throw the significance of the site into question.

Today, researchers announce the results of a second look at the dating discrepancy thatâ€™s caused controversy over the famous grave.

Although the childâ€™s remains were first discovered during construction work in 1968, Anzick-1 was known mostly in academic circles until the last half-decade or so. Then, researchers successfully extracted and sequenced ancient DNA (aDNA) from the infant: the first ancient American genome. The aDNA established that Anzick-1 was related to earlier Siberian populations; it also showed that Anzick-1 was closer genetically to modern Native Americans, particularly indigenous groups in Central and South America, than any other group.

Those two aDNA findings provided genetic evidence that the First Americans arrived from Siberia, and that their population diverged into different geographically organized groups earlier than thought.

Anzick-1 was important well before anyone attempted to retrieve his genome, too. Based on artifacts found with the childâ€™s remains, including stone tools and worked antlers, all of them stained with ochre, researchers championed the grave site as the only known burial associated with the Clovis culture.

(Clovis starts showing up in the archaeological record about 13,000 years ago and has generally been considered the first widespread indigenous culture in the Americas. Though, as in any area of paleoanthropology, the staked claim for Clovis culture has not been without challenges; some archaeologists believe sites in both North and South America hint at a much earlier human arrival, bringing different cultural elements.)

But there was one big problem with the Anzick site.

For decades, different researchers have tried different ways of dating the materials found at the site, and the numbers have not always matched up. The artifacts appear to be solidly Clovis in both age, about 13,000 years, and style. Anzick-2, a partial skull found nearby but not associated with Anzick-1 or the grave goods, has been consistently dated as less than 10,000 years old.

But Anzick-1 himself has proven to be a puzzle, with a number of previous attempts at dating his remains coming up considerably younger, by centuries and even millennia, than the artifacts in his grave.

In the latest attempt to resolve the dating discrepancy, researchers obtained samples of both Anzick-1 and Anzick-2, as well as two antler artifacts.

Each of the samples was portioned and prepared using four different pretreatment methods â€” three involved various ways of decontaminating the collagen to be tested and the fourth required the extraction of a single amino acid, hydroxyproline (HYP), from the bone collagen. The samples were then radiocarbon dated.

The results for the antler pieces and Anzick-2 were consistent across all four pretreatment methods, as well as with earlier studies that had dated them. The antlers landed in the 13,000 year age range, while Anzick-2 came up less than 10,000 years old.

The three methods involving collagen decontamination placed Anzick-1 at less than 12,000 years old, more than a millennia younger than the artifacts.

The HYP extraction and dating method, however, suggested the infant was almost as old as the artifacts.

The authors say that HYP, never before attempted on Anzick-1, is considered more precise and less prone to contamination-related errors. Contamination would, they say, explain why the other three pretreatment methods â€” and previous attempts to date the remains â€” would turn up different results.

Based on the HYP test, says the team, Anzick-1â€™s age should be considered resolved: He was a baby of the Clovis culture, and laid to rest with items from it in what remains the only known grave from that period in the Americas.

The study appears today in the journal PNAS.