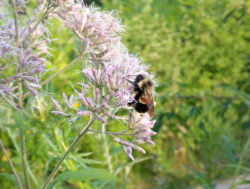 The United States Endangered Species Act is often considered to be the most powerful piece of environmental legislation not just in the US, but in the world. As a result, when the U.S. Fish and Wildlife Service (USFWS) formally lists a species as either threatened or endangered, it can be a game-changer for the species in question, protecting and even recovering a plant or animal that would otherwise be headed towards extinction. Such an action usually garners a fair amount of notice among conservation biologists and environmental advocates.

When the USFWS determines whether a species will be listed as endangered, they do so by creating a comprehensive species status assessment, a lengthy scientific document that analyzes all the available data on the species in question, conservation threats, and overall likelihood that the species will go extinct. The species status assessment for the rusty patched bumble bee was able to use high quality citizen science data from the projects like Bumble Bee Watch, and these monitoring efforts were some of the few factors the assessment found to be acting in favor of the bee. That means that you can help the rusty patched bumble bee recover by collecting citizen science data!

Volunteers with Bumble Bee Watch submit photos online of bumblebees that they’ve spotted, along with date, time, and location information. Once the observation has been added to the Bumble Bee Watch website, the project’s bumble bee experts determine what species is in the photo. That’s good news, because with dozens of species in North America and hundreds worldwide, it can be difficult for citizen scientists to know what species they have photographed. Some volunteers, however, become quite adept at identifying different species, and the project’s website has photos and information describing each North American species of bumble bee.

Some volunteers photograph the bees on their own, while others join local groups that conduct coordinated monitoring efforts. In Wisconsin, the University of Wisconsin-Madison Arboretum trains and coordinates bumble bee monitoring throughout the southern part of the state. The Arboretum and other locations in Wisconsin are home to some of the last known populations of the rusty patched bumble bee, making a concerted effort to monitor them with citizen science even more important.

What does it take to collect data on bumble bees? Susan Carpenter, who coordinates the Arboretum’s bumble bee citizen science efforts, says volunteers need “interest, curiosity, and a bit of patience.” She also emphasizes the importance of carefully photographing every bee that is seen. “We aim for multiple images of each bee: top, side and front views are helpful for identification.” This is crucial in helping the Bumble Bee Watch experts make an identification; some species can only be differentiated from certain angles. Organizations like the Arboretum offer training in photographing bees, but if you don’t have a monitoring group near you, the Bumble Bee Watch website provides excellent tips and instructions on how to photograph bees for easiest identification. And don’t worry; your photos don’t have to be beautifully framed or perfectly lit. They just need to capture different sides of the bee. It might take a few tries to get it right, especially if the bee is moving around, but that’s where Carpenter’s suggestion for patience comes into play! 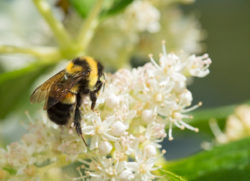 The rusty patched bumble bee was once abundant throughout the midwestern and northeastern United States and into Canada. Now only a few populations remain. Some populations of rusty patched bumble bees might be as yet unknown, and perhaps equally as important, data is urgently needed on many of the other bumble bee species in North America. And because bumble bees don’t recognize international boundaries, Bumble Bee Watch volunteers can submit data from the United States as well as Canada. Carpenter notes that reports of other species are “informative, as some other species are imperiled, rare, or lacking in baseline information. It is important to document even the common species.” After all, not too long ago, the rusty patched bumble bee was considered common, and now it’s in need of our help.

The next time you see a bumble bee, take a few pictures and submit them to Bumble Bee Watch. You can contribute to understanding and protecting these amazing animals, and you might even find a rusty-patched bumble bee!

Eva Lewandowski is SciStarter’s Newsletter Editor and Coordinator, as well as the Citizen-based Monitoring Coordinator for the Wisconsin Department of Natural Resources. She holds a PhD in Conservation Biology from the University of Minnesota. Find her on twitter as @LewandowskiEva.