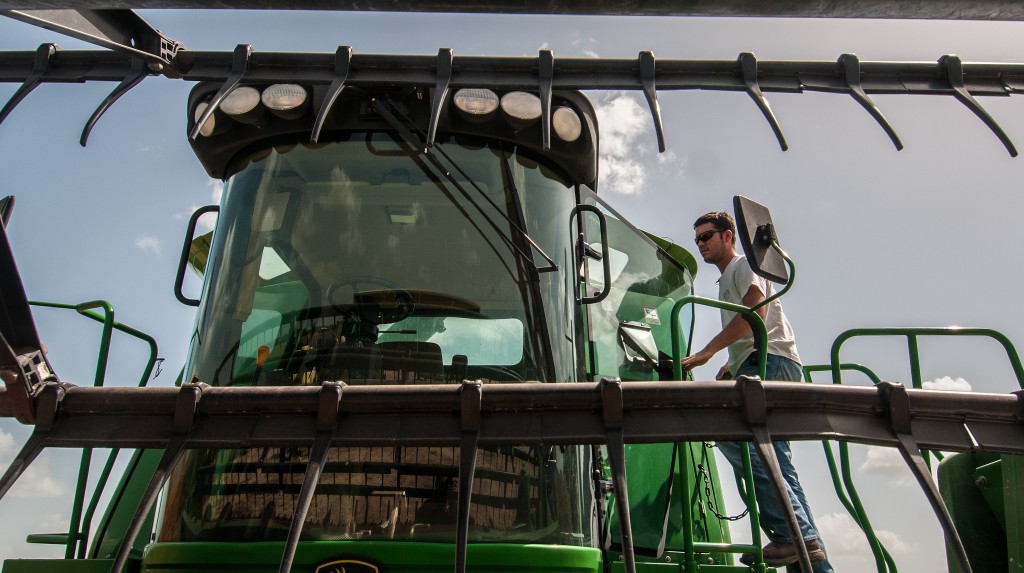 A farmer climbs into a combine. (Credit: USDA/Lance Cheung)

Most people think of frost as a farmer’s worst nightmare. But for corn growers in Illinois, there’s little worse than a warm, soggy spring. Rainfall can soak soft prairie soils and rot the kernels before they can grow. If the rains keep farmers from their fields long enough, crop yields start to plummet. Rain can also wash away herbicides, pushing growers to apply more.

For years, this fear has driven farmers to plant earlier and earlier. Late April used to be the prime planting window. This year, weather permitting, many will begin planting this week.

Emerson Nafziger, University of Illinois extension specialist, says each year he hears stories of people planting earlier than the last. Some of those are just tales for the coffee shop, he says. This year he heard rumors of people planting in February. But he’s seen the trend himself over recent decades. Though he points out that seed treatments and high-tech farm equipment are as responsible for jumping the gun as the weather.

“Forty years ago a farmer with good conditions the first week of April almost certainly would not have planted,” he says. “It was seen as too risky. Today that’s not the case.”

These trends, along with a string of wet springs late in the last decade, prompted U.S. Department of Agriculture scientist Adam Smith to investigate how planting windows might shift even more with climate change in the years to come.

He and his colleagues used the latest climate models to see what might happen in Illinois down the road. They found spring continues to get warmer and wetter. But summers also get hotter and drier. Both of those are bad for crop yield. If the plant overheats while it’s maturing, it makes less corn. It can also freeze in the ground.

Their models show two planting seasons emerge in the future. One happens in March, as warmer winters let farmers plant earlier and earlier. The other comes between May and June, after the soggiest weather but before the heat.

“The season fragments and we start to see an early-early season, so that March starts looking like a good target for planting in the future,” he says. “In the past, March has been the bleeding edge. Nobody in their right mind would have planted then. But we’ve already seen the trend for early planting.”

Timeliness has always been vital in farming, but soon many Midwest growers will have to decide between these two contrasting strategies. Do they plant early and risk the cold, or do they plant late and risk the heat?

“There’s a clock ticking as soon as it begins to warm up in the spring and the field is plantable,” Smith says.