The Coffin Birth of Liguria: The Science Behind A Sad Story 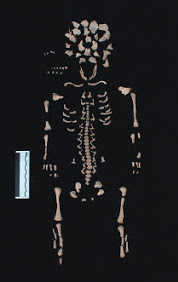 For one unfortunate medieval Italian, the cradle was the grave. It’s commonly called coffin birth, though researchers use the terms post-mortem fetal extrusion or expulsion. And yes, it is what you think it is — but the latest case documented by scientists, from 14th century Liguria, reveals there was more to the story.

A re-examination of a medieval grave outside Genoa, Italy, that was first discovered in 2006 has given researchers more information about the individuals buried in it. The grave is dated to the second half of the 14th century, around the time of the Black Death.

The infamous outbreak-turned-pandemic of plague got a toehold in Europe via the port of Genoa and over the next few years spread rapidly throughout the continent and around the Mediterranean. Reasearchers believe up to half of the European population perished.

But that’s the big picture. Let’s focus instead on a very small piece of that story and the increasingly intimate portrait of plague victims that science is allowing us to see.

Recently in Anthropological Science, researchers reported new details from the four skeletons found within a single Black Death-era grave less than 50 miles from Genoa. The grave was one of several at an ospitale (hospital) along a common trade and pilgrimage route between northern Italy and Rome.

Don’t let the word hospital fool you: In medieval Italy, these were not medical centers but more like highway rest stops, where travelers could get a meal and some rest before carrying on.

The grave in question was the only one with multiple individuals. It held a woman in her 30s, a juvenile of about 12 and a child that was around three years old.

There was a fourth skeleton in the grave: that of the woman’s near-term fetus, estimated to be 39-40 weeks old. After death, gases build up inside a body which can, for women who were pregnant at time of death, cause the expulsion of a fetus. This is known as post-mortem fetal expulsion (also called post-mortem fetal extrusion, as it is in the most recent paper) or, more commonly, coffin birth. 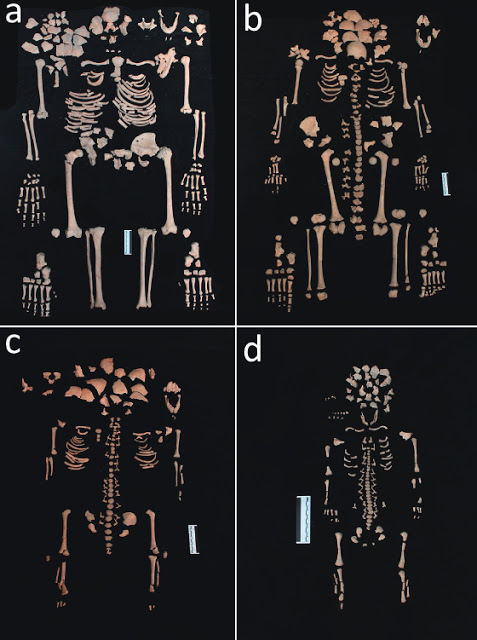 Four skeletons found in a single medieval Italian grave tell a grim story of life during the Black Death. A pregnant woman in her 30s (a) was buried with a 12-year-old (b) and a 3-year-old (c); after death, her near-term fetus (d) was expelled in an event researchers call post-mortem fetal extrusion. (Credit D. Cesana et al 2017)

Antigens for the Yersinia pestis bacterium were found in three of the four bodies in the grave (the three-year-old tested negative), indicating they had likely died from plague. It’s the first plague burial conclusively identified in the area.

Other details gleaned from the gravesite: the woman was 30-39 years old and stood about 5’1″ in life, though it wasn’t easy for her to do so. There’s evidence she suffered from hip abnormalities and may have had the painful Legg-Calve-Perthes disease; she likely walked with a limp.

The 12-year-old, gender unknown, appears to have suffered from scurvy. Researchers have not yet reported whether the juvenile and younger child were related to the woman.

Also still unknown: Why a pregnant woman for whom walking was difficult, and two children, were traveling a mountainous road when they died. The ospitale of San Nicolao, where their remains were found, is about 2,600 feet above sea level.

Give the paper a read yourself (the full pdf is available for download for free); its introduction includes a quick primer on when and how the Black Death took hold in Europe.

One Grave Among Many

The bubonic plague pandemic known as The Black Death spread both overland and via maritime trade, eventually killing up to half of the European population in less than a decade. In 2011, researchers published a genome of the Y. pestis bacterium responsible, which has allowed science to better understand both the historic pandemic and the risk humans face today of a plague encore. The spread of the Black Death across Europe and the Mediterranean. (Credit: D. Cesana et al 2017)