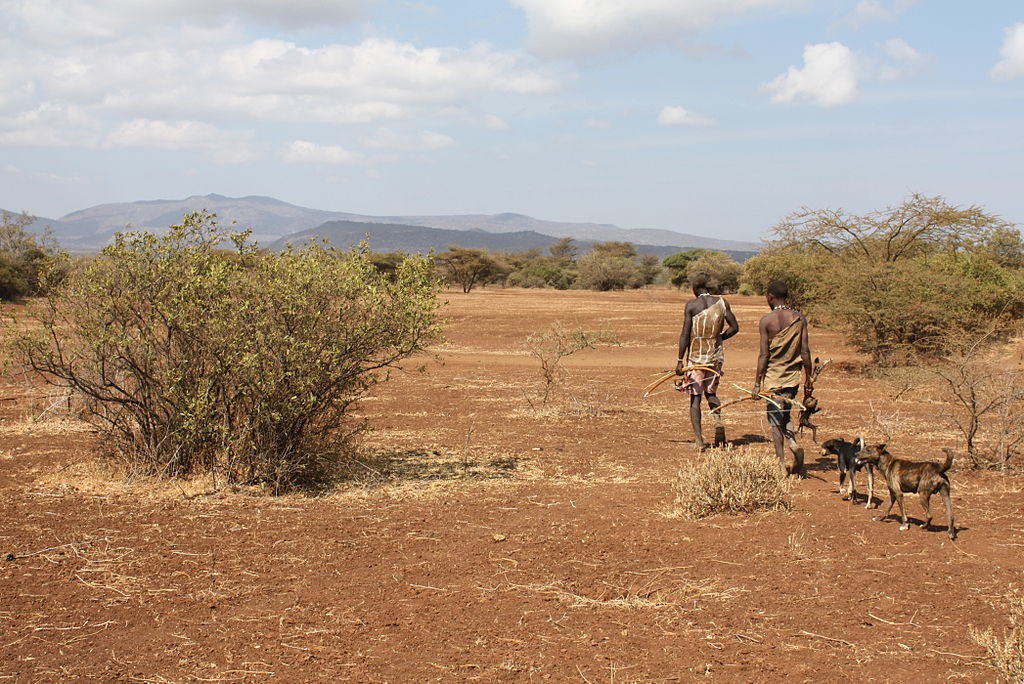 Two Hadza hunters returning from a hunt. A new study of chronotypes, or sleep and activity patterns, among the Tanzanian hunter-gatherers sheds light on the evolutionary advantages of staggered snoozing. (Credit Wikimedia Commons/Andreas Lederer)

In the jungle, the mighty jungle, the lion sleeps tonight… catchy song, even if it misrepresents Panthera leo.

Lions, like many other predators, are opportunistic about when they hunt, and that includes plenty of nocturnal prowling. New research suggests variation in chronotypes, or sleep and wakefulness patterns, gave our ancestors an evolutionary advantage by helping them survive the dangerous hours of darkness. Remember that the next time you’re wide-eyed at 2 a.m. watching Law & Order reruns.

Chronotypes are nothing new to science. But whether you were born a night owl or early bird, or somewhere in between, as you age your chronotype usually changes in a predictable way: You generally go to sleep (and wake up) earlier, sleep less overall, and, when you do sleep, it’s more likely to be a light slumber rather than a deep, drool-on-the-pillow kind of snooze.

Insomnia and restless sleep are common complaints among older adults, but researchers behind today’s study think these may be less disorders and more hand-me-downs from our distant ancestors. They’re calling the notion “poorly sleeping grandparent hypothesis.”

I know, I know, it doesn’t exactly glide off the tongue, but it does raise some interesting ideas about why there’s such a range of chronotypes and why they change with age.

You Snooze But Don’t Lose

Researchers recruited 33 men and women, ages 20 to 60, from the Hadza people of Tanzania. The Hadza are a popular go-to group for researchers, who have studied, among other things, their gut microbes, energy expenditure and finger lengths. I don’t know how the Hadza feel about all this poking and prodding, but I hope they’re okay with it, because they are providing science with a mass of data not otherwise available.

Here’s why: The Hadza are hunter-gatherers whose lifestyle is very similar to that of early humans. They live in groups of 20 to 30 in northern Tanzania, in a savannah environment mixed with woodland and without — key for this study — artificial light or climate control (and definitely no access to Law & Order reruns).

The 33 study participants agreed to wear wrist monitors that kept track of their nighttime activity for a 20-day period. When researchers tallied up the data, they found that individual chronotypes varied widely and that the group was almost never all asleep at the same time.

Out of more than 220 hours during which data was collected, there were only 18 minutes, spread out in one-minute increments among 20 nights, when all 33 participants were soundly asleep. On a per-night basis, roughly eight individuals in the group were awake at any given time.

Having multiple individuals either awake or in a light, easily-roused state of sleep throughout the night provides support for the sentinel hypothesis, first laid out in 1966 by Frederick Snyder. The idea was that humans, like many other social animals, need to sleep and can do so safely if some members of the group remain vigilant to external threats, such as predators.

Snyder also suggested that brief periods of wakefulness between episodes of deep sleep allowed individuals the chance to take stock of their surroundings and detect potential threats.

Meanwhile, having someone else in the group awake for a while and alert for lions and whatnot allows other individuals to get a chunk of quality sleep, which is crucial for cognitive functions, including memory.

Following the logic, sentinel behavior resulting from varied chronotypes would have made early human groups both safer during the night and better prepared, cognitively, for whatever the day brought. That’s especially true for younger members of the group, with still-developing brains.

An Evil or Just Evolution?

The researchers behind today’s study found that individuals’ chronotypes were not sex-specific, nor could they be predicted by factors such as number of co-sleeping children. Instead, age seemed to be the predictor of chronotype. Participants in their 50s and 60s generally went to sleep earlier and woke earlier than those in their 20s and 30s.

Ancestral hunter-gatherer groups almost certainly consisted of members of all ages, like the Hadza today. It’s plausible to believe that those sleepless grannies and grampas were actually exhibiting normal, healthy chronotypes by being awake when the younger generations were catching Zs.

Today, however, periods of wakefulness and chronotypes out of sync with the 9-to-5 workday are typically seen as disorders; artificial lighting, too much air conditioning or heat and other modern lifestyle factors are often blamed. Insomnia in particular is a common complaint of older adults, notes the study. The new findings suggest, however, that what we seek treatment for today might just be normal behavior, a legacy handed down from our ancestors.

While the sentinel hypothesis of staggered sleep schedules within a group has been observed in some birds and rodents, today’s study, published in Proceedings of the Royal Society B, is the first time it’s been documented in humans. 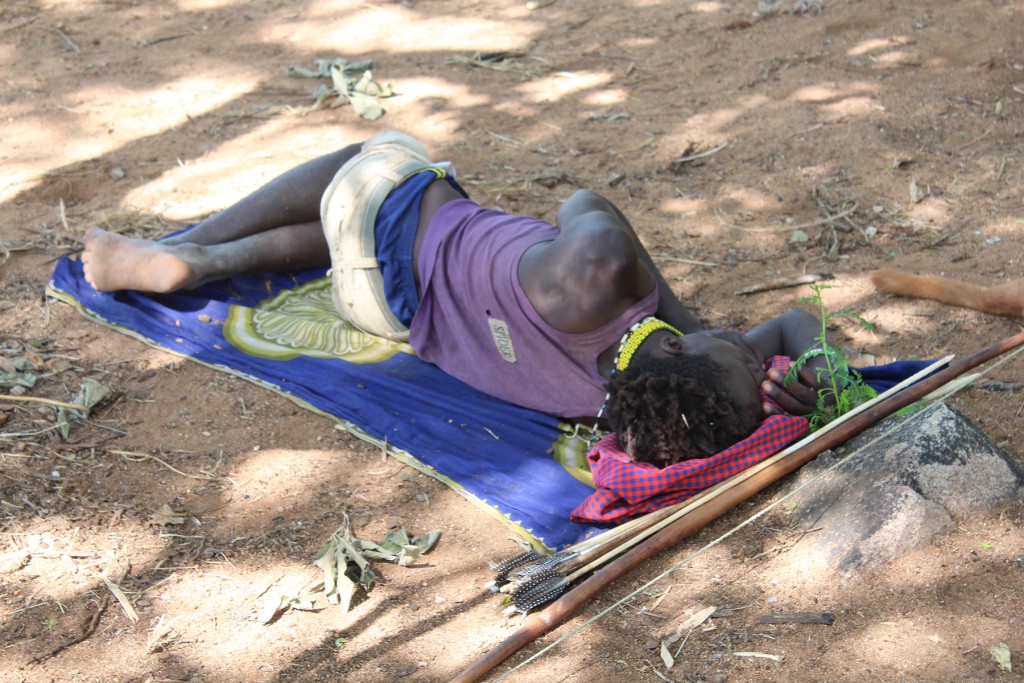 A Hadza man napping now will likely be awake when other members of his community are fast asleep thanks to a varied range of chronotypes that was once essential for survival. (Credit David Samson)