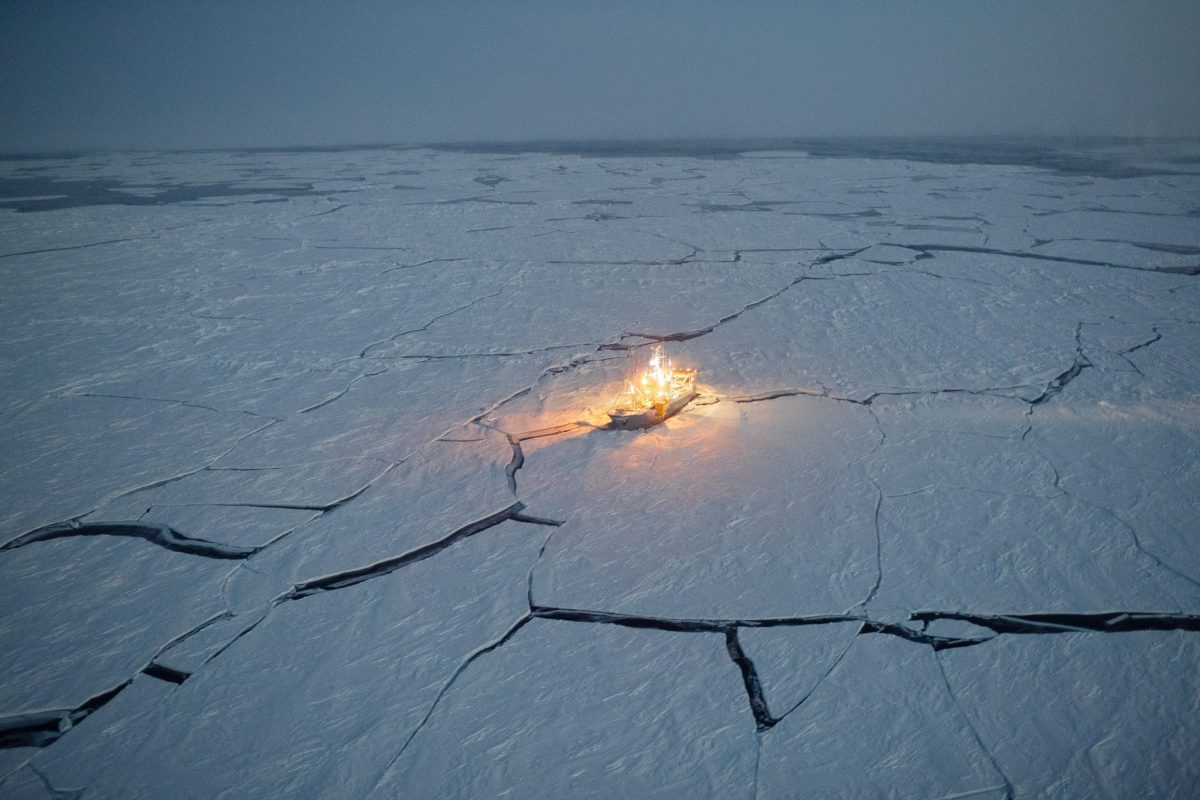 During the N-ICE2015 expedition, scientists froze their boat, the Lance, into the Arctic sea ice to gather data from January to June of 2015. (Source: Norwegian Polar Institute)

During each of the past three years, something quite bizarre has happened in the central Arctic.

No, global warming did not cause some Thing to rise up out of the ice and go on a rampage. It was temperatures that rose up. And not just by a little.

This occurred during extreme warming events near the North Pole that sent temperatures spiking close to, or above, the freezing mark for one to three days. Compare that to average winter temperatures in winter: typically lower than minus 30 degrees Celsius, or -22 F.

Arctic warm spells in winter are by no means unheard of. But were the extreme conditions seen during the last three years a sign that warm episodes are becoming more common than in the past? And has the duration of warm episodes in winter been increasing?

A new study published this week in the journal Geophysical Research Letters finds that the answer to both questions is yes.

Since 1980, an additional six warming events — defined as temperatures rising above -10 degrees C, or 14 F — are occurring each winter in the North Pole region, according to the study by a team of Norwegian, American and German scientists. In addition, the average length of each event has grown from fewer than two days to nearly two and a half days. 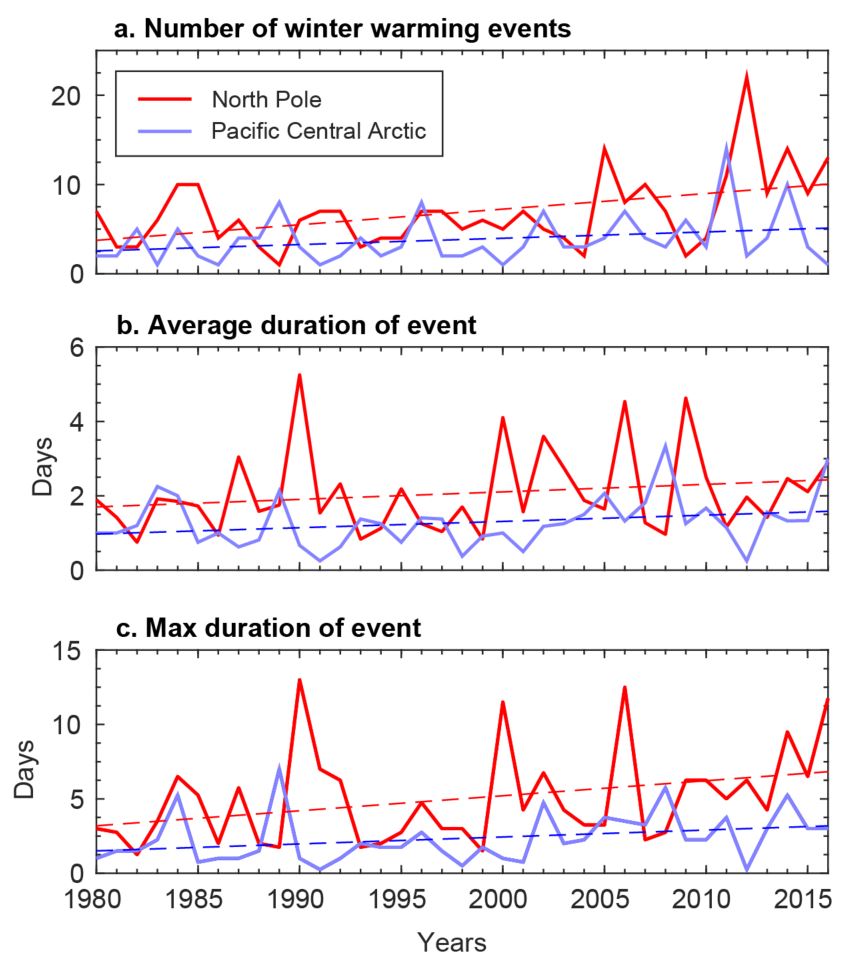 To arrive at their conclusions, the researchers analyzed weather data dating back to the late 1800s from a variety of sources. This included the historic Fram expedition of 1893 to 1896, during which famed Norwegian explorer Fridtjof Nansen and his crew froze themselves into the Arctic sea ice aboard their wooden ship the Fram. While they drifted with the ice, the crew collected some of the first weather observations in the high Arctic.

The scientists also crunched data collected by manned Soviet North Pole drifting ice stations from 1937 to 1991, as well as from drifting ocean buoys. And they used a reanalysis of global atmospheric data called ERA-Interim. 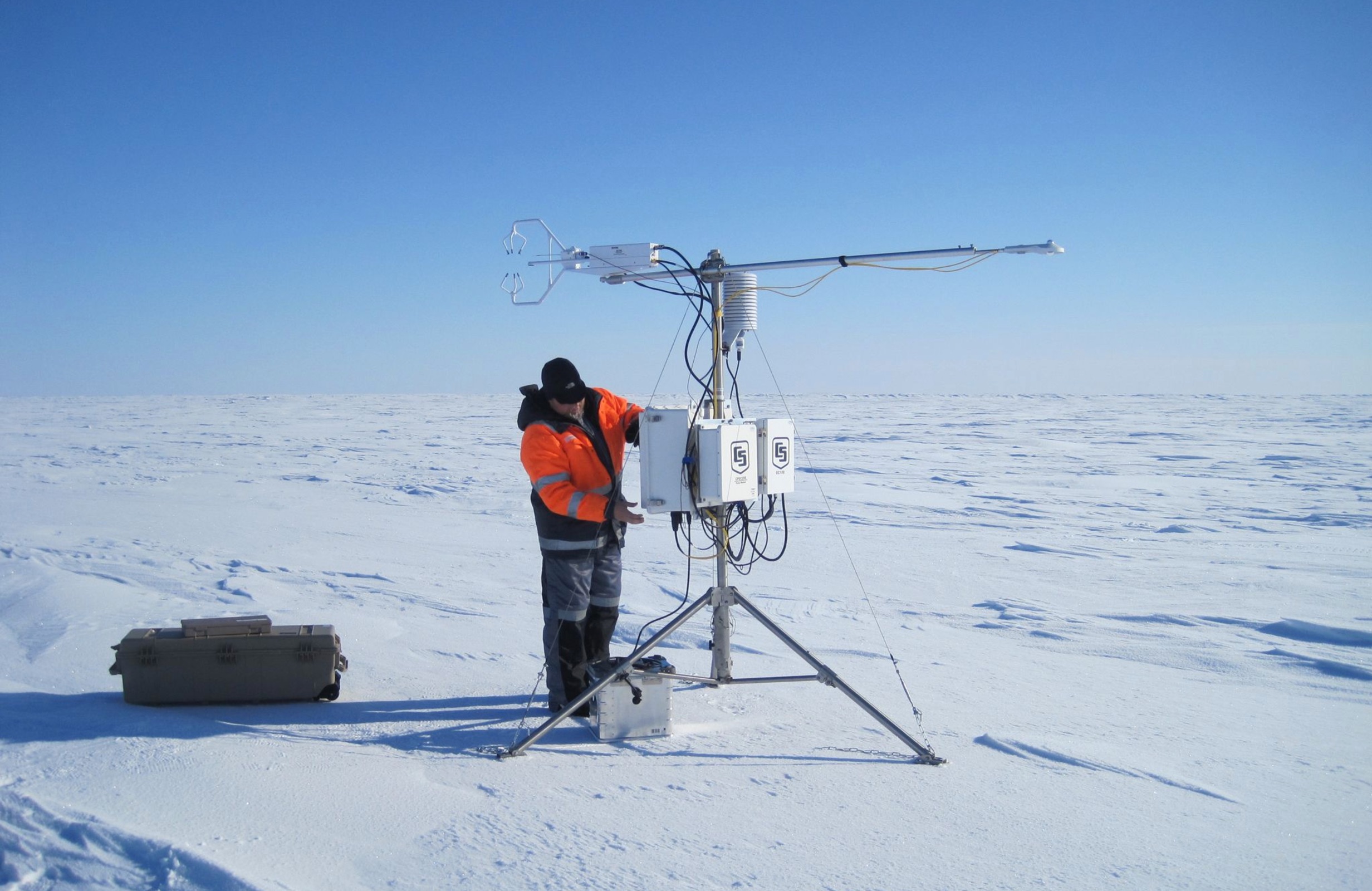 Out on an Arctic Ocean ice floe, a researcher from the Norwegian N-ICE2015 expedition adjusts an instrument that measures wind and temperature. (Source: Mats Granskog/Stephen Hudson, Norwegian Polar Institute)

They discovered that winter warming episodes have occurred across most of the Arctic Basin for more than a century. The crew of the Fram expedition, for example, recorded a temperature of −3.7°C (25 F) just 400 miles from the North Pole in March 1896.

In fact, researchers found that temperatures spiking to near the melting mark in the central Arctic during the last three winter seasons were “not unprecedented.”

But the warming events of the past were not as long-lasting or frequent as those being observed now. Moreover, maximum winter air temperatures at the North Pole increased between 1980 to 2016 at a rate of about 0.70°C per decade.

These trends are due to an increased number of distinct winter warming events and an increase in the average length of a single event. These patterns are consistent with recent studies that have indicated part of the rapid rise in Arctic winter temperatures may be linked to the increased occurrence of winter storm events or moisture intrusions, which transport warm and moist air into the Arctic from the midlatitudes

In fact, in the most recent years of the study, strong winds swirling around frequent major storms swept huge amounts of warmth and moisture from the Atlantic Ocean into the central Arctic.

While significant natural variability in the Arctic (e.g. oceans/weather), there is also an observable trend…

“The warming events and storms are in effect one and the same,” said Robert Graham, lead study author and a climate scientist at the Norwegian Polar Institute in Tromsø, Norway, as quoted in a NASA press release. “The more storms we have, the more warming events, the more days with temperatures less than minus 10 degrees Celsius (14 degrees Fahrenheit) rather than below minus 30 degrees Celsius (minus 22 degrees Fahrenheit), and the warmer the mean winter temperature is.”

How much is human-caused climate change to blame? That’s a subject for further study. But already there is evidence that such storms are becoming more frequent and having a larger impact.

Shrinking sea ice cover due to climate change seems to be playing a role. As the edge of Arctic sea ice near Norway has retreated, that has allowed warm surface waters to move closer and closer to the North Pole in winter. That, in turn, can help rev up storms moving from the Atlantic into the Arctic.