A Delaware-sized Antarctic Iceberg Has Broken Into the Ocean 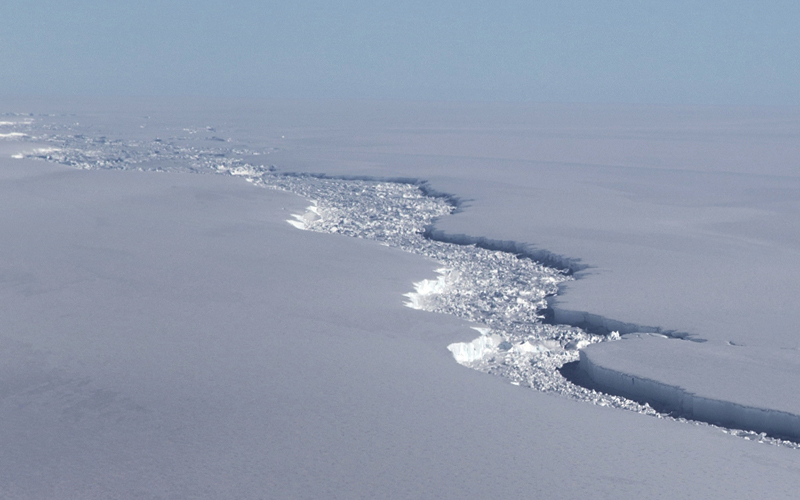 A 70-mile-long crack runs across the Larsen C Ice Shelf on the Antarctic Peninsula, months before it calved into the ocean. (Credit: Jeremy Harbeck)

After months of dangling on by a miles-thin thread of ice, an iceberg roughly the size of Delaware just calved off Antarctica’s Larsen C ice shelf and began drifting out into the ocean.

Scientists say the complete breakthrough happened sometime between July 10 and today, July 12. It was spotted by NASA’s Aqua MODIS satellite instrument. And after months of satellite photos showing the crack grow larger, the final break wasn’t a surprise.

But this trillion ton iceberg, likely to be named A68, was already floating, so it won’t contribute to sea level rise. The larger concern is what comes next for the rest of Larsen C, which still has some 90 percent of its original size.

Will the ice shelf grow back, or will it collapse?

For 15 years, scientists have kept a close watch on Larsen C. This ice shelf – a floating patch of ice pushed from a land glacier – is the largest along the Antarctic Peninsula’s coast. The narrow and mountainous peninsula sticks out some 800 miles north from the continent toward Chile. And that location means the region has warmed at least twice as fast as Earth’s overall average.

Several ice shelves have already collapsed here. Larsen A, at the peninsula’s northern tip, crumbled in 1995. By 2002, its neighbor Larsen B collapsed. Both ice shelves were thousands of years old.

“It constantly blows my mind that these systems can go through that much change so quickly,” says University of Alaska, Fairbanks glaciologist Erin Pettit. “After maybe 100,000 years of ice being there, suddenly there’s no ice.”

But Larsen C is the biggest ice shelf on the peninsula and was the continent’s fourth largest before today. (It’s now the fifth largest). Scientists worry that after this iceberg drifts into the ocean, the shelf behind it might collapse. That’s similar to what happened at Larsen B, which will likely disintegrate completely by 2020.

Research back in 2015 indicated that when Larsen C lost this iceberg, which was still a growing rift back then, the remaining ice shelf would face a “significant risk to stability.”

“In the ensuing months and years, the ice shelf could either gradually regrow, or may suffer further calving events which may eventually lead to collapse – opinions in the scientific community are divided,” says Adrian Luckman of Swansea University, who was involved in the 2015 research and spearheads Project Midas, which monitored the break. “Our models say it will be less stable, but any future collapse remains years or decades away.”

NASA JPL ice shelf scientist Ala Khazendar also cautions that Larsen C’s future remains uncertain. Ice shelves naturally shed icebergs, and this ice shelf could recover and avoid the fate of Larsens A and B.

If the floating Larsen C does collapse, it won’t raise sea levels directly. But once an ice shelf is gone, the glacier feeding it flows faster to the sea. And that will speed up sea level rise. Beyond that, scientists also worry what the collapse would mean for the rest of the continent as warming continues.

“If the fourth-largest ice shelf in Antarctica disintegrates, bigger ice shelves with bigger drainage basins could also be in danger,” Khazendar says.

Scientists see warnings of the chaos to come at Earth’s poles. Discover‘s Eric Betz joined NASA aviators and researchers as they flew over Antarctica assessing the meltdown. Read his full account from the front lines of climate change.