Shape-shifters Once Ruled the Planet 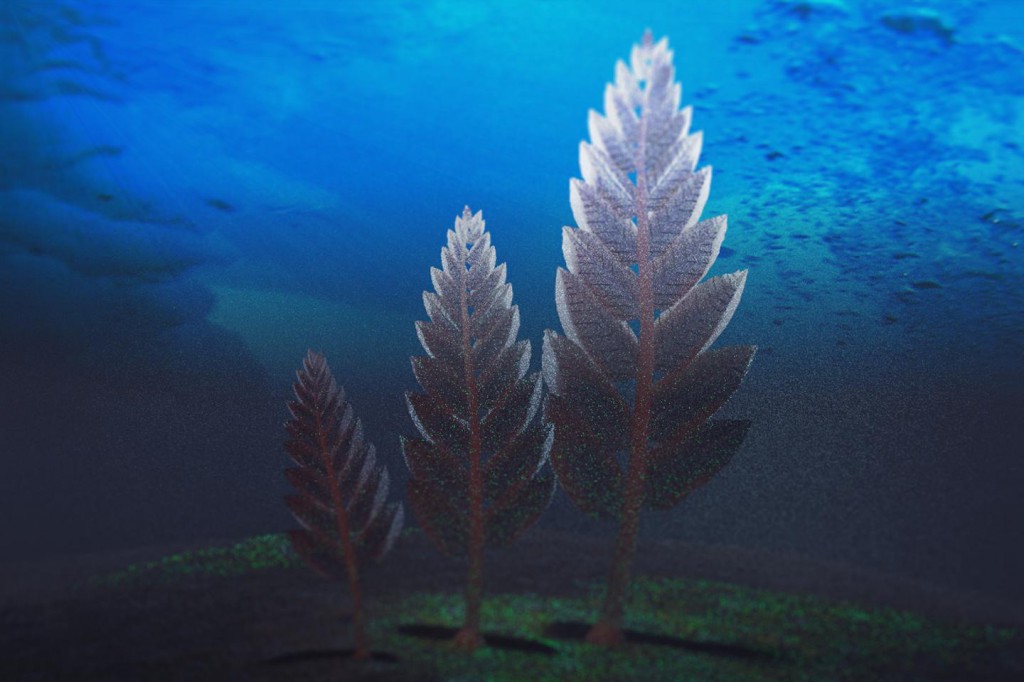 Before sharks and whales ruled the seas as the biggest bad boys (and girls) of the sea, there were rangeomorphs, a bizarre plant-looking-animal-type … thing. They roamed the seas of Earth around 540 million years ago, absorbing nutrients drifting in the water.

Rangeomorphs were the biggest thing in the game — and had the shape-eshifting skills to make themselves as big or as small as they needed. That could range from a few millimeters up to a few meters. While that may not sound huge, this was an era where complex life was rare.

The adaptation likely came about so that rangeomorphs could take advantage of nutrients in a particular area. If oxygen was higher up in the environment, the rangeomorph could grow accordingly, changing its height and “leaf” shape to best absorb nutrients. The leaves grew in fractal-like patterns. The researchers are calling this responsiveness to environment “ecophenotypic plasticity.”

Despite this leaf, certain features of rangeomorphs indicate that they are in a subdomain called opisthokonts, which encompasses animals and funguses (and excludes plants.) Part of this has to do with the environment they developed in. They were in deep dark areas of the ocean during an ice age, unable to access the Sun to utilize photosynthesis as a nutrient source.

“Since many rangeomorphs appear to have inhabited the dark ocean depths, this rules out photosynthesis and means they can’t be any kind of plant or seaweed,” Hoyal Cuthill says. “Given that rangeomorphs are large and quite complex, this suggests they may have been early animals.”

According to the study, published Monday in Nature Ecology & Evolution, sudden changes in ocean chemistry accounts for why rangeomorph sizes seem to range so much in morphology. The catalyst may have been the end of the ice age.

The fossil records of rangeomorphs show the same structure with wildly differing sizes, leaving researchers unable to determine if they were looking at the same creature — or even where this grouping of creatures might fit at a time when there were few, if any, large organisms in the Ediacaran oceans.

“Our study suggests that the adaptations that allowed rangeomorphs to “shape-shift” were, firstly, growth that was strongly dependent on uptake of oxygen and other nutrients, and, secondly, their fractal-like branched body-plan,” Hoyal Cuthill says.

Of course, this all came at a cost — when the Ediacaran era drew to a close, almost everything went extinct. There’s a fossil gap between the end of this era and the beginning of the Cambrian, meaning that exactly what happened can’t quite be pieced together. (Some early Cambrian fossils show signs of being burrowing creatures.)

“It seems that rangeomorphs were amazing at sitting on the Ediacaran sea-floor, taking in nutrients,” Hoyal Cuthill says. “However, this may eventually have left them vulnerable to out-competition and predation by more active animals.”

For a few million years, it seems that rangeomorphs were the rulers of the roost — all thanks to extremely malleable forms they were able to take on. But in the end, that may have cost them dearly, and seemingly left none of its lineage behind.

“There isn’t anything quite like a rangeomorph alive today,” Hoyal Cuthill says. “However, similar patterns of ‘plastic’ growth, with strong environmental effects on size and shape, are seen among living animals especially invertebrates such as sponges.”