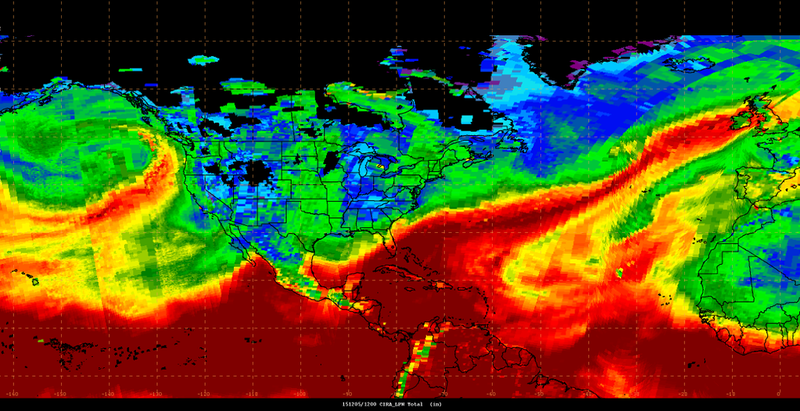 Rivers in the sky may be responsible for up to 75 percent of the largest, most extreme wind and rainfall events that ravage the coasts.

The streams of moisture, called atmospheric rivers, originate in the tropics and often stretch for thousands of miles across the ocean in a thin band. They deliver a deluge of rain that causes major floods, landslides and a rash of insurance claims. In addition to soaking us, a new study shows that atmospheric rivers are also responsible for the powerful winds many of the most damaging storms in Europe.

Rivers Above Our Heads

The term “atmospheric river” first appeared in a 1994 paper by two MIT researchers who described long, thin filaments of moisture that extend from the tropics to more temperate regions. Subsequent studies revealed these sky rivers carry a staggering amount of moisture—one study estimated levels near the average flow of the Amazon river—and their appearance is associated with heavy flooding. Perhaps the most famous atmospheric river is the “Pineapple Express,” a current that delivers moisture near Hawaii to the West Coast.

Atmospheric rivers are common on the Pacific West Coast and Northern Europe, as well as in Australia, New Zealand and South America. Though they don’t last long, the concentrated nature of the current can cause significant damages, and the effect is often worse in mountainous regions where the warm, water-laden air is forced to colder elevations, leading to rapid condensation and torrential rains.

Animation of an atmospheric river event in January 2017. (Credit: NOAA/ESRL/PSD)

Using an algorithm to parse humidity and pressure data from 1997-2014, researchers from NASA’s Jet Propulsion Laboratory and UCLA have tied the rivers to instances of uncommonly strong winds in addition to flooding. In their paper, published Monday in Nature Geosciences, they say atmospheric rivers are associated with half of the strongest wind gusts recorded over nearly two decades.

The researchers study backs up the correlation between the most economically damaging storms and atmospheric rivers. They say that 14 of the past 19 storms in Europe that caused over $1 billion in damage were associated with the presence of an atmospheric river.

In the United States, the story is similar: Atmospheric rivers may cause up to 80 percent of major floods in California, and likely played a role in the so-called “Snowmageddon” event that blanketed the East Coast in 2010. The authors estimate that atmospheric rivers hit most coastal areas 40 days a year on average, or once every nine days. While not all are associated with intense weather, they are highly correlated with the most extreme events.

Still to come is research into whether climate change will affect the flow atmospheric rivers. As with other storm patterns, it could shift their normal routes and increase their strength.