This Squid Gives Better Side-Eye Than You 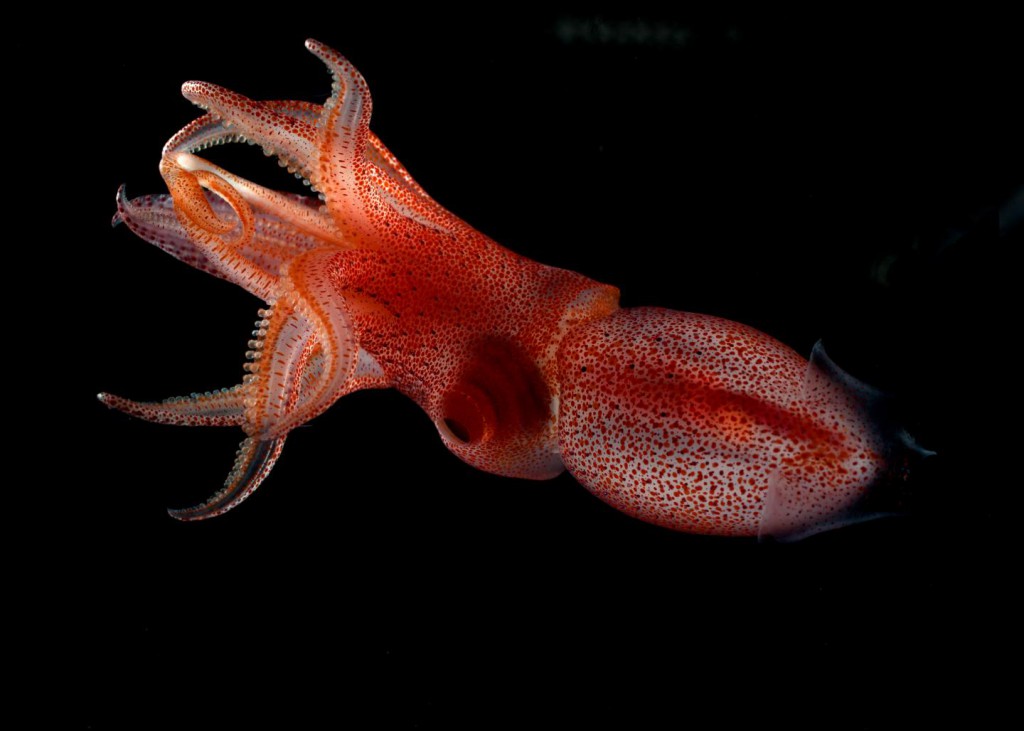 Yes, this cephalopod is looking at you funny. It’s a kind of cockeyed squid—an animal that looks like some jokester misassembled a Mr. Potato Head. One of the cockeyed squid’s eyes is big, bulging and yellow. The other is flat and beady. After studying more than 25 years’ worth of undersea video footage, scientists think they know why.

The Monterey Bay Aquarium Research Institute (MBARI) in California has been dropping robotic submarines into the ocean for decades. The footage from those remotely operated vehicles gets annotated and compiled into a database that’s been used for hundreds of research projects, says Katie Thomas, a graduate student at Duke University. She decided to delve into this database to figure out why the cockeyed squid is so symmetrically challenged.

In footage that dated back to 1989, Thomas and her coauthors found videotaped encounters with 152 Histioteuthis heteropsis and 6 Stigmatoteuthis dofleini. These are two of the 18 species of cockeyed squid. (They didn’t try to identify individual animals—due to “the vastness of the habitat,” they write, it’s unlikely that their robots ran into the same squid twice.) 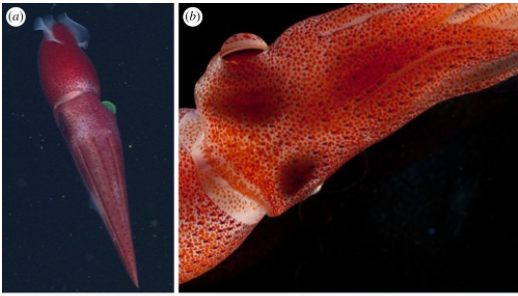 Both species, Thomas saw, swam with their big left eyes angled upward and their tiny right eyes angled slightly down. All the animals kept their arms and heads pointed toward the seafloor and their mantles upright or at a tilt, as in the image on the left above.

In most adult squid, the left eye wasn’t just big and bulging—it was also yellow. Young squid didn’t have this yellow pigmentation, which means the left eye probably turns yellow as a squid grows up. Human eyes carry pigment in the iris. But, Thomas points out, squid eyes have their yellow pigment right in the lens. “These deep-sea squids don’t have corneas like us,” she says, “so the lens sticks directly out of the eye and is the part of the eye you see in the images.”

The lens of a squid’s smaller eye is “perfectly clear,” Thomas says. “This makes it look clear from the side but black when you’re looking straight down it.”

Yellow lenses are common in deep-sea fish that face upward. This may help them see prey swimming overhead. Some ocean animals produce light as a kind of camouflage, so that predators underneath them can’t easily spot their silhouettes against the sunlight. But yellow lenses may help predators like the squid see through this camouflage. The researchers found that a cockeyed squid’s pigment filtered light with a similar wavelength to that of sunlight shining down into the ocean.

They used computer modeling to learn more about how these animals see. “Squid eyes are optically very similar to cameras,” Thomas says. The researchers wanted to know why the two eyes had such a dramatic difference in size, which is like the aperture of a camera. They used a simple simulation to model how different eye sizes and different amounts of light would change what a squid saw. Since all the light in the ocean comes from straight overhead, how much light reaches an animal’s eye depends on the eye’s angle.

“What we found was that an upward-facing eye has high gains for fairly small increases in eye size,” Thomas says. “A downward-facing eye gets relatively little improvement from similar increases in eye size.” In other words, it’s worthwhile for a sea creature to put its resources into growing a bigger eye, if that eye points up toward the sun. But it’s not worthwhile for an eye that points down. “This helps us to understand how this difference in eye size might have evolved,” Thomas says.

With its big, yellow, upward-facing eye, a cockeyed squid can scan for prey that light up to camouflage themselves against the sunlight—such as shrimp, lanternfish, and other cephalopods. Its beady, downward-facing eye is good enough to see creatures lighting up against the blackness below.

Thomas says she isn’t sure why the eyes are angled, rather than pointing straight up and straight down. It may have to do with the vertical position the squid like to swim in, as well as that they probably evolved from squid with normal, horizontally oriented eyes. But, she adds, each eye has a broad enough field of view that a cockeyed squid can see fully above and below itself even while swimming upright.

Thomas notes that understanding the cocked eyes of the cockeyed squid wouldn’t have been possible without the decades of scientific monitoring that came before her. “It’s fun to think that while I was still crawling around in diapers, MBARI scientists were out collecting video data that I would someday use for my PhD research,” she says.