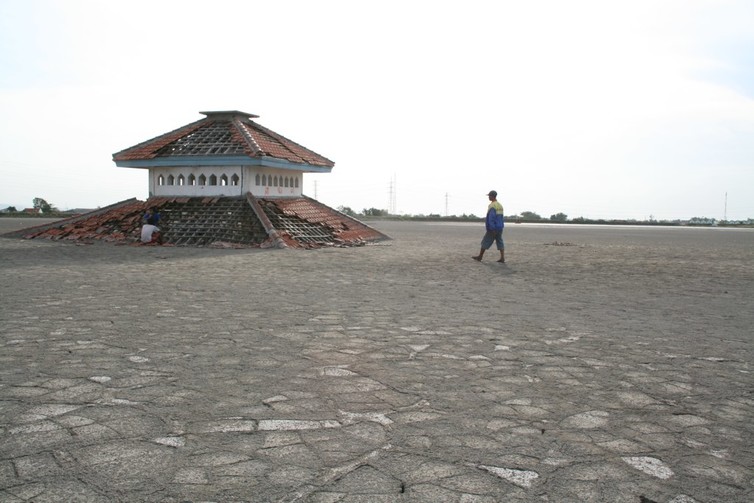 The world’s most destructive mud volcano was born near the town of Sidoarjo, on the island of Java, Indonesia, just over 11 years ago – and to this day it has not stopped erupting. The mud volcano known as Lusi started on May 29, 2006, and at its peak disgorged a staggering 180,000 cubic meters of mud every day, burying villages in mud up to 40 meters thick. The worst event of its kind in recorded history, the eruption took 13 lives and destroyed the homes of 60,000 people. But although the mud is still flowing more than a decade later, scientists are not yet agreed on its cause.

The debate is whether the eruption of Lusi was due to an earthquake several days previously, or down to a catastrophic failure of the Banjar Panji 1 gas exploration well that was being drilled nearby at the time. Given the huge impact of the volcano on the communities nearby and the fields that were their livelihoods, why are we still unsure of the cause?

Mud volcanoes are extremely common on Earth, with thousands of examples known worldwide. They come in many shapes and sizes and behave a little like their molten-rock counterparts, going through long periods of inactivity with periodic violent eruptions. Mud volcanoes, however, spew out not molten hot lava from the Earth’s mantle, but usually a cold mixture of gas, water and solids.

Some of the most spectacular examples of mud volcanoes are in Azerbaijan where they can range from a few meters across to the size of a small mountain. They are commonly found at tectonic plate boundaries, and also underwater at river deltas where sediment is buried rapidly, causing unusually high pressures to build up underground. The muddy mix is also pushed to the surface by the buoyant gas it contains. Usually mud volcanoes grow slowly, through layer upon layer of mud. What happened in Sidoarjo in 2006 is unique, with Lusi by far the fastest growing mud volcano we know of, having drowned surrounding houses, factories, places of worship and schools in a foul-smelling, emulsion-like mud. 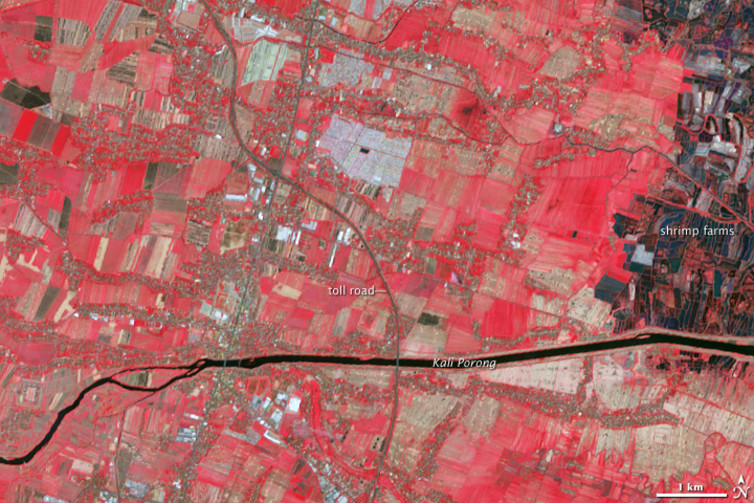 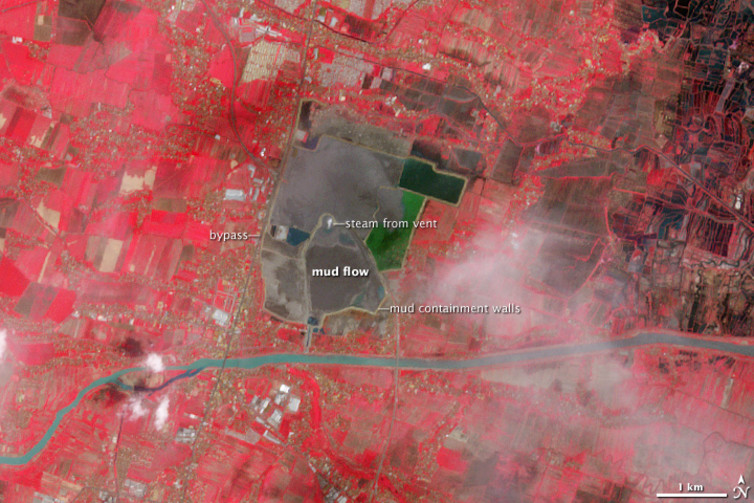 The journal Marine and Petroleum Geology is publishing a special issue that examines the ways this amazing phenomena is developing. It includes one paper by geoscientists Stephen Miller and Adriano Mazzini (“[More than ten years of Lusi: A review of facts, coincidences, and past and future studies”) that exhumes the debate of what caused the eruption, offering strong support for the earthquake as the trigger and dismissing the idea the borehole was responsible.

The explanation implicating the drilling is that water from surrounding bedrock entered the 2,834 meter-deep Banjar Panji 1 well, which for its lowest 1,743 metres was unprotected by steel and cement casing. The pressure the water exerted was enough to fracture surrounding rock or pre-existing faults. Mixing with underground mud from the Kalibeng Formation, which makes up part of Java’s geology, this pressurized water and mud rushed to the surface through a fault, forming the Lusi mud volcano just 200 meters from the drilling site.

The alternative explanation is that despite its proximity the drilling well was coincidental, and that the 6.3 magnitude Yogyakarta earthquake on May 27, 260km away had sent vibrations into the Kalibeng Formation’s mud layer, causing it to liquefy and rise to the surface under pressure.

That earthquakes can trigger eruptions has been documented as far back as Pliny’s Encyclopedia in the first century. It’s also the case that the eruption started as a series of small eruptions, all aligned along a geological fault, so the role of the earthquake certainly deserves full consideration. But in comparison with other eruptions triggered by earthquakes such as in Azerbaijan, Pakistan and California, the Yogyakarta earthquake was very far away given its size. More compelling still is that there have been bigger and closer earthquakes that have not triggered eruptions, while other earthquakes have caused greater shaking and vibrations right at the site of Lusi, yet nothing happened on those occasions. If the earthquake caused liquefaction we would expect to see the widespread release of gas from the liquefied layer – but a study by Mark Tingay and colleagues in 2015 showed this did not happen. 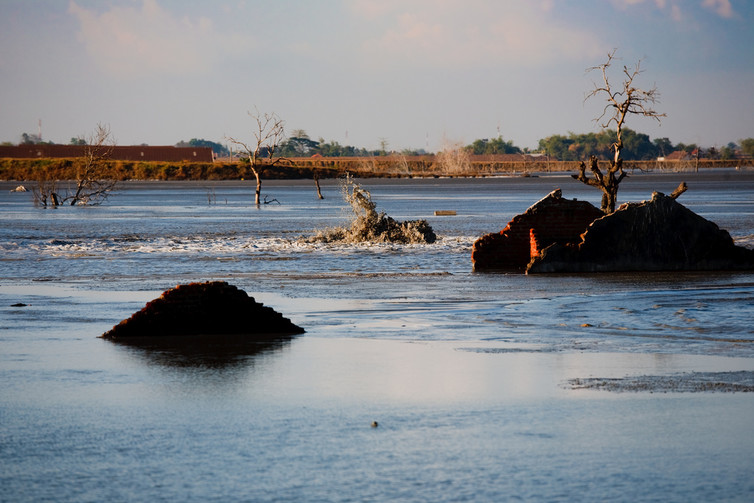 A town, under layers of mud. (Credit: kazeeee)

The well was drilled by the Indonesian company PT Lapindo Brantas, which blamed the earthquake. Information on the borehole was passed to us at the time, which showed there was an influx of water that we estimated was sufficient to cause the rocks around the uncased borehole to crack. So the new paper by Miller and Mazzini doesn’t bring any new information or reasoning to the debate, which will now probably remained mired unless new data from the borehole or from the critical period at the end of May 2006 comes to light, and this is unlikely.

Distinguishing between two hypotheses for a unique event can be a challenge. We cannot go back in time and collect the ideal set of data and samples to test the hypotheses, nor can we make direct comparisons with other similar phenomena for which we know the cause. There are other major disasters that we still cannot be certain had a man-made cause, such as earthquakes potentially triggered by filling dams with water.

In the case of Lusi, we very strongly favour the argument that the drilling was responsible, but neither of us were at the site of the incident almost two kilometers underground at the time to witness it, and more than ten years on it’s clear the data and reasoning behind our argument have yet to convince everyone.