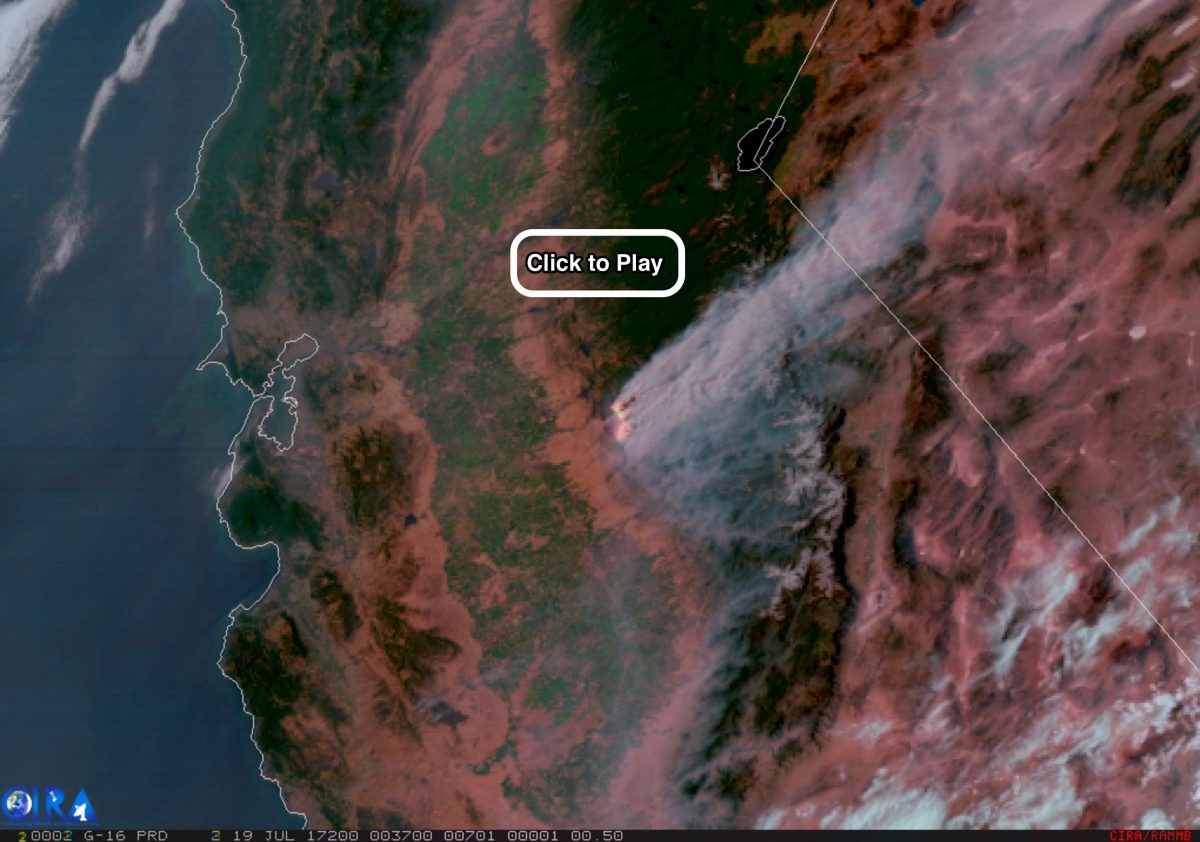 With its vastly improved capabilities, the new satellite has the potential to save the lives of firefighters

Heat and the massive smoke plume from California’s Detwiler Fire are seen in this animation of visible and infrared imagery from the GOES-16 satellite acquired on July 18, 2017. (Source: RAMMB/CIRA)

For decades, satellites have been helping fire managers identify and monitor blazes, based on their smoke plumes and the hot spots they create in infrared imagery.

But as the animation above shows in spectacular fashion, the new GOES-16 weather satellite has taken things to a new level. With higher resolution imagery, and nearly real-time imaging capabilities, it is already helping forecasters improve their ability to predict wildfire behavior — which of course has the potential to save lives.

The animation shows California’s Detwiler Fire not far from Yosemite National Park on Wednesday, July 18th. It begins at 1 p.m. California time and runs through dusk. By that evening, the fire had grown to 45,000 acres, up from 20,000 the day before. And as I’m writing this on Friday morning, the fire has grown to 70,000 acres — about the size of Tampa, Florida. Fifty-eight homes have been destroyed, and with the fire just 15 percent contained, 1,500 structures remain threatened.

In the animation, the massive smoke plume is clearly visible. So is something that looks like flames. It’s not exactly that — you’re not seeing actual visual imagery of flames. Instead, you’re seeing heat emanating from the flames, detected by the sensor aboard GOES-16 in infrared wavelengths.

Overall, the animation consists of data acquired in a number of wavelengths of electromagnetic radiation — ranging from the visible light that we see with our own eyes to different wavelengths of invisible infrared light. The result is a view that clearly reveals not just the Detwiler Fire’s smoke plume but also details about topography and vegetation on the ground, and information about the relative intensity of flames within burning areas. And all of this during the day and night.

To view active burning areas, the Advanced Baseline Imager on GOES-16 uses three spectral bands in the shortwave and near-infrared part of the electromagnetic spectrum. The red, yellow, and white colors seen in these active burn zones are indicative of the fire’s intensity, with white showing where it is hottest.

This wealth of data is also presented in greater spatial resolution than with the current generation of operational weather satellites. This includes the spacecraft GOES-16 will replace in November as the GOES-East satellite once it becomes officially operational. For example, in visible light, GOES-16 can see things as small as half a kilometer across, compared to 1 kilometer for the current generation of GOES satellites. That finer resolution almost gives GOES-16 the ability to spot the very largest container ships sailing the high seas. Almost, but not quite.

Plus, GOES-16 can scan an area as frequently as once every 30 seconds, providing nearly real-time views of a fire, as well as developing weather systems.

That rapid scanning is what provides the sense that we’re watching an actual movie of the Detwiler blaze — actual flames blossoming and spreading out while the smoke plume billows toward the northeast.

The bottom line, according to the National Oceanic and Atmospheric Administration, which manages the satellite:

More frequent time-steps and greater spatial resolution help produce a far clearer picture of a wildfire’s movement, providing nuanced details that are just not visible in animations from previous satellites. This allows forecasters and fire managers to anticipate, not just react to, how a wildfire’s behavior might shift with the approach of a weather system. They can also see changes in a fire’s spread and intensity in time to give a warning to firefighters, even at night — before they might find themselves trapped or overrun by flames.

Returning to the Detwiler Fire itself, the timelapse above offers a spectacular view from the ground as day turned to dusk on July 18th.

And here are some additional views, from Twitter as well:

San Rafael and Marin FF’s continue to assist battling the dangerous #DetwilerFire making progress and helping to save lives and property. pic.twitter.com/vODdywt4TD