What Can fMRI Tell Us About Mental Illness? 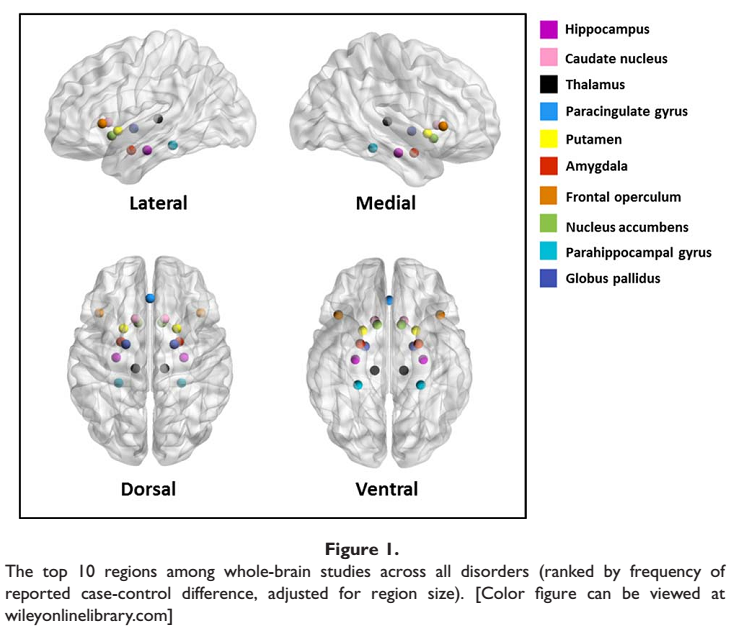 Icahn School of Medicine researchers Emma Sprooten and colleagues carried out an ambitious task: to pull together the results of every fMRI study which has compared task-related brain activation in people with a mental illness and healthy controls.

The results were rather surprising. It turned out that there were very few differences between the different disorders in terms of the distribution of the group differences across the brain:

Overall, there was no significant effect of diagnosis on the spatial distribution of the reported case-control differences (χ2=232, P=0.27)… for each pair of diagnoses, correlation coefficients across regions ranged between 0.42 and 0.82 and were highly significant (all P<0.001).

In other words, there was little or no diagnostic specificity in the fMRI results. Differences between patients and controls were seen in the same brain regions, regardless of the patients’ diagnosis. While blobs were found in almost every brain region by at least one study, here’s where the differences were most common:

It’s notable that almost all of these top-10 regions fall within the “limbic system” of the brain, i.e. areas which are traditionally thought to be involved in emotion. By contrast, the rest of the cerebral cortex is hardly represented at all.

So mentally ill people have abnormal limbic system responses to various tasks, irrespective of diagnosis. While it’s hardly surprising that an emotional disorder such as anxiety would be linked to limbic dysfunction, it is remarkable that schizophrenia, an entirely different and ostensibly “non-emotional” syndrome, has the same pattern of results.

However, if we look at the data more closely, we can see that there are some differences between the disorders. The differences are not statistically significant, but this might reflect a lack of statistical power: 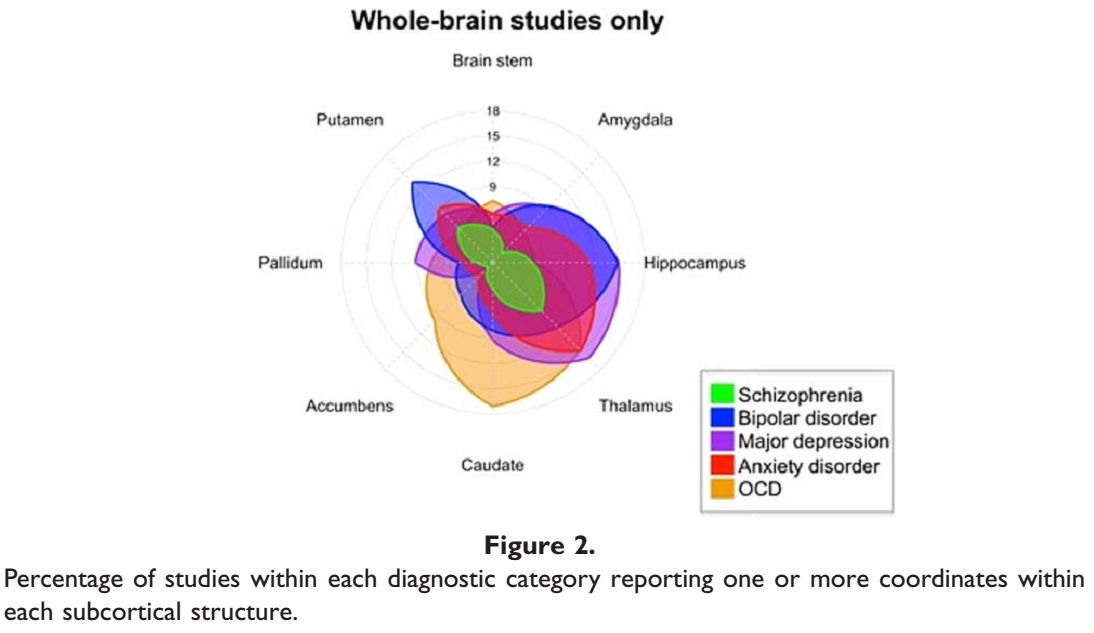 Schizophrenia (green) was associated with the fewest limbic blobs, so perhaps it is not all that similar to the other disorders.

The abnormalities in brain networks and network-regions we can observe with fMRI reflect disorder-general conditions that facilitate the emergence and persistence of symptoms but are insufficient for explaining symptomatic variability across disorders.

This is a pretty radical conclusion because it is implies that most fMRI studies of, say, depression, have not told us anything specific about depression. Instead, the group differences seen in these studies have been reflections of some general ‘transdiagnostic’ trait which is common to depression, anxiety, bipolar disorder etc.

What could this trait be? Sprooten et al. suggest that “the disorders examined here arise from largely overlapping neural network dysfunction”, in other words that the transdiagnostic trait is a neurobiological part of the cause of the various different disorders. But it seems to me that there’s no reason to assume this.

What if the common factor is more straightforward: something like anxiety or stress during the MRI scan?

It’s plausible that patients with mental illness would be more anxious, on average, than healthy controls, especially during an MRI scan which can be a claustrophobic, noisy and stressful experience. This anxiety could well manifest as an altered pattern of task-related brain activity, but this wouldn’t mean that anxiety or anxiety-related neural activity was the cause of any of the disorders. Even increased head movement in the patients could be driving some of these results, although I doubt it can account for all of them.