La Niña typically cools the Pacific. But this time, large swathes of warmer-than-average sea temperatures have muted the cooling.

A comparison of sea surface temperature anomalies in the Pacific Ocean for two seven-day periods: Dec. 28, 1998 to Jan. 3, 1999; and Dec. 26, 2016 to Jan. 1, 2017. The strong La Niña of 1998/1999 is characterized by widespread blue colors concentrated especially along the equator west of South America. Whereas today’s Pacific is far warmer, with a wimpy La Niña characterized by only mildly cool temperatures along the equator. (Images: NOAA. Animation: Tom Yulsman)

The surface waters of the Pacific Ocean have been considerably warmer than average lately — with one exception: a small spear of coolness along the equator that’s characteristic of La Niña.

Apparently, all that warmth has prevented the current La Niña — a cool phase in the Pacific that influences weather worldwide — from gaining much strength. In fact, as La Niña’s go, this one has indeed been wimpy ever since it got going in late summer last year.

And now it is almost certainly on the way out, according to the latest analysis by NOAA’s Climate Prediction Center.

The forecast is for La Niña to fully dissipate by February, and for neutral conditions — neither La Niña nor its warm opposite, El Niño — to remain in place through the first half of the year. (There are some hints that after that a new El Niño could blossom, but it is way too soon to say.)

Our current wimpy and fading La Niña has been starkly different from a much stronger one that occurred in 1998 and 1999. You can see just how different they’ve been by watching the animation above. It depicts how sea surface temperatures varied from average in late December and early January during both episodes.

The 1998/1999 event followed a monster El Niño — just as our current La Niña did. As 1998 gave way to 1999, sea surface temperatures through much of the Pacific were much cooler than average, as indicated by the large swaths of blue color. And the chill was particularly concentrated along the equator west of South America, a characteristic that helps define La Niña. (The opposite happens during an El Niño — warmth along the equator in the eastern and central Pacific.)

Zoom forward in time to the seven-day period between Dec. 28, 2016 and Jan. 1, 2017. The sea of orange and red colors that has spread across much of the Pacific is indicative of much warmer than average ocean surface temperatures. And there’s just a wimpy little area of blue along the equator — brought to you by La Niña.

Why such a difference?

“Last year’s Niño was huge in area, duration, and magnitude,” says Bill Patzert, a climatologist at NASA’s Jet Propulsion Laboratory, quoted in an Earth Observatory story. “My take is that because it lasted so long and covered such a large area, it damped the return of strong trade winds needed for a healthy Niña.”

But the La Niña of 1998/1999 was also preceded by a large El Niño. So it’s possible that there is more going on as well.

Another phenomenon known as the Pacific Decadal Oscillation, or PDO, could be playing a role. Like El Niño and La Niña, PDO is characterized by a pattern of sea surface temperatures in the Pacific Ocean. And it has been in a warm, positive phase since 2014.

In the Earth Observatory story, Mike McPhaden of the NOAA Pacific Marine Environmental Laboratory, had these observations about the possible impact of the PDO:

The climate system is very complex, and many processes are at work at any given point in time and space. It could be just the randomness of the climate system that kept this La Niña from taking full flight. Or maybe it is the fact that the Pacific Decadal Oscillation has been in a mostly warm state since 2014, with elevated temperatures in the tropical Pacific making it harder to develop cold anomalies there.”

In the animation I created for the top of this post, I’m struck by just how much warmer the Pacific Ocean is today than it was during the same season in 1998/1999. That got me thinking about the big picture.

El Niño and La Niña — two sides of the El Niño Southern Oscillation, or ENSO — have been occurring against a background of global warming. To be more specific, in recent decades they’ve been happening as the heat content of the world’s oceans has risen, and sea surface temperatures have increased, both due in large measure to humankind’s emissions of greenhouse gases. 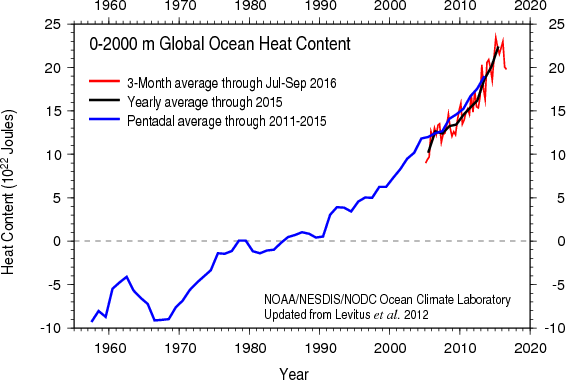 The graph above shows what’s been happening to ocean heat content.

And the following one looks at temperatures at the surface:

This plot shows how sea surface temperatures have changed in three realms: the global tropics (red); the NINO3.4 region, the area of the Pacific used to diagnose El Niño and La Niña (gray); and the eastern tropical Pacific (blue). Each time series shows a three month running average of sea surface temperature anomalies calculated with respect to a base period of 1981-2010. (Source: Columbia University International Research Institute for Climate and Society.)

As the gray line in the graphic above shows, sea surface temperatures in the NINO3.4 region — where changes in SSTs are used to diagnose El Niño and La Niña — have varied quite a lot. The large warm excursions here are generally associated with El Niño, whereas cool ones are linked to La Niña. At the same time, it is difficult to discern any clear trend.

But also check out what’s been happening to sea surface temperatures in the global tropics overall, as well as the eastern tropical Pacific Ocean in particular (red and blue lines respectively). The trend since 1950 is clearly toward warmer temperatures, albeit with a lot of natural variation thrown in.

I should be clear that I’m not trying to make an argument that the current La Niña has been wimpy because ocean temperatures have gone up over the long run. The impact of climate change on the two sides of ENSO is an area of intense research.

Firm answers have been elusive because scientists have not been observing ENSO comprehensively for a long enough period. Moreover, El Niño and La Niña involve incredibly complex interactions between the atmosphere and oceans. And computer models are not quite up to the challenge yet of fully simulating this interplay.

But it is difficult to imagine, at least for me, that all the energy accumulating in the Earth’s climatic system will not eventually have a clearly discernible and significant impact on ENSO phenomena.

During the height of last year’s El Niño, Michael Jarraud, former secretary-general of the World Meteorological Organization, commented on this idea in a story at Columbia University’s State of the Planet blog. He noted that El Niño could be:

. . . playing out in uncharted territory . . . This naturally occurring El Niño event and human induced climate change may interact and modify each other in ways we have never before experienced.

Or to play off a famous saying by Wallace Broecker, a renown scientist at The Earth Institute of Columbia University: We’ve definitely been poking at the beast, and he’s clearly no longer asleep. Is that him just yawning? Or could it be the beginning of a growl?…