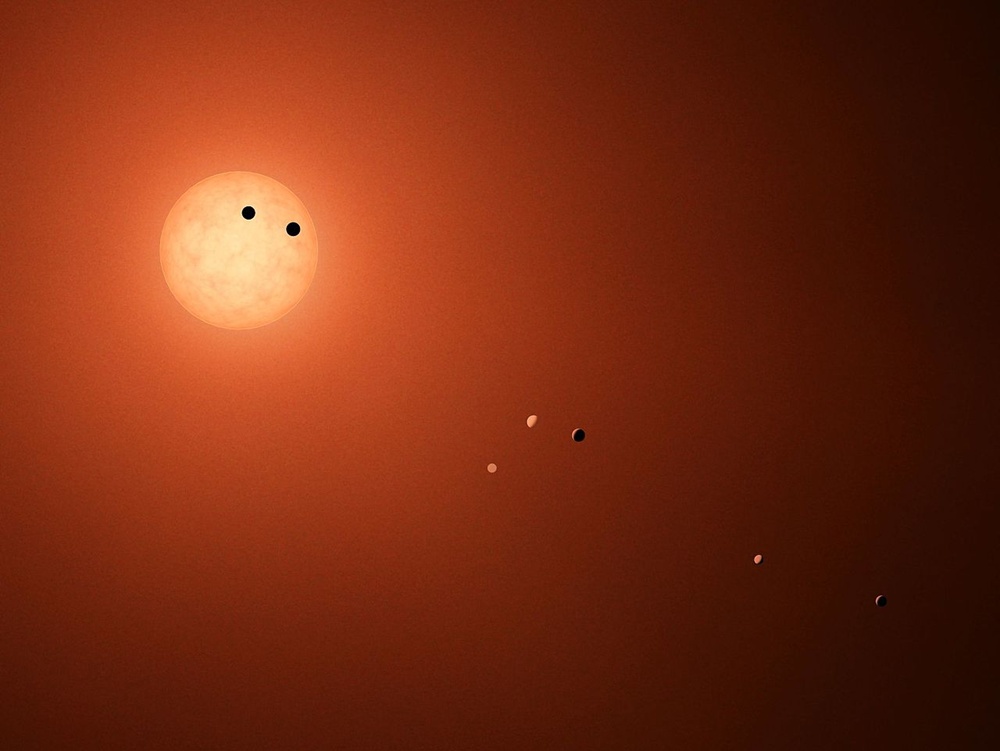 TRAPPIST-1 opens up an exciting field for astronomers: a small, nearby, compact planetary system with seven Mars- to Earth-size worlds orbiting in days or weeks instead of months and years. What’s more, because their star is small and cool, all the planets may be habitable.

Maybe. Two new papers are out on TRAPPIST-1. One makes the chances for life even more ripe, while the other virtually strips away all chances of habitability.

Let’s step back: until the last decade or so, most red dwarf or M-dwarf stars were thought to be active flaring stars, which would strip away planetary atmospheres under most accepted scenarios. But as more planets turned up in areas where planets would retain water aroudn M-dwarfs, scientists began to rethink their definition of habitability and come up with scenarios under which atmospheres and liquid water, including planets with strong magnetic fields, which is the reason we have a thick atmosphere but Mars doesn’t.

So the habitability of the TRAPPIST-1 planets would rely on a relatively calm star. That’s one of the reasons that while Proxima Centauri b is considered a gamble for true habitability, as Proxima Centauri is a very active flaring star that might endanger any planets in its violent path. And research from Hungarian planetary scientists says that TRAPPIST-1 may be swarming with flares, possibly endangering most, if not all, of the planetary atmospheres that might arise.

The researchers base their conclusion on data from the Kepler space telescope. One flare even topped the most powerful burst ever known from our Sun, known as the Carrington Event. In 1859, that flare fried telegraph infrastructure and caused aurorae events all the way down to tropical latitudes in the northern hemisphere.

That flare reached out the 93 million miles (150 million km) between the Earth and Sun. The farthest TRAPPIST-1 planet, -1h, is 5.8 million miles (9.4 million km) from TRAPPIST-1. The researchers conclude that such activity would destabilize the atmospheres of the planets. Their findings have been submitted to the Astrophysical Journal for review.

Let’s say that maybe we’re seeing outlier events or there’s some flaw in the Hungarian data. If that’s the case and TRAPPIST-1 planets can host life, University of Chicago researchers say that the planets may instead basically share life via little planetary sneezes between the worlds.

The idea of exchanges of rocks or other objects between worlds is nothing new. Several meteorites from Mars have been found on Earth, including that mysterious Mars rock that may hold ancient martian bacteria. It means that if there were life on Mars, it might not be vastly different than that of Earth.

At closest approach, or opposition, Earth and Mars are about 34 million miles (55 million km) apart. That’s quite a distance for a rock to travel, yet it clearly happens.

Now imagine this: the TRAPPIST planets are about an Earth-Moon distance apart at opposition. The Earth-Moon distance is 238,000 miles (383,000) km at perigee. There are seven worlds to work with, three in an especially temperate area of the habitable zone. Transport between those seven worlds could essentially result in shared biology across three or seven worlds, all with simple transport of materials taking place in relatively short spans of time. The researchers estimate some rocks could transport between worlds in 10 to 80 years.

What’s more, any impact that kicks up rocks would transport 45-60 percent of materials beyond its world’s reach, rather than falling back down. 20-40 percent of that material may fall onto other planets in the narrower habitable zone of three planets.

Their research has been accepted into the Astrophysical Journal Letters, and a preprint is available here — though as a caveat, some numbers may change after the paper has been fully refereed.

But either article opens up some lines of study for TRAPPIST. So take your pick … peril or panspermia paradise?