The Touching Story of a Dinosaur Face 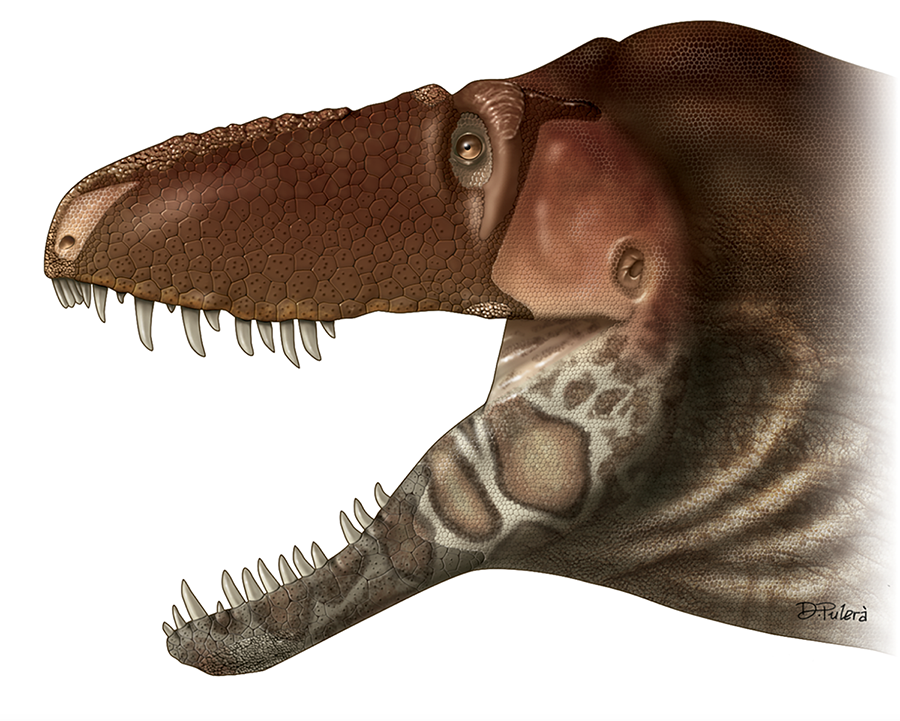 A reconstruction of the face of Daspletosaurus horneri, based on bone textures, reveals a host of details. (Illustration courtesy of Dino Pulerà)

The eyes may be the window to the soul, but for paleontologists, reconstructing a dinosaur face opens doors into how it may have perceived and interacted with its environment — as well as some features it shared with distant evolutionary kin.

Researchers report being able to put a face to the name of 75-million-year-old Daspletosaurus horneri, a newly described member of one of Dinosauria’s most famous lineages, and discover the animal was the touchy-feely sort.

Bones preserve a lot more than just the internal scaffolding of an animal. Certain textures, from tiny holes to striations to knobby bits can be clues to how and where muscles attached (and what size the muscles were), whether an animal had ornamentation and even the texture of its skin.

Case in point: D. horneri, a tyrannosaurid from the Late Cretaceous of Montana, described for the first time today in Scientific Reports. And yes, fellow dino-geeks, the species name is a nod to the mighty Jack Horner, one of the world’s most influential paleontologists and no stranger to Montana digs.

D. horneri, known from the complete skull and bits of a front and hind limb of one adult plus fragments of at least two other individuals, was about 30 feet long and more than 7 feet tall. Like its distant cousin T. rex, D. horneri was a bipedal carnivore with front limbs really only useful for playing the ukelele.

But perhaps the most interesting thing about the new tyranno is its mug. Bones of the dinosaur face were preserved well enough to identify different textures associated with different surface and subcutaneous features. 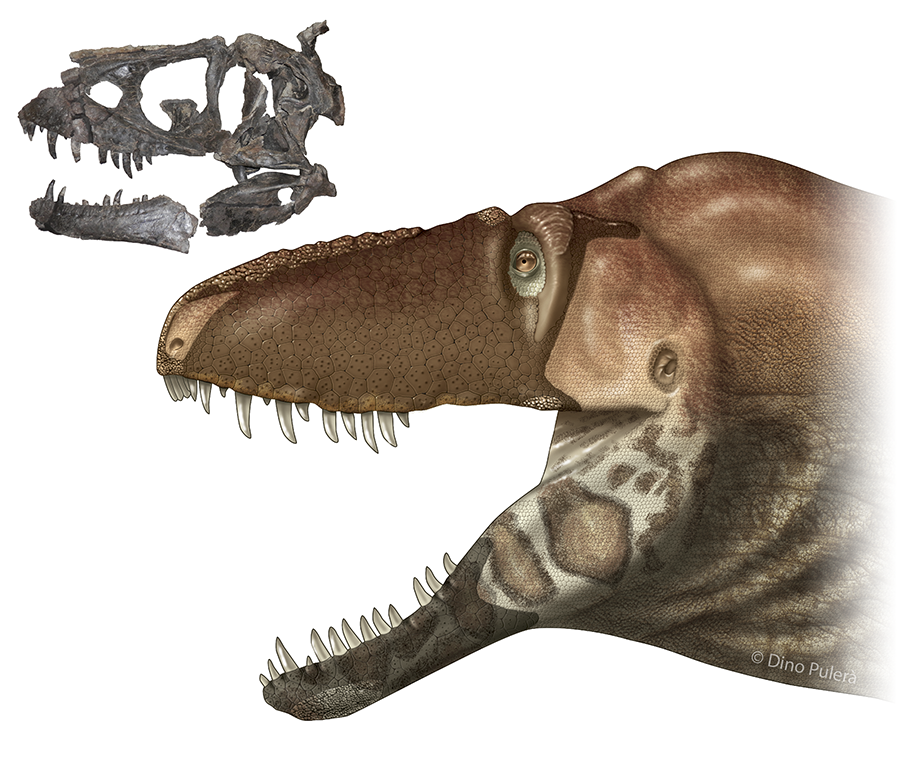 Another look at D. horneri‘s reconstructed face with its holotype skull in background for comparison. (Illustration courtesy of Dino Pulerà)

Most intriguing, D. horneri‘s facial bones have a high density of holes called foramina, which blood vessels and nerves pass through, and these helpful holes occur in a pattern very similar to that of crocodilians, which, like dinosaurs, belong to the group Archosauria.

Foramina in modern crocs facilitates Integumentary Sensory Organs (ISOs). The ISO system sends information about every bump and brush felt by flat scales on the crocodilian’s face to the animal’s brain, allowing a high degree of tactile sensitivity. How high a degree? According to the authors of today’s paper, crocodile snouts are “more sensitive than human fingertips.”

It’s reasonable to believe, given the similarities in foramina number and location, that D. horneri and other tyrannosaurids had ISOs as well, which would have provided useful information about the immediate environment. The touchy-feely nature of their faces would have helped with everything from handling prey to scouting out a good nest site.

Another intriguing dinosaur face find courtesy of D. horneri was a feature not found in crocodilians but present in birds: a groove in the dentary, or front of the lower jaw. In birds, the groove is deeply inset and well-defined, but in tyrannosaurids it’s more shallow. The groove is full of foramina in both tyrannosaurids and birds, and researchers believe that its presence in the dinosaurs suggests that it was an important prerequisite for evolving the vascularization needed to have a beak.

After all, while not directly ancestral to birds, tyrannosaurids belong to the major dino-gang Theropoda, which also includes the lineage that did evolve into Tweetie and the like. 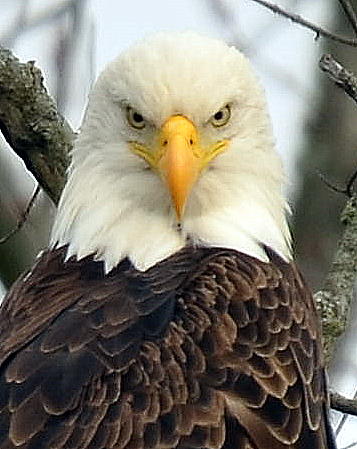 Descended from dinosaurs. Not from tyrannosaurids, though. (Credit Wikimedia Commons/Cheepshot)

The researchers reconstructed D. horneri‘s distinctive face by comparing its fossilized bone textures with that of alligators and several species of birds.

The new paper also makes the case for D. horneri being an example of anagenesis, when enough changes accumulate over time to turn one species into another in a linear way, as opposed to cladogenesis, in which one ancestor species radiates into multiple other species.

D. horneri seems to be, in fact, one of the more intriguing new species popping up in the literature over the past few months. But sorry, pro-fluff friends, no evidence of feathers on this dinosaur face. 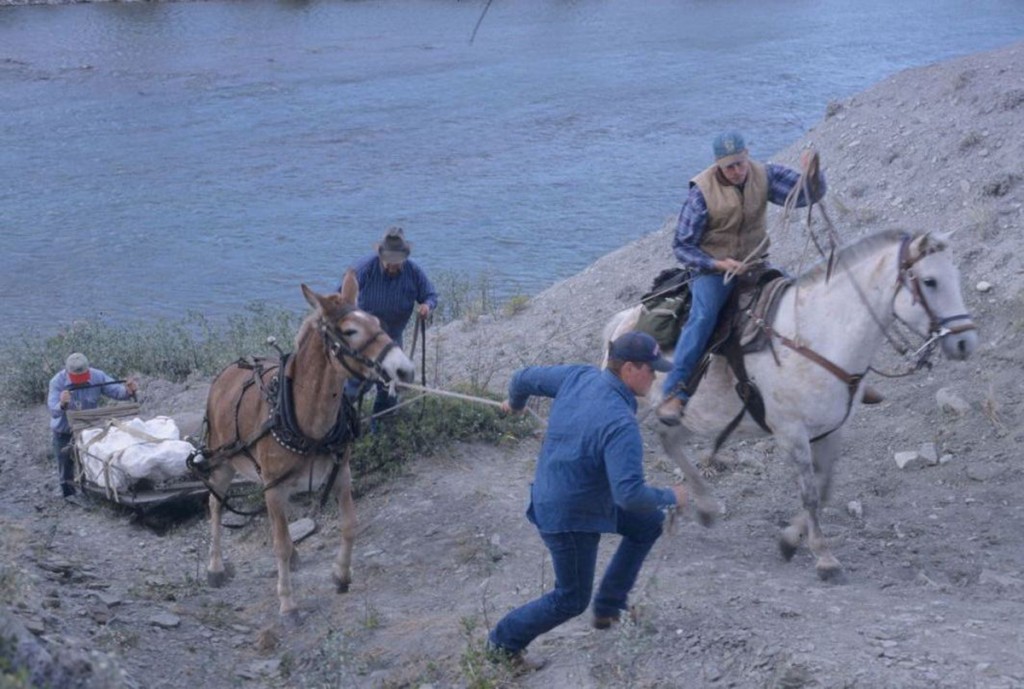 After more than 66 million years in the ground, D. horneri gets to go sledding… or at least gets hauled to a new home in protective jacketing. (Credit David Varricchio)