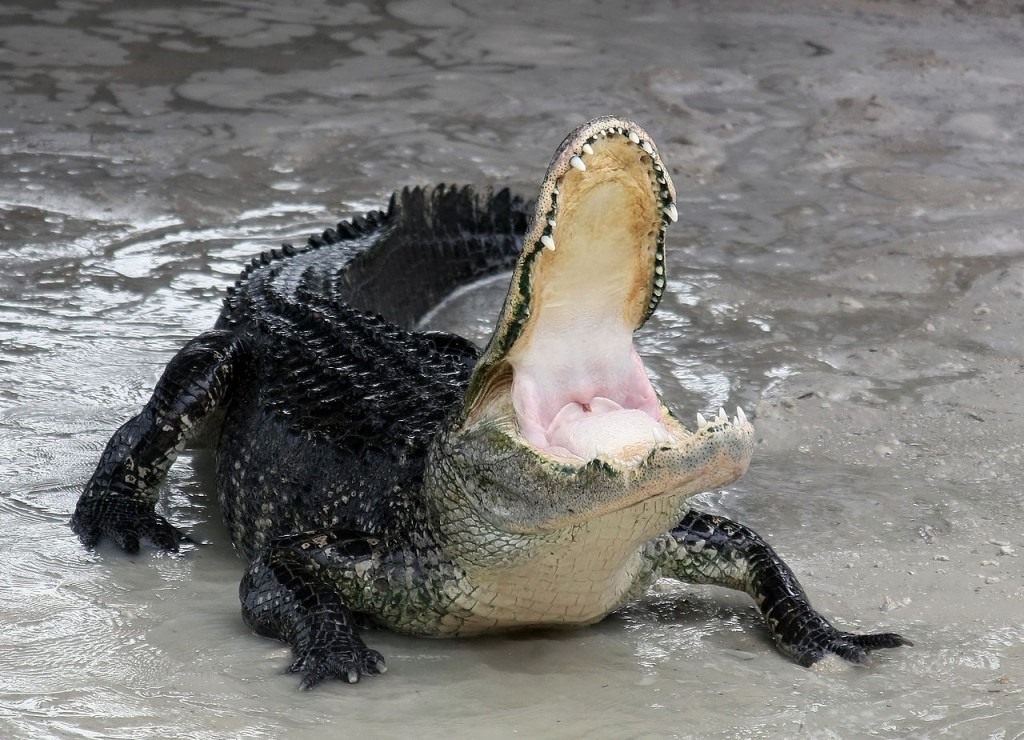 Does this American alligator seem relaxed or riled up to you? A new study suggests humans can tell, by soundbite alone, an animal’s state of emotional arousal across all terrestrial vertebrate species. (Credit US Fish & Wildlife Service)

Chilled out or worked up? Most of us can pick up pretty quickly on another human’s state of emotional arousal. But Charles Darwin hypothesized that understanding emotional expression across species went way, way back, all the way to the earliest terrestrial vertebrates (that’s 350 million years, give or take), and that it was crucial for survival.

After all, it’s kinda helpful to know if those monkeys in the trees are just yammering on about nothing or freaking out about the lion they see sneaking up on you.

Today, in an intriguing study, researchers have the first evidence that Darwin was right. The new study hints that all terrestrial vertebrates — you, this alligator, every dead dinosaur, birds and yeah, those monkeys in the trees and the sneaky lion, too — evolved a universal signaling system, a form of communication that we still retain, and might even put to good use.

Read the words emotional arousal and you might think of a Harlequin novel, or Antonio Banderas, or whatever. And hey, I don’t judge. But that’s not what we’re talking about here.

As cognitive scientist Piera Filippi, the lead author of today’s paper explains it, the term simply means “the level of responsiveness to external stimulation,” whether that external stimulation is a lion sneaking up on you or Antonio Banderas in a tuxedo.

About a century and a half ago, in The Descent of Man, Darwin suggested that the vocalizations associated with high and low states of emotional arousal went all the way back to the first vertebrates to shuffle ashore. Those would be the tetrapods, or terrestrial vertebrates, which eventually evolved into a wide array of animals including frogs, whales, pigs, dinosaurs, birds, monkeys, lions and us (among others).

Darwin hypothesized that, when in a state of excitement, the muscles around the early tetrapod’s windpipe contracted and it produced “purposeless sounds.” Over time, these purposeless sounds may have, well, achieved a purpose, and served as a signal to other tetrapods milling around within earshot (“Hey! There is a bigger, bitey tetrapod coming this way!”).

Tetrapods that adapted to understand the signal may have had a better chance of responding appropriately to the situation (Run! Or at least lurch away quickly since you haven’t evolved the ability to run yet!) and, thus, a better chance of surviving.

As tetrapods diversified into the aforementioned assortment of beasties, changing in size and shape and ecological niche, they still retained that early signaling system, Darwin reasoned. So despite the evolutionary distance between, say, a human and an alligator, we should be able, without any training, to discern whether that alligator is in a high or low state of emotional arousal.

That Darwin. Such a smartie. Because today’s study is the first to test his hypothesis across a broad spectrum of Tetrapoda and discover that yep, seems like he was onto something.

Do You Hear What I Hear?

Filippi says she was looking for research testing Darwin’s hypothesis when she discovered it had never been done, at least not across Tetrapoda.

Much narrower studies had determined that humans could perceive states of emotional arousal in some other mammals, such as chimpanzees, pigs, dogs and cats, solely through vocalizations.

And that makes sense: After all, chimps are our nearest living relatives, and pigs, dogs and cats are domesticated animals that have lived in close quarters with our species for millennia.

Other research has shown that dogs can perceive human emotional arousal through vocalizations (no surprise to any dog owner who has ever asked “Did you eat my new shoes? DID YOU?!”).

Without any existing research to answer her question, Filippi decided to satisfy her curiosity by testing the full scope of Darwin’s intriguing hypothesis herself.

“Designing the study was actually a fun process. It had to be simple and give us clear data to analyze,” says Filippi.

Today’s study used sound clips of high and low emotional arousal vocalizations from nine species spanning the range of Tetrapoda and about 350 million years of evolution. Line at bottom shows the time of divergence between the species in millions of years. (Credit Filippi et al 2017, DOI: 10.1098/rspb.2017.0990)

For the human sample, the individual was a native Tamil speaker; when selecting study participants to listen to the samples, Filippi’s team made sure none of them had knowledge of the South Asian language.

About those study participants: There were 75 of them and they were native speakers of either English, German or Mandarin. If the results were consistent across languages, hypothesized Filippi, it would suggest the human ability to recognize emotional arousal in other animals has the deep biological roots Darwin hypothesized.

Participants listened to multiple, randomized samples from the nine species and indicated whether they perceived the animal’s state as high or low arousal.

If I Could Talk To The Animals

The study participants were able to correctly identify an animal’s state of arousal across the board. Species-specifically, the participants were right 95 percent of the time for the human vocalizations, which is no big surprise.

But they also nailed it 90 percent of the time for the hourglass treefrog, which is about as distant a relative as we have on the tetrapod family tree.

Other top scores for accuracy included the giant panda (94 percent) and the African bush elephant (88 percent). Even the human ability to tell a chill gator from one all amped up was impressive: 87 percent. 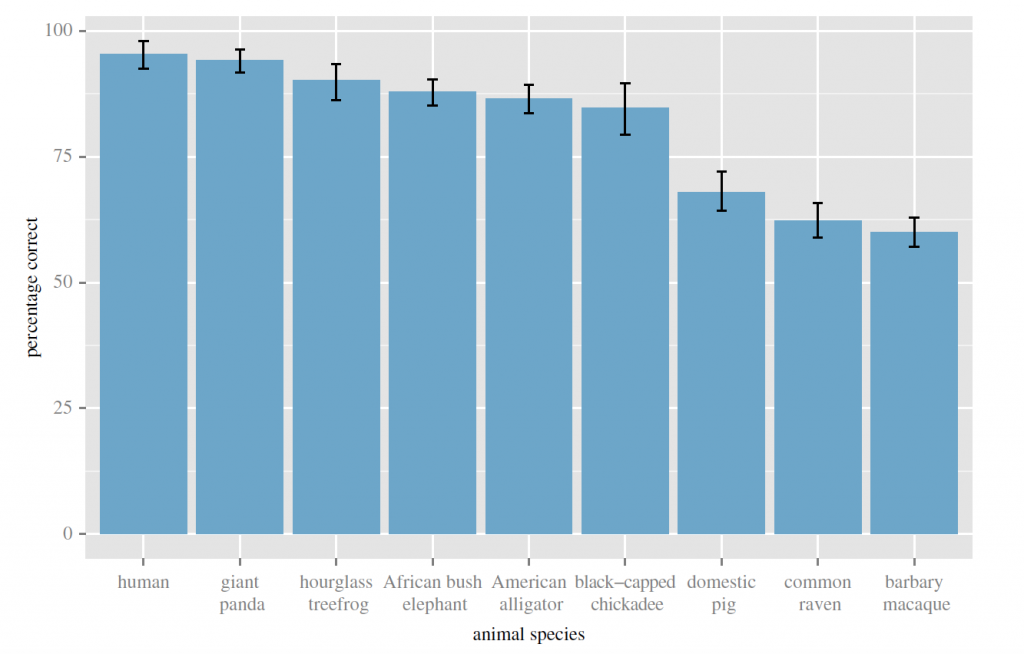 Perhaps surprisingly, the study participants scored the worst on determining whether vocalizations by the Barbary macaque — the species closest to humans among the non-humans in the study — indicated high or low arousal. But even then, the accuracy (60 percent) was well above chance (50 percent).

Filippi sees the lower accuracy for macaque vocalizations, and higher scores for more distant relatives like the frog and gator, as bolstering Darwin’s belief that we are talking about a universal signaling system that goes back 350 million years. If, for example, this form of communication had only evolved among primates, you’d see the macaque scores much higher.

Get Your Freq On

The researchers analyzed the samples using four parameters to determine just what it was about the vocalizations that might be signaling the animal’s state of arousal: fundamental frequency (tone of voice), harmonics-to-noise ratio (HNR; think of it as harshness), duration and spectral center of gravity (SCG).

Of the four, SCG is the most technical. It’s related to frequency and is basically, as Filippi puts it, “the weighted mean of frequencies in a sample, or the value which balances out all frequencies in the signal.”

Think of how a sound sample looks when charted visually. Some would explain SCG as the center of mass of all those little spikes on a graph.

What Filippi and her colleagues found was that HNR and duration were not good indicators of whether a study participant would accurately perceive the level of arousal in a vocalization. That’s not too surprising, since there’s no continuity across species: some species indicate high arousal with short and harsh vocalizations, for example, others go long and fairly static-free.

Instead, it seemed that fundamental frequency and the related SCG measure were what study participants were listening for, and were the best predictors of participants’ accuracy in determining arousal levels. 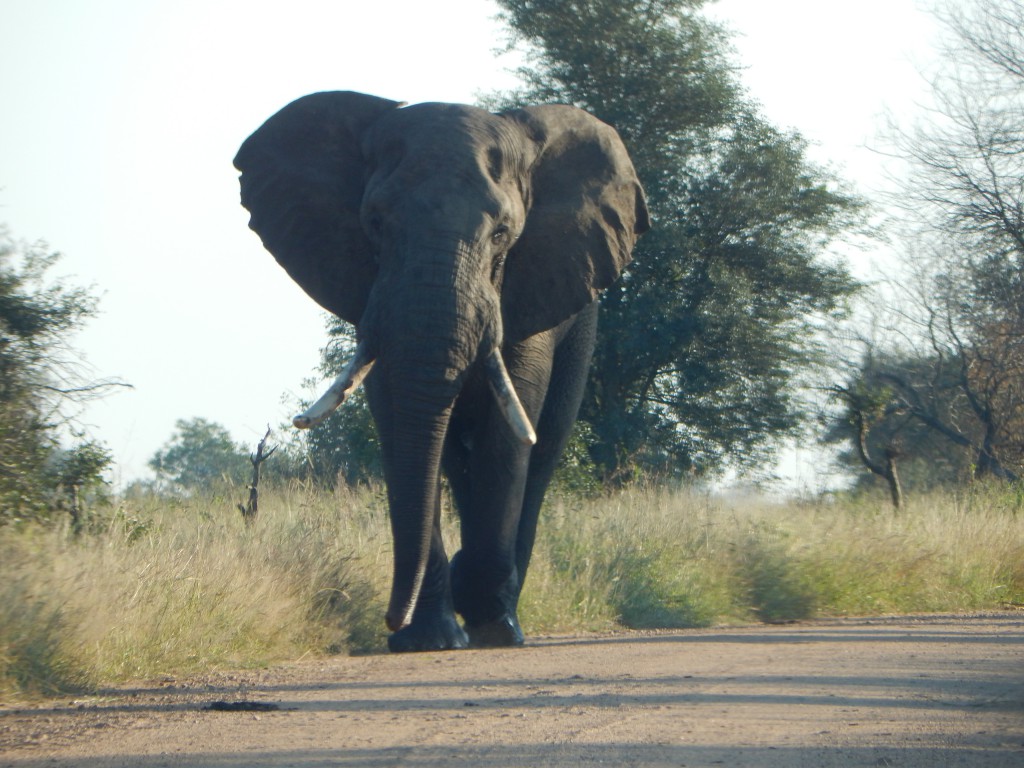 When this impressive fella approached our compact rental car one morning in South Africa’s Kruger National Park, he didn’t make a noise. My friend and I, however, made some early tetrapodian “purposeless sounds” of high emotional arousal. He posed for this photo and walked away. I wonder if he understood we meant no harm but were alarmed by how close he was getting. (Credit G. Tarlach)

Since conducting the study, Filippi has taken the results on the road before a variety of groups.

“I’ve presented this talk a number of times to all different audiences: philosophers, psychologists, computer scientists. And they have all been good at identifying emotional arousal. It’s something we’re good at,” Filippi says. “We are naturally and instinctively able to recognize different levels of emotional intensity.”

In addition to providing empirical evidence that bolsters Darwin’s hypothesis of a universal tetrapod signaling system, Filippi hopes the study results will enhance our understanding of cross-species communication and even improve animal welfare. Next: She wants the results to be replicated and then expanded through the collection of more vocalization samples from more species.

Today’s study appears in Proceedings of the Royal Society B: Biological Sciences. Want to check your emotional arousal i.d skills? Give a listen to several of the samples used in the study. Can you correctly identify the recording of each animal’s aroused state?