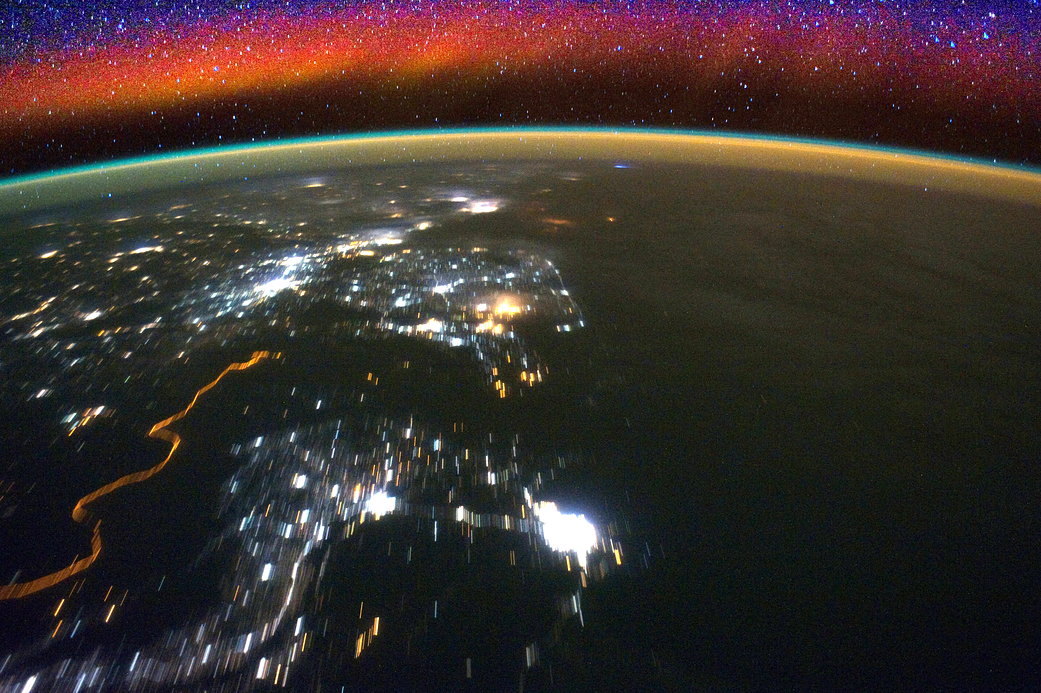 Airglow, as seen from the International Space Station. (Credit: NASA)

On rare occasions throughout history, the darkness of night fails to materialize. Even with the moon darkened, the sky fills with a diffuse glow that seems to filter out of the very air itself. Such “bright nights” have been recorded back to the days of Pliny the Elder around 132 B.C., although explanations for the phenomenon have been lacking.

Using a special interferometer and data from the 1990s, two Canadian researchers say that they can explain why the sky seems so much brighter on some nights. Ultraviolet radiation from the sun interacts with oxygen molecules in the atmosphere on a regular basis, occasionally splitting them into negatively charged oxygen ions. When these ions meet each other again and recombine, the reaction gives off energy in the form of visible light.

This reaction is called airglow, and it’s something that researchers have been measuring for well over a century with specialized instruments. It often appears in pictures from the International Space Station, manifesting as a thin green curve hovering above the surface of Earth. The faint gleam isn’t all that rare —the authors estimate that it’s occurring somewhere around the planet about seven percent of the time — but airglow is normally invisible to us down here on the surface, as it is too faint to see.

But on rare occasions airglow lights up the night sky due to the “stacking” of high-altitude atmospheric waves, which can multiply the intensity by a factor of 10. When the wave frequencies align, their amplitudes increase, and when up to four of them combine at a certain longitude, the night sky comes alive.

In a paper published in Geophysical Research Letters, the researchers estimate that this occurs roughly once a year for any given location, although the presence of a full moon or other light source can wash the glow out. When strong storms roil the atmosphere, it can make the bright nights more likely, a factor that may increase in frequency as weather patterns shift around the world.

For many of us, it won’t really make a difference though — the light pollution that emanates from our urban areas swallows up even the strongest airglow for miles after the city limits.