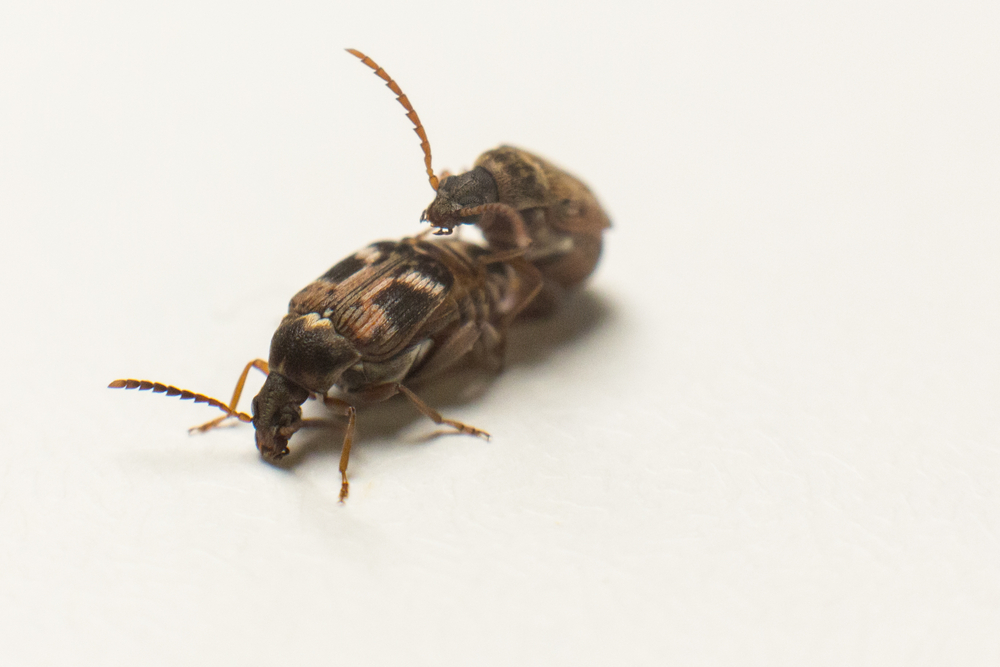 This is going to hurt. (Credit: Shutterstock)

During copulation, the male seed beetle, Callosobruchus maculatus, uses his sharp, spiky penis to damage females’ reproductive tract while depositing sperm. All the while, the female vigorously kicks at her suitor—it hurts! As studies have shown, males with longer, harmful penis spikes enjoy more reproductive success, to the detriment of their partner’s health.

But the process of evolution has a way of balancing the scales. In a new study, Liam Dougherty of the University of Western Australia and colleagues closely monitored isolated populations of seed beetles in their lab, and they’ve concluded that males and females of this species are locked in a violent, multigenerational, “sexual arms race.” Sure, males wield destructive penises, but females, in turn, are adapting with their own defenses. 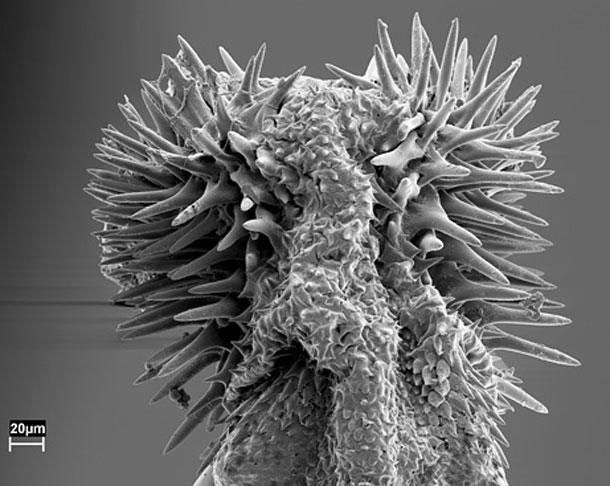 The reproductive strategies of males and females in a particular species don’t always align. Males might develop reproductive behaviors that benefit their health but at the cost of females’, and vice versa. The animal kingdom is rife with examples of this sexual conflict: Certain species of female ducks have vaginas that are twisting labyrinths, so males sport long, corkscrew penises to compensate.

Female fruit flies store sperm in a special pouches, but subsequent male suitors deposit far more sperm than is actually needed in order to flush out their competitor’s inventory. Seed beetles partake in an extreme form of this reproductive tit-for-tat, or what scientists call traumatic mating. It’s actually quite common among invertebrates and other insects.

Dougherty’s team monitored 13 isolated populations of seed beetles, collected from various regions, that have been evolving in the lab for over a decade—well over 100 seed beetle generations. Then, they took a close look at their baby-making habits, measuring things like the volume of female reproductive tracts (using micro-CT scanners), penis spine length and damage inflicted by the spines, as well as changes to females’ immune systems.

Within their seed beetle populations, scientists noted a strong correlation between the length of penis spines and the volume of tissue in female reproductive tracts—the larger the spikes, the more voluminous the reproductive tract. While their work only shows a correlation between two traits, it makes sense: As male penises grow more threatening over time, females up their defenses to protect their own fitness.

“It’s probably the harm caused by males that is causing the females to evolve. Because it’s so harmful, you get rapid changes,” Dougherty told New Scientist. “And females that are less harmed have more offspring.”

Why Can’t They Get Along ?

So why are seed beetle penises so brutal in the first place? They may be attempting to deliver a biological message. In addition to the ingredients for life, seminal fluid also contains signaling compounds that alter female physiology. By piercing the reproductive tract, males are perhaps introducing chemicals that cause the female to lay more eggs or discourage mating with other males. Therefore, the longer the spikes, the better the outcome.

Indeed, in 2012 scientists used lasers to shave seed beetle penis spines, and it reduced their reproductive success. They also found that roughly 40 percent of their sperm ends up outside of the reproductive tract—the larger the spines, the greater the leakage, and the more chemicals that are introduced into the female’s body. A male’s longer spines might also harm females enough that they die shortly after laying fertilized eggs, ensuring only his genes are passed down.

But as generations of female seed beetles evolve better defenses, they can mate with more males and produce more offspring—advantage, ladies.

It’s a Cold War-esque arms race, and neither sex will likely emerge victorious. Rather, in the chaotic world of seed beetle sex, males and females are probably co-evolving toward some sort of hellish, sexual equilibrium.