In yet another historic feat, Hayabusa2’s MASCOT rover has completed its mission to explore, probe and photograph the surface of asteroid Ryugu. The rover spent three asteroid-days, or 17 Earth-hours, hopping across the asteroid and conducting research with an array of high-powered instruments. Before its battery life ran out, MASCOT successfully transmitted the first-of-its-kind data to Hayabusa2. Once it’s sent back to Earth, scientists will use the stats to track the asteroid’s journey through space and decode the elements that made up our ancient solar system.

Still to come is another rover scheduled for next summer and Hayabusa2’s long-awaited “punch” into the asteroid to gather up samples for a return to Earth.

On October 3, Hayabusa2 descended from 12 miles (20 kilometers) above Ryugu, the zone where it’s hung out since it arrived in June, to drop MASCOT off about 200 feet (60 meters) above the asteroid. The tiny box-shaped rover, which masures less than a foot in diameter and weighs just 22 pounds (10 kilograms), didn’t have the steadiest landing, though.

Researchers knew that, due to the asteroid’s weak gravitational pull, MASCOT was going to bounce around the surface a bit when it landed, which ultimately left it in an awkward, sideways position. But thanks to a motorized swinging arm and positional sensors that help the rover orientate itself, it managed to quickly gain its footing.

MASCOT, now in an upright position, spent its first 7-hour day on Ryugu studying its landing site. It used its wide-angle camera to photograph the asteroid’s physical characteristics and take measurements of geological features, giving researchers an idea of the environment it formed in and the wear and tear it’s experienced over the years. The rover also used a magnetometer to test the strength of the asteroid’s magnetic field, and recorded its surface temperature with a high-powered radiometer, which will help determine how well Ryugu holds onto heat.

Finally, and arguably most importantly, the rover used its infrared spectrometer to probe the asteroid and determine its composition. Asteroids, unlike planets and moons, are believed to have the same structure and chemical make-up that they did when they first formed in the early days of our solar systems. Some hypothesize that asteroids were responsible for transporting organic molecules, such as water, throughout our ancient neighborhood. By searching for hydrated material in Ryugu’s composition, researchers might find evidence that corroborates this theory. 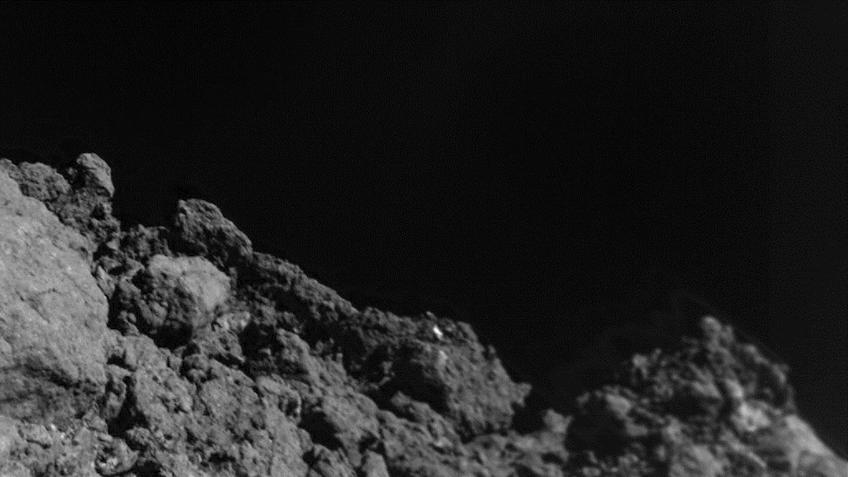 MASCOT snaps an image of Ryugu’s treacherous surface as it floats to the surface. (Credit: MASCOT/DLR/JAXA)

A Hop, Skip and a Jump

Having completing its first round of measurements, MASCOT wasted no time getting to its next destination. Since the asteroid’s terrain is pretty rough, researchers opted to have the lander “hop” to its investigation sites instead of roam on wheels or with crawlers like typical landers do. It used its swinging arm to propel itself upward and leap several meters across the rocky surface — carrying out another round of measurements when it landed. Then, with some unexpected battery life left, scientists used ground controls to launch the rover to one last location, where it completed a third set of investigations in the knick of time.

After 17 hours of hard work, MASCOT finally ran out of juice. But before it did, it managed to transmit all of its data to Hayabusa2, who will pass it along to Earth in the upcoming days.

Hayabusa2 plans to soon join the rovers on Ryugu to carry out a never-before-seen maneuver. As early as the end of October, the mothership will make its first attempt at shooting a projectile into the asteroid and collecting samples to bring back to Earth. It should give researchers unprecedented insights into the pristine surface of an asteroid and may tell us about conditions at the very beginning of our solar system. A third MINERVA-II rover is expected to join the crew next summer to analyze dust particles floating above the comet’s surface, and will carry out science investigations until Hayabusa2 heads back to Earth in 2020.