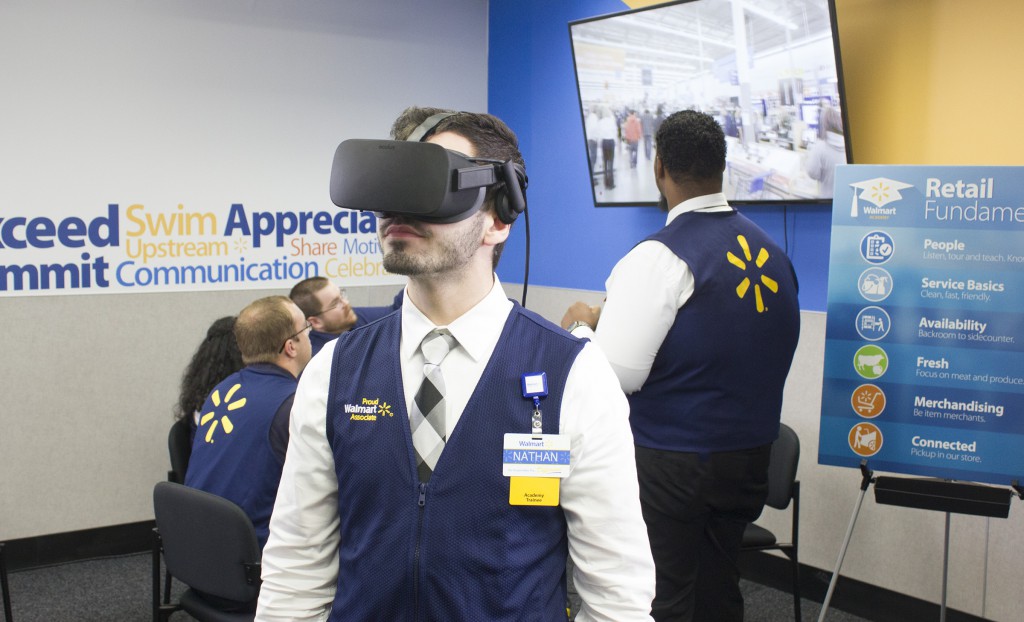 The immersion that comes from wearing virtual reality headsets and running through specific training software can lead to both more efficient and engaging learning experiences that keep people’s attention. Such experiences also offer safer opportunities to prepare people for potentially risky or dangerous situations. That could mean giving NFL quarterbacks repeat opportunities to practice making split-second decisions without running the risk of injury from getting tackled by a 300-pound lineman. Or it could mean enabling Walmart associates to experience the chaos of bargain-hunting crowds swarming into a Wal-Mart Store during a Black Friday sales event. The planned Walmart rollout of such virtual reality training to its training academies is “probably one of the largest if not the largest” deployments of virtual reality training in the history of the technology, says Derek Belch, founder and CEO of STRIVR Labs.

“This is the watershed moment that everybody will be talking about,” Belch says. “We now have the plan in place to put virtual reality in front of an entire company’s training force.”

Walmart first caught wind of STRIVR Labs’ technology because of the startup’s focus on providing virtual reality training for athletes in American football, basketball and other sports. A Walmart employee who is a donor to the University of Arkansas football team happened to see STRIVR’s technology in action, and so began STRIVR’s collaboration with America’s largest private employer to take virtual reality training mainstream. It’s a significant step given Walmart’s stature as the employer of more than 1.5 million American workers.

Walmart wanted a mix of virtual reality training experiences to prepare Walmart associates in their daily interactions with customers, handling unexpected but rare incidents or disruptions, and being mentally prepared for the claustrophobic crush of the expected holiday crowds. That meant working with the STRIVR team to figure out how much time and space was needed in Walmart stores to create the virtual reality experiences for certain situations.

The STRIVR team also faced the special challenge of capturing the experience of huge crowds swarming into Walmart stores for holiday sales events such as Black Friday. Belch and some other colleagues spent Thanksgiving night hunkered down in a Walmart store to capture 360-degree video footage of the packed crowds that can test even the most seasoned Walmart associates.

“Just to allow associates to experience that, the instructors can say ‘We weren’t kidding, this is what happens when there’s wall-to-wall people,’” Belch says. “Also, there are things pertaining to the customer experience where people can learn to make the right decision when they’re frazzled.” 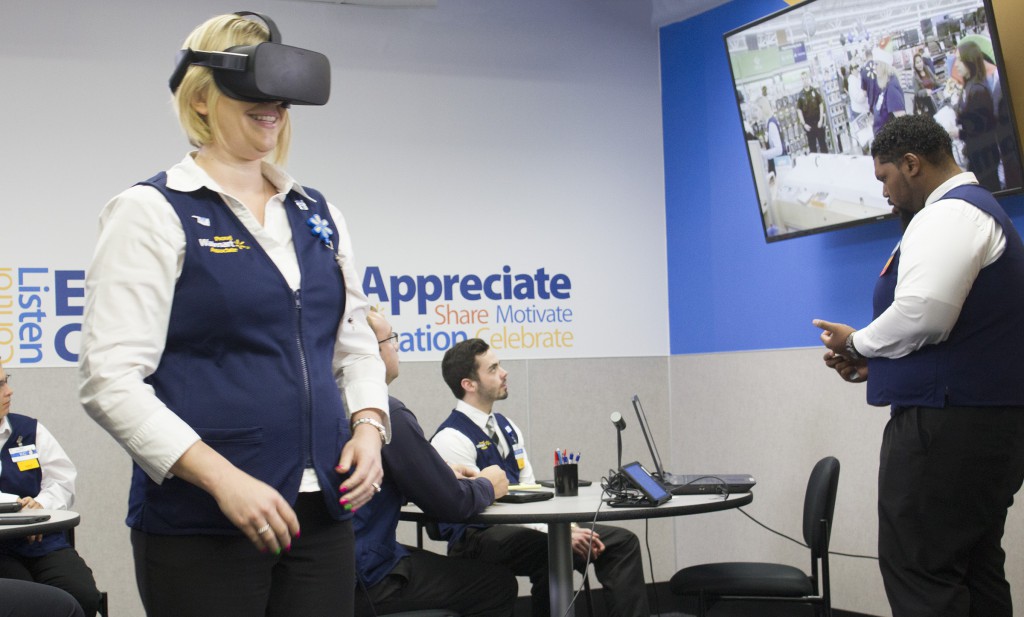 Walmart plans for all of its training academies to incorporate virtual reality experiences by the end of 2017. Credit: STRIVR

It’s unclear how much time each Walmart associate will get to experience these virtual reality training modules during the training academy program. But the STRIVR technology enables Walmart to project the wearer’s view from inside a virtual reality headset to a large TV screen, so that other members of the class can also learn from the experience.

STRIVR ended up creating virtual reality training modules ranging in length from 45 seconds to five minutes. Some of the training modules feature interactive choices that require the Walmart associates to make decisions. But others merely focus on exposing associates to certain experiences. Walmart has been testing out the VR training modules in 31 training academy sites for the past four months as a step toward full deployment.

Making the Most of Virtual Reality Training

Still, Belch pointed out that questions remain about how to make the most of virtual reality training. For example, researchers are still figuring out how much time is ideal for training sessions and how much rest is required in between. STRIVR knows from its past work with athletes that experiential or mental reps in practicing the same scenario matter in the learning experience. Ideally, the startup wants to create training experience that provide more mental reps with shorter and quicker sessions.

The startup also faces new challenges as it scales up its business with new clients such as Walmart. Each new customer requires custom, tailor-made virtual reality experiences based on its individual needs. That extra work required remains a “hurdle to widespread adoption” of virtual reality training, Belch says. STRIVR has already boosted the number of people on it payroll to about 50 employees with new sales and account managers, technical support staff and engineers to handle the expanded workload.

Technical difficulties can also arise because of unexpected software updates from virtual reality headset manufacturers, Belch explains. That would normally be frustrating under the best of experiences, but can be potentially crippling if virtual reality training is expected to work smoothly at scale for large business clients.

But perhaps the biggest challenge is about a company’s willingness to change its view of how it trains its employees. Belch praised Walmart’s willingness to commit the time and resources to learning how it could use virtual reality training on a broad scale and on a daily basis.

“This is about more than the technology, it’s about cultural and ideological shifts as it pertains to training and how much an organization is willing to change,” Belch says. “That’s our biggest hurdle and it has nothing to do with technology.”