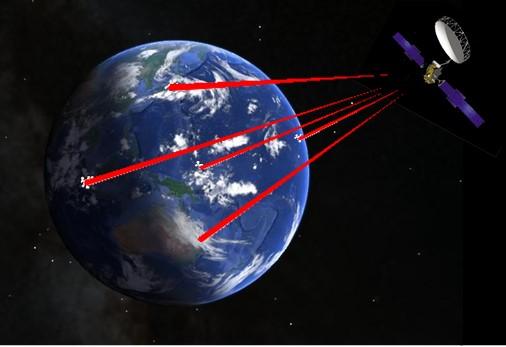 From the ground, researchers measured laser signals that originated from a satellite and traveled through Earth’s gravitational potential and the turbulent atmosphere. (Credit: Earth, Google; satellite, ESO)

Veering from the path of their counterparts at other institutions, researchers from the Max Planck Institute in Germany say they’ve found an easier path toward large-scale, unhackable communication networks.

They demonstrated that it’s possible to distribute quantum information to locations on earth via satellite with only minor modifications to existing technology.

Multiple arduous and costly endeavors have focused on developing new technology to achieve this goal, but this study, published Thursday in the journal Optica, finds that existing satellite technologies, taken to the edge of their capabilities, can send information in the quantum regime—something they were not designed to do.

They say, that within the next few years, satellites capable of distributing quantum keys may be launched, building the framework for more secure networks.

The view on the optical ground station in Spain. (Credit: Max Planck Institute for the Science of Light)

In principle, encryption is straightforward: A random number acts as a key letting the sender scramble their message, and the receiver uses this number to unscramble it. The difficulty arises in sending the key to both parties without third-party interception. Modern encryption relies on a “complexity assumption,” which posits that the effort of cracking the encryption is so great that no one would successfully manage it. Quantum encryption methods, says Christoph Marquardt, leader of the quantum information processing group at the Max Planck Institute for the Science of Light, are based “on physics itself” and can be proven—rather than assumed—to be secure.

The underlying physics principle is superposition—a quantum particle can be in two different states simultaneously until the particle is detected. As such, the random number key is not actually determined until the receiver has looked at the photons. The trick to this process is that the receiver randomly looks at the photons with one of two possible detectors, which differ by the state they expect to see the particle in. The receiver lets the sender know which detector was used for each photon and the sender lets the receiver know how this compares the initial photon polarization. At the end of this process both parties have a key which can be statistically analyzed for signs of eavesdropping. Assuming the analysis results are normal, they are guaranteed security. 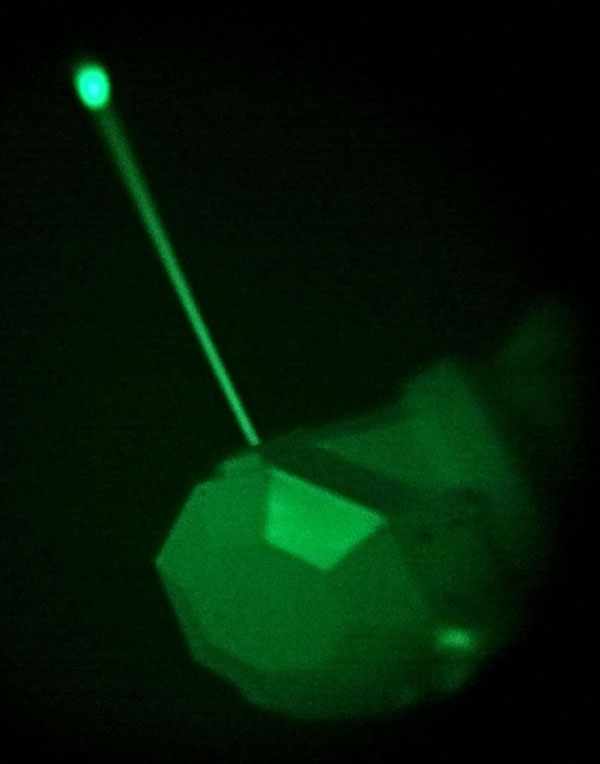 An infrared image of the laser beacon that was sent to the GEO-stationary satellite. (Credit: Max Planck Institute for the Science of Light)

Technology to distribute quantum keys has been implemented commercially in fiber optics communications, but with one major downfall: traveling through the glass optical fibers degrades the signal to the point where “after a few hundred kilometers basically no signal actually makes it out the other side,” says Norbert Lütkenhaus at the Institute for Quantum Computing at Warterloo University.

While quantum key distribution is theoretically ‘unhackable,’ Alexander Ling at The Center for Quantum Technologies in Singapore cautioned that “any encryption scheme can be secure on paper but you have to be very careful about the implementation…the hardware may have back doors or side channels that, even if there’s no malicious attacker, you may, by being careless, leak information out into the environment.”

Regardless, quantum keys appear to be the inevitable next step in encryption. The methods used by Marquardt still rely on contemporary random number generation (based on mathematical complexity), but technology to distribute quantum keys with entanglement— guaranteeing true randomness—are being developed alongside quantum key distribution in many studies.

“It’s not a technological question anymore. It’s more a question of whether there’s a market for it and whether people are willing to pay for it,” said Ling.