Join the Hunt for Planets Around Our Closest Neighboring Stars 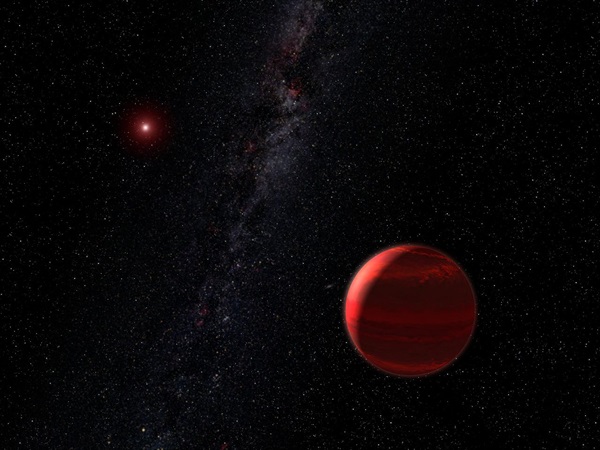 CHRX 73 B is a 12-Jupiter-mass planet circling a red dwarf star like the stars under investigation by the Red Dots campaign. (Credit: NASA, ESA and G. Bacon [STScI])

The Pale Red Dot team is coasting off the success of their discovery last year of a planet in the Proxima Centauri system system by casting its net even wider as the Red Dots campaign.

Whereas Pale Red Dot focused just on Proxima Centauri, Red Dots is looking toward Barnard’s Star and Ross 154 as well. These three stars will be held up to intense scrutiny by the team in the hunt for planets — or in the case of Proxima, additional planets.
Barnard’s Star has been a popular target since the 1963 announcement by Swarthmore College professor Peter van de Kamp of a Jupiter-mass planet around it. His observations ended up discredited, as the telescope he used at Sproul Observatory had a flaw that caused some stars to appear to “wobble” when they were doing no such thing.

“We are inviting anyone willing to collaborate to observe the stars’ brightnesses and to join our campaign,” Mikko Tuomi, a European Southern Observatory astronomer and Red Dots scientist, said in an email. “We have already 1,700 brightness observations of Ross 154 from five different observers and as many as 2,500 brightness observations of Barnard’s star from as many as nine observers (Barnard’s star is on the northern sky, so more accessible for US and European observers) using as many independent telescopes helping us in studying the variability of these stars in detail.”

And one of the observatories participating isn’t an optical telescope at all. It’s the radio telescope at the Arecibo Observatory in Puerto Rico.

“Planets can be detected in the radio spectrum because they disturb known radio emissions of the star (e.g., pulsars) or emit their own radio emissions,” Abel Mendez, director of the Planetary Habitability Laboratory at Arecibo, says.

Mendez says that no planets have been found by radio telescopes beyond a handful of pulsar planets, but the team is hopeful.

“Big short-periods planets in elliptical orbits around red dwarf stars are probably easier to detect since they might produce more interactions with the star (e.g., tides) to alter their flare patterns or frequencies,” he says.

The Red Dots team is logging its progress on its website. All three stars are less than 10 light-years away, so detecting planets around them could make our corner of the universe seem a little less lonely.