How Disney Tech Can Immerse Park Guests in ‘Star Wars’

Disney tech is getting ready to grant the wish of any Star Wars fan who ever wished to stand inside the cavernous space of a Star Destroyer hanger or help fly the Millennium Falcon during a space battle. The entertainment giant has promised a “revolutionary new vacation experience” at its theme parks that will supposedly include getting visitors dressed up in proper Star Wars attire and even allowing families to stay at a 100-percent immersive Star Wars hotel where everyone is in character all the time.

The new Star Wars: Galaxy’s Edge “lands” scheduled to open at both Disneyland Resort and Walt Disney World Resort in 2019 appear to go well beyond Disney’s famed dedication to having costumed staff stay in character. They seem designed around creating “living adventures”—set within the conflict between the First Order and the Resistance as depicted in the newest Star Wars films—in which visitors could earn extra galactic credits for doing well on a mission or end up being pursued by local bounty hunters if they barely pull it off. Crucially, Disney has already demonstrated or patented a wide array of technologies that could help create the Star Wars illusion for guests.

“Once you leave Earth, you will discover a starship alive with characters, stories, and adventures that unfold all around you,” Chapek said in a Disney blog post. “It is 100 percent immersive, and the story will touch every single minute of your day, and it will culminate in a unique journey for every person who visits.”

Disney “imagineers” described some of the details such as the 100-percent immersive hotel during Disney’s biennial D23 fan expo 2017, according to Gizmodo. That hotel will only be built at the Walt Disney World Resort, but both Disney World and Disneyland will feature other immersive storytelling adventures built around two major Star Wars attractions.

The larger attraction will take place within a Star Destroyer’s hangar bay and potentially involve being shot at by giant AT-AT walkers, whereas the second attraction will include the opportunity for visitors to help pilot the space freighter Millennium Falcon or take control of quad laser cannons to fend off enemy spacecraft.

But even the more ordinary experiences of standing in line for the rides, staying at the resort hotel, or checking out the DJ in the local cantina will supposedly all have storytelling elements to provide a personalized Star Wars experience for guests. To heighten the immersion, Disney may rely on technological tricks such as real-looking lightsabers, rides that require visitors to scramble away from danger rather than just sit inside a vehicle, and huggable robots roaming the buildings and streets.

No Star Wars theme park would be complete without giving visitors the opportunity to blast stormtroopers or possibly wield a Jedi lightsaber to deflect laser beams being fired at them. A Disney patent application filed in 2016 showcased that possibility of an “audience interaction projection system” that could potentially power certain attractions at the Star Wars: Galaxy’s Edge park.

“The audience member may actually feel as if they are launching powerful beams of laser-like light towards objects on the stage,” according to the Disney patent filing. The Disney tech involves a system of invisible light projectors and sensors or reflectors that can identify whenever a visitor may be pointing a device—such as a mobile phone or perhaps a Star Wars blaster—at a target such as an animatronic figure. Visible light projectors then create the illusion that the visitors are shooting lasers at the target in question.

This system could possibly enable visitors to fire Star Wars blaster-style weapons and potentially even “kill” animatronic stormtroopers or other enemies during certain rides or attractions. 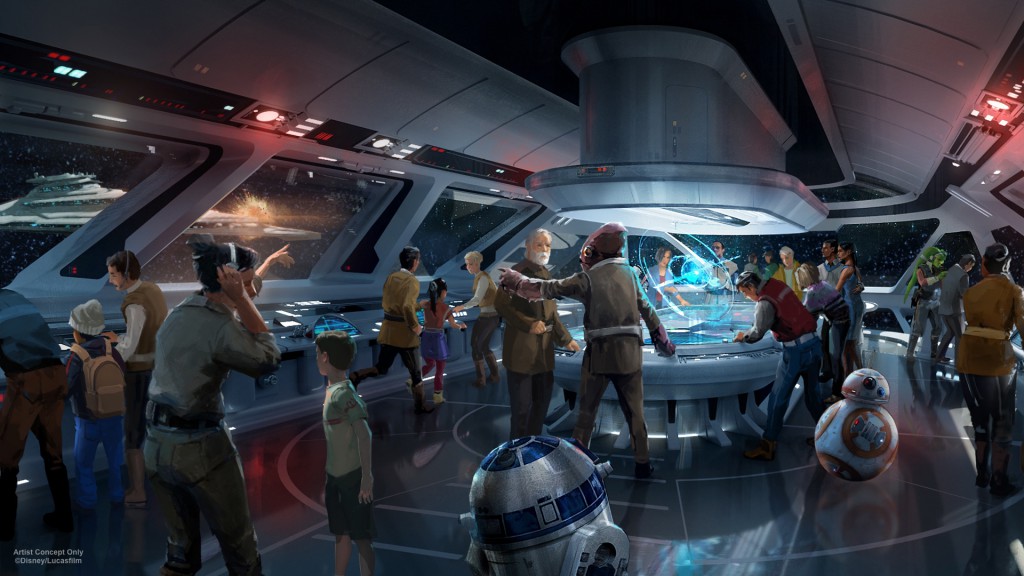 A Disney Star Wars theme park will include attractions such as having visitors help fight off enemy spaceships. Credit: Disney | Lucasfilm

Visitors more enamored with wielding a real lightsaber similar to the Jedi or Sith of Star Wars lore could also get their chance to shine. The same Disney patent suggests a way to create the illusion that visitors are using a lightsaber to deflect laser beams being fired by hovering drones—not unlike the training scene from “Star Wars IV: A New Hope”—or possibly lasers being fired by animatronic characters such as stormtroopers. Such interaction with Star Wars weapons could add a fairly unprecedented degree of immersion for visitors accustomed to more passive theme park experiences.

Another Disney tech that could help bring the Star Wars experience to life involves “trackless” ride vehicles that can maneuver independently of one another unlike the typical roller coasters or rides on rails featured at most theme parks that follow a fixed path through a ride space. An example of this could be an 8-person trackless vehicle—dubbed the “First Order Fleet Transport” in Star Wars parlance—that was on display at D23 Expo 2017 and showcased in photos taken by WDW News Today.

Disney visitors would likely get to ride that trackless vehicle during the “Battle Escape” attraction that takes place within the Star Destroyer’s hangar bay. That “Battle Escape” could involve visitors having to quickly get off a moving vehicle to escape some First Order stormtroopers and re-board the vehicle later on, according to an insider report from MiceChat that was highlighted by Slashfilm in October 2016.

This implies the vehicles may need the capability to automatically detect whenever passengers had boarded the rides or gotten off lest they leave someone behind. They would also potentially need to be able to detect obstacles or the presence of people in order to avoid colliding with visitors.

Two recent Disney patent applications from 2017 also reveal some other possible technologies behind such trackless ride vehicles. The patent filings refer to the idea that a trackless vehicle could adjust its own behavior and even route based on the “emotional state” and mood of individual passengers. For example, a vehicle that uses facial recognition to detect smiles on visitors’ faces whenever it spins around may throw in more maneuvers along those lines to amp up the fun. In another example, a vehicle that detected passengers getting bored and listless might decide to move to a new part of the attraction.

There are potential risks to having more independently-moving, trackless vehicles that also allow passengers to get on and off throughout the ride space. In addition to the safety issues of having moving vehicles and visitors on foot in close proximity, there is also the possibility that the overall ride will be slowed down if visitors take their time in re-boarding at certain points. But Disney seems to be betting that the immersion factor of having to physically scramble in avoiding capture by stormtroopers will pay off in an unparalleled experience.

Those Huggable Robots Are Watching You

Disney has already shown its dedication to creating believable robots and animatronic characters through its theme parks and ownership of the Star Wars franchise. Back in 2011, Disney filed a patent for a “magnetic spherical balancing robot drive” that helped create the BB-8 droid resembling an R2-D2 robot head on top of a rolling soccer ball. But a more recent patent filing from 2017 suggests Disney is also eying the possibility of soft robots that could enable park visitors to touch and even hug wandering robots.

The patent is plainly titled “Soft body robot for physical interaction with human.” It envisions technologies for creating a soft, flexible and responsive robot that can accommodate everything from human hugs to little kids accidentally running into the robot. Besides being made of soft materials, the robot could potentially use sensors to detect points of pressure from human touch and adjust its body in a way that minimizes potential harm if a child visitor is snuggling it tightly. 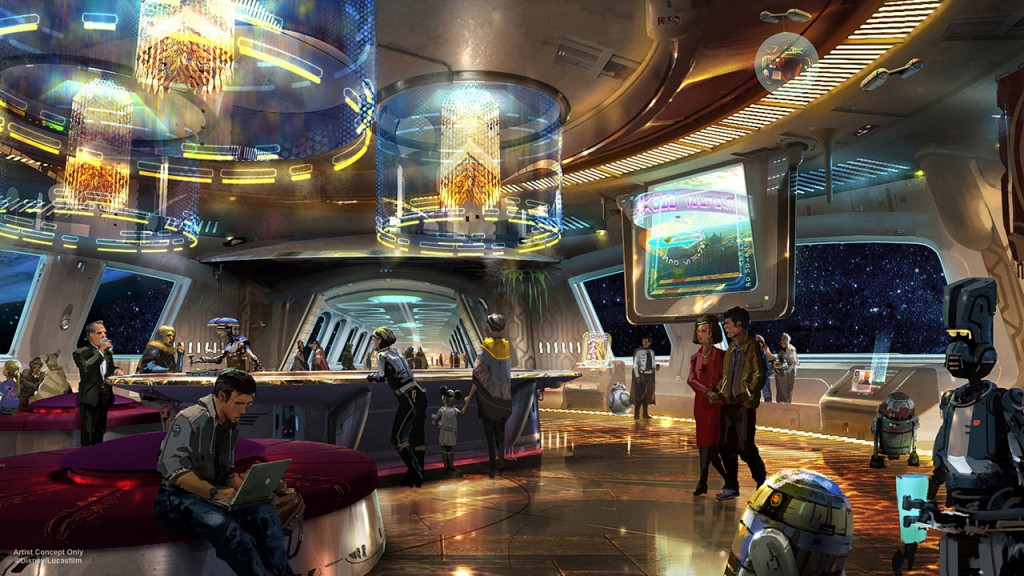 The Disney Star Wars resort will likely feature a variety of interactive robots and animatronic characters to enhance the sense of storytelling immersion for visitors. Credit: Disney | Lucasfilm

Both wandering droids and animatronic figures may also take advantage of gaze-tracking technologies that use cameras to detect where one visitor or the majority of guests are looking. That opens up the possibility for more lifelike interactions that make the droids or animatronic figures appear to be paying attention to visitors’ interests, or could potentially cue the droids or animatronic figures to start speaking if they notice human attention being focused upon them. In 2016, Disney received a patent based on this gaze-tracking technology that could end up driving interactions involving droid bartenders, tour guides or hotel clerks.

Personalized Star Wars Adventures for Everyone

Much of the Disney tech needed to pull off an immersive Star Wars theme park will not rely on the latest patents. Disney has already demonstrated the potential for tracking individual visitor itineraries and needs through its smart wristband system of “MagicBands” issued to millions of visitors each year. A Wired story from 2015 explained how the MagicBands wirelessly provide location and other guest information that enables Disney’s human hosts to greet families by name and even deliver food orders to their tables without any confusion.

The goal of the MagicBand is to enable a seamless visitor experience for Disney guests that provides the best itineraries and map routes for seeing each visitor’s favorite attractions, provides paperless ticket entry to attractions with a simple swipe of the wristband, enables visitors to unlock their hotel rooms, and even provides the capability for instant purchases if visitors choose to link their wristband to a credit card. 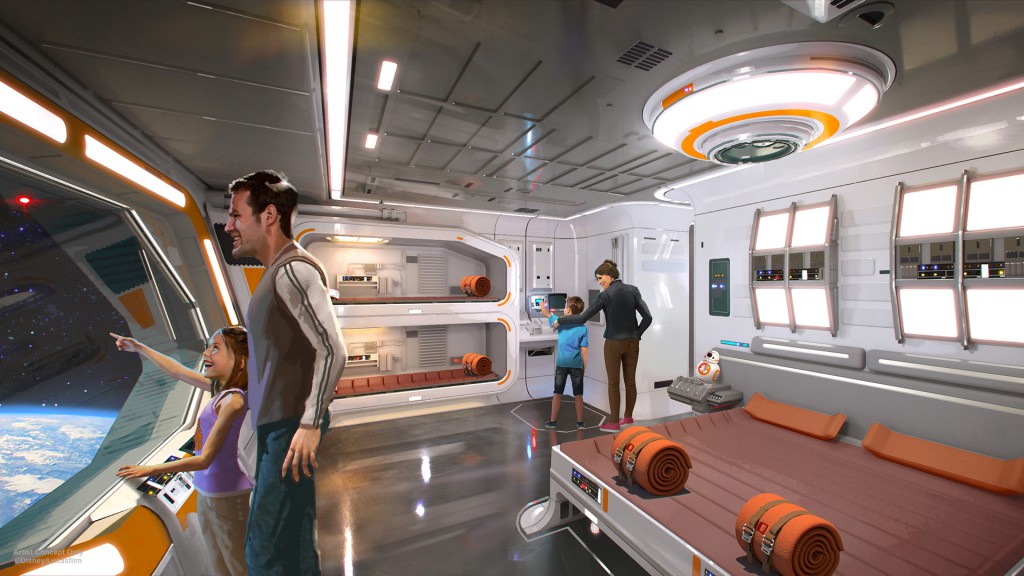 Disney announced plans for an immersive Star Wars hotel that will be a “one-of-a-kind experience where a luxury resort meets a multi-day adventure in a galaxy far, far away.” Credit: Disney | Lucasfilm

Given the existing Disney tech, it’s not hard to see how Disney might adapt the MagicBand system to enabling an even more immersive storytelling experience in Star Wars. The wristbands might help keep track of how well a guest performed in the Millennium Falcon attraction and reward that guest with extra “money” that can be spent on shop gifts. They could also keep track of which visitors performed poorly on the same attraction so that a certain Star Wars bounty hunter may accost them when he or she wanders into the local cantina.

There’s a good argument to be made that the Star Wars universe depicted in the films is based more on the illusion of science and technology than any real-life physics or engineering. But real-life technology seems well poised to help Disney’s Star Wars theme park convince many future visitors to believe in that Star Wars illusion through immersive storytelling.