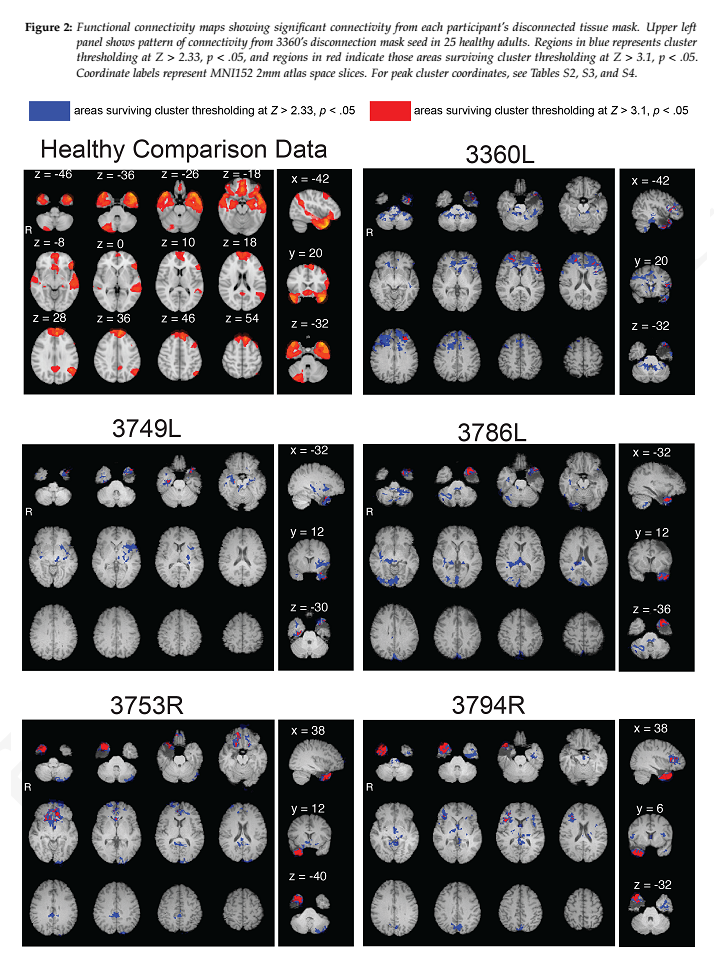 A new article posted on preprint site bioRxiv has generated a lot of interest among neuroscientists on Twitter. The article reports the existence of ‘functional connectivity‘ between surgically disconnected distant brain regions using fMRI, something that in theory shouldn’t be possible.

This is big news, if true, because it suggests that fMRI functional connectivity isn’t entirely a reflection of actual signalling between brain areas. Rather, something else must be able to produce connectivity – most likely it has to do with the constriction of blood vessels in the brain. Whatever the source of the non-neuronal connectivity is, it raises the worrying possibility that it might be contaminating fMRI studies.

The research comes from a University of Iowa team, with the first author being David E. Warren.

Warren et al. studied 5 patients who’d had surgery to disconnect one of their temporal poles, for epilepsy treatment. Here’s the resting state fMRI connectivity of the disconnected temporal pole (seed-voxel) within each subject, compared to the pattern of connectivity in healthy subjects with the same temporal pole seed.

In a nutshell, the results shows that in each of the five subjects, there were areas which were significantly “connected” to the disconnected temporal pole. Different brain areas were involved in different subjects, and the connectivity was relatively weak, with most blobs only appearing at the Z>2.33 cluster defining threshold and not the more robust Z>3.1 threshold.

Warren et al. conclude that their results cast doubt on the nature of fMRI connectivity:

In my view, this is a very nice piece of work, but the results are a little hard to interpret. Using surgical disconnection patients to study fMRI connectivity is a brilliant idea. However, the connectivity between disconnected areas was not very strong and, as it was variable, I suspect that it wouldn’t appear at all in a group-based analysis.

In other words, I’m convinced that Warren et al. have shown the existence of non-neuronal connectivity, but I’m less sure that it’s strong enough to have a major impact on the average fMRI study, although we certainly can’t rule it out.

There are some methodological questions. Warren et al. did not record measures of pulse and breathing from their participants. These variables, often referred to as physiological parameters, are commonly collected and used in fMRI connectivity analyses to control for the effects of blood pumping and the breath cycle which can cause various changes across the brain.

Warren et al. acknowledge that the lack of physiological measures is a limitation of their study; they note that “many neuroimaging studies” don’t include such measures, but it’s fair to say that many studies do, so ideally this one would have. As it stands, it’s unclear whether the non-neuronal connectivity seen in this study would be removed by controlling for physiological parameters.

A few other methods points were raised in a comment here.

Overall, this article should serve as a prompt for more work in this area, but I wouldn’t say it’s ‘doomsday’ for fMRI connectivity just yet.