Fallout from an Ancient Asteroid Collision Still Rains on Earth 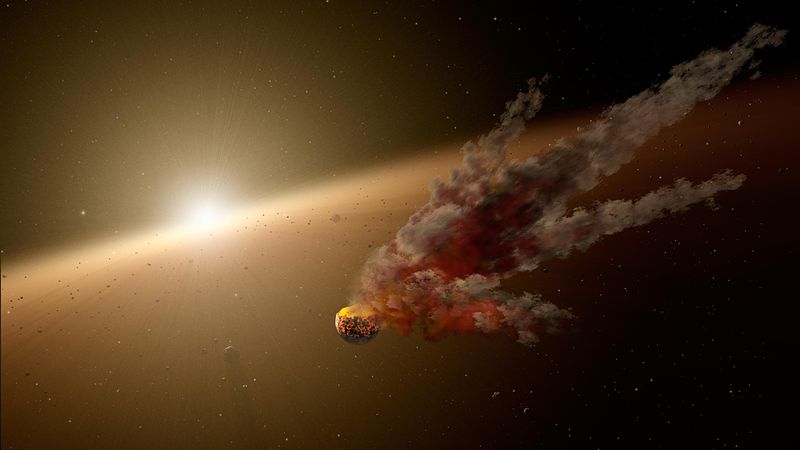 Thanks to the planet’s atmosphere, we live largely unaware of this celestial fusillade, which averages about 100 tons a day and mostly burns up long before hitting the ground. From the few that do make impact, researchers can gather clues about the composition of our solar system, with the goal of understanding how planets and other bodies emerged from an embryonic disk of dust and gas some 5 billion years ago.

However, it seems many of the samples researchers have to work with originated from a single event that’s been raining fallout for some 466 million years, giving us a biased picture of what’s actually out there.

At the moment, we seem to experiencing a fairly heavy rain of rocky meteorites called ordinary chondrites, which are distinguished by the presence of drop-like structures embedded in their bodies. Chondrites are further divided into three classes: H, L and LL, each thought to correspond to a different impact event long ago. We’re currently seeing a disproportionate number of H and L-type chondrites hit the Earth, but, it wasn’t always so.

Researchers from the Field Museum of Natural History, the University of Chicago and Lund University in Sweden recently conducted an analysis of sediment samples from the Ordovician period, some 466 million years ago, to give us a glimpse of what was hitting the Earth at a very different point in its history. They collected their samples from a site near St. Petersburg in Russia, where the layers of rock are known to have built up very slowly, thus making it much more likely that a meteorite will be found in any given strata. A similar site in Sweden was responsible for the “extinct” Österplana 065 meteorite discovered in 2016.

[We’re] doing space exploration with geological methods, essentially,” says Philipp Heck, the curator of meteorites for the Field Museum and lead author of the paper.

The researchers then dissolved 600 pounds of rock in acid and sieved through the remains in the hopes of sifting out tiny grains of chromite, called spinels, delivered to Earth by meteorites. Analyzing the isotopic composition of these spinels allows researchers to classify the kind of meteorites they came from and take a kind of census of impacts at different points in the Earth’s history. They published their work Monday in Nature Astronomy.

The time period the researchers were interested in occurred just before a major impact event somewhere in our solar system that delivered a hail of L-chondrite meteors to Earth beginning 466 million years ago. The bombardment was so heavy that it obscured nearly all other impacts in the geologic record for a million years, and we’re still feeling the fallout today.

Looking at a slice of time around a million years before the event, the researchers took a census of the meteorites that intersected the Earth’s orbit, and found that the cosmic rain looked very different back then.

Instead of the L- and H-chondrites that we see today, a different kind of meteorite, called achondrites, made up nearly half of the micrometeorite impacts in the Ordovician. Anywhere from 10 to 29 percent of these were a type of achondrite that likely resulted from a massive collision on Vesta, the second-largest asteroid in the solar system at over 300 miles in diameter.

Achondrites are meteorites that appear to have been melted and reformed at some point in their lives, such as on Vesta, where molten lava flows likely reshaped the surface at some point early in its life. Today, achondrites are considered rare, say the researchers.

In addition, there were many more LL-chondrites and fewer H-chondrites during the Ordovician. While the origins of these meteorites remain unclear, they likely result from periodic collisions among asteroids and other objects in the solar system, as well as gravitational perturbations from planets that alter the path of the millions of asteroids and other objects floating around the solar system.

By just studying meteorites, we’re likely to never get a balanced view of the solar system, however, says Heck. Not only did they find that our current barrage of meteorites was biased, but their results indicate that some kind of bias is always present.

In other words, the heavenly rock showers that bathe the Earth give us only a snapshot of what the solar system looks like right now. For the full picture, we need to look elsewhere.