Facial Recognition Software: The Next Big Thing in Species Conservation?

How do you care for the creatures you love? You shoot them with tranquilizer darts, capture them in cages, embed microchips, pierce their ears or make them wear funny collars.

For scientists who monitor endangered species, these are tried-and-true methods to count and track individuals in a given population—along with photography and experts’ sharp eyes. But capturing or sedating an animal is stressing (and could cause physical harm), and boots-on-the-ground counts can be inconsistent and costly.

So researchers asked a question that’s come to define a generation: Can a computer do this?

If the LemurFaceID system is any indication of preliminary success, it sure can. Biologists and computer scientists at Michigan State University built a facial recognition system that, with a little training, correctly identified individuals in a set of red-bellied lemur photos with 98 percent accuracy. The system has room to grow, but it’s an early indication that facial recognition is yet another innovation that will change the conservation counting game. 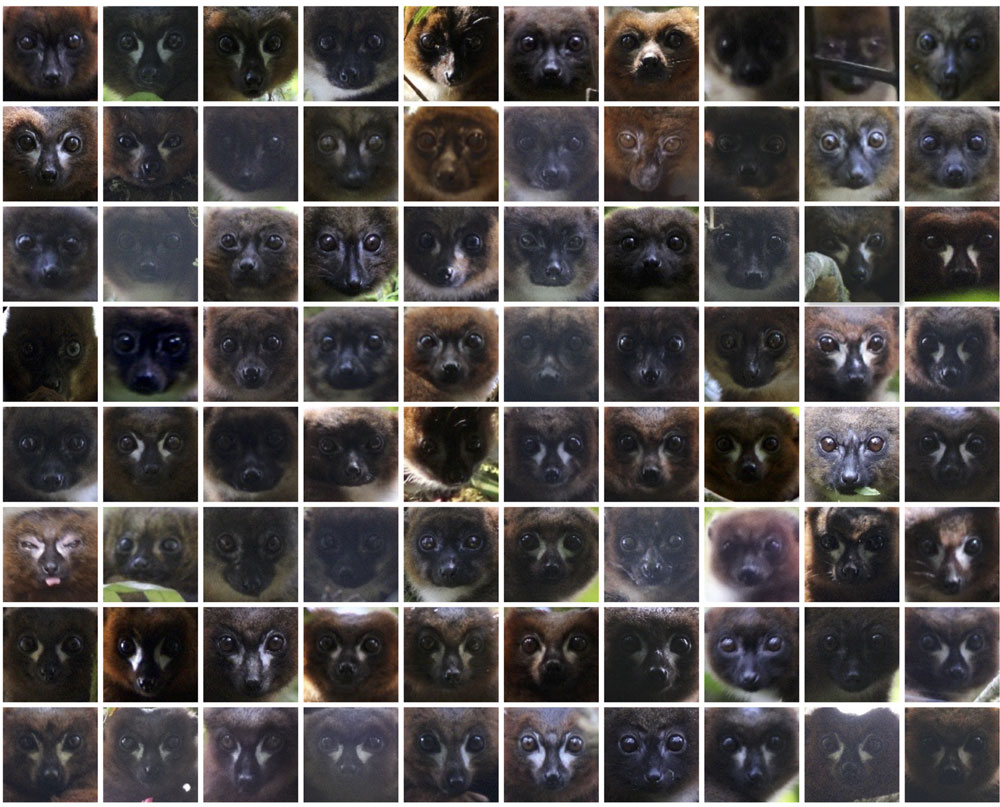 Anil Jain, an MSU biometrics expert, spends his days developing ways to find people. He has six patents on fingerprint recognition technology. He developed a system that identifies criminals by tattoo. He can match a face caught on surveillance tape to a database with millions of images to ID the suspect.

So when biologists Rachel Jacobs of George Washington University, and Stacey Tecot of University of Arizona asked Jain if he could work his magic with lemurs, he said, “That’s pretty interesting, we’ll give it a try.”

Jain used a dataset of roughly 462 images of 80 red-bellied lemurs, taken in Madagascar’s Ranomafana National Park, and 190 images of other lemur species to train a facial recognition system, called LemurFaceID. “Training” entails feeding image data through an algorithm that calculates variations between pixels. Each pixel is a string of 1s and 0s, so these algorithms yield mathematically unique patterns, or solutions, that distinguish a face, or a lemur, from one another.

Facial recognition systems key in on landmark features—the spacing between the eyes, nose-to-mouth rations, blemishes and other marks—to build an identity. Ideally, you’d want a database with millions of images for training, but Jain had 650 or so. Therefore, his team had to manually identify the locations of lemur eyes and adjust the cropping and orientation of images to get a nice portrait. A so-called convolutional neural network (CNN) could do all of this automatically, if they had enough images.

Still, even with a small dataset, Jain’s system worked—it could identify an individual from a group of images. Jain said unique fur patterns on the face seemed to be the primary differentiator the system picked up on, and he thinks the technique would work just was well on other species with variable facial hair and skin patterns, such as bears, red pandas, raccoons or sloths.

Still, the LemurFaceID won’t work if the lemur isn’t looking directly into the camera, or, say, its fur obscures key features. However, with significantly more photos—or data—a so-called CNN could look past these inconsistencies. Jain and company published their work in the journal BMC Zoology.

“The problem is still very difficult in that sense. We have done the proof-of-concept, if we have frontal photos we can do recognition,” says Jain. “I think it’s a promising area because you could put a facial recognition system on a mobile phone.”

Now, the key is to capture lemurs on camera to train the data-hungry system before it can truly be an asset in the field. With enough training, most computer vision systems consistently outperform humans in image recognition tasks. LemurFaceID could help researchers improve their counts and identify lemurs from a distance rather than resort to capture-and-collar. Lemurs are also illegally captured and sold as pets, so a mobile facial recognition program could help law enforcement and researchers report sightings of captive lemurs.

“Studying lemur individuals and populations over long periods of time provides crucial data on how long individuals live in the wild, how frequently they reproduce, as well as rates of infant and juvenile mortality and ultimately population growth and decline,” Tecot said.

Protecting endangered species is an increasingly high-tech affair. Today, drones are routinely deployed to survey vast populations of migrating animals, such as waterbirds and sea mammals. GPS trackers in artificial elephant tusks can lead authorities to poachers. Machine learning algorithms are digesting poacher behaviors and offering predictions of where they’ll strike next. No doubt, as the method improves, facial recognition will also find its place in the ongoing effort to aid the survival of various species.