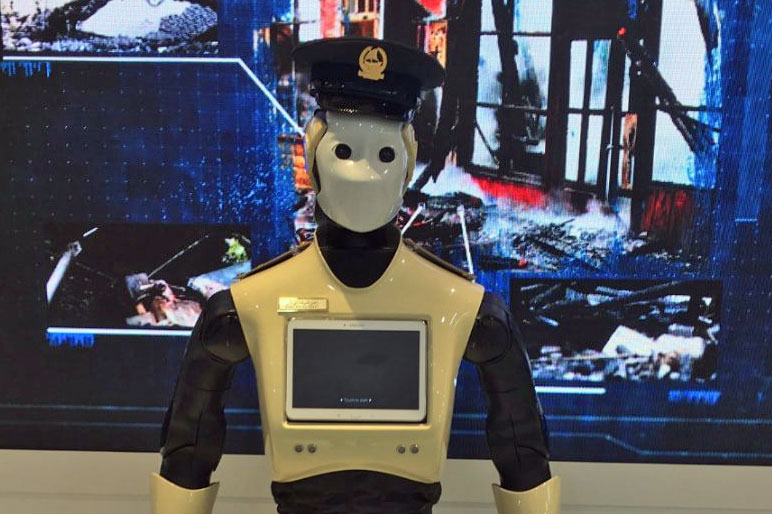 Some of the world’s first robotic police officers will reportedly hit the streets of Dubai in May.

Brigadier Abdullah Bin Sultan, director of the Future Shaping Centre of Dubai Police, made the announcement Monday during a police forum held in the city. By 2030, Dubai officials hope that up to 25 percent of their police force will be artificially intelligent. This, from the same crime-fighting organization that has Lamborghini, Ferrari and Bentley patrol cars parked in its garage.

The officer droids, which still lack an official name, were showcased during the GITEX “11 Best Police Practices” forum this month, and are the first of their kind in the United Arab Emirates. They were unveiled a few years ago, but now they’re ready for duty.

Created in conjunction with IBM, the droids will not only don pleasant and non-threatening facial expressions, but will also exercise mechanical manners as well. They can greet individuals in multiple languages, shake hands, salute fellow officers, and will even scan faces from a distance of 60 feet– which isn’t at all alarming.

The police bots are equipped with an assortment of smart features. Touch screens are incorporated in their bodies, and can be used by citizens to report crimes, request help, or pay traffic citations. Microphones imbedded in the robot’s chests send recorded feeds directly to Dubai police call centers. The droids also have a scanner with a 30-foot range, so a game of tip-the-officer-droid isn’t likely. Bad guys, be warned.

Brigadier Khalid Nasser Al Razouqi, the General Director of Dubai’s Smart Services Police Force program, told Gulf News that officer droids are just one element of a high-tech plan to make Dubai one of the safest cities in the world.

Taking A Byte Out of Crime

Along with the incorporation of these robot officers, Dubai is also planning to adopt a series of other emerging crime solutions, such as a national DNA data bank. Law enforcement officials believe this will revolutionize the way they track and prevent what they refer to as “mysterious” or anonymous crime. The police bots would, of course, have access to this database as well.

The officer droids will surely undergo plenty of tweaks and upgrades in coming years, but should there be an issue with your local robot cop, rest assured, they’ll fix it.