As the Trump administration proposes to gut climate change funding, the climate continues to change 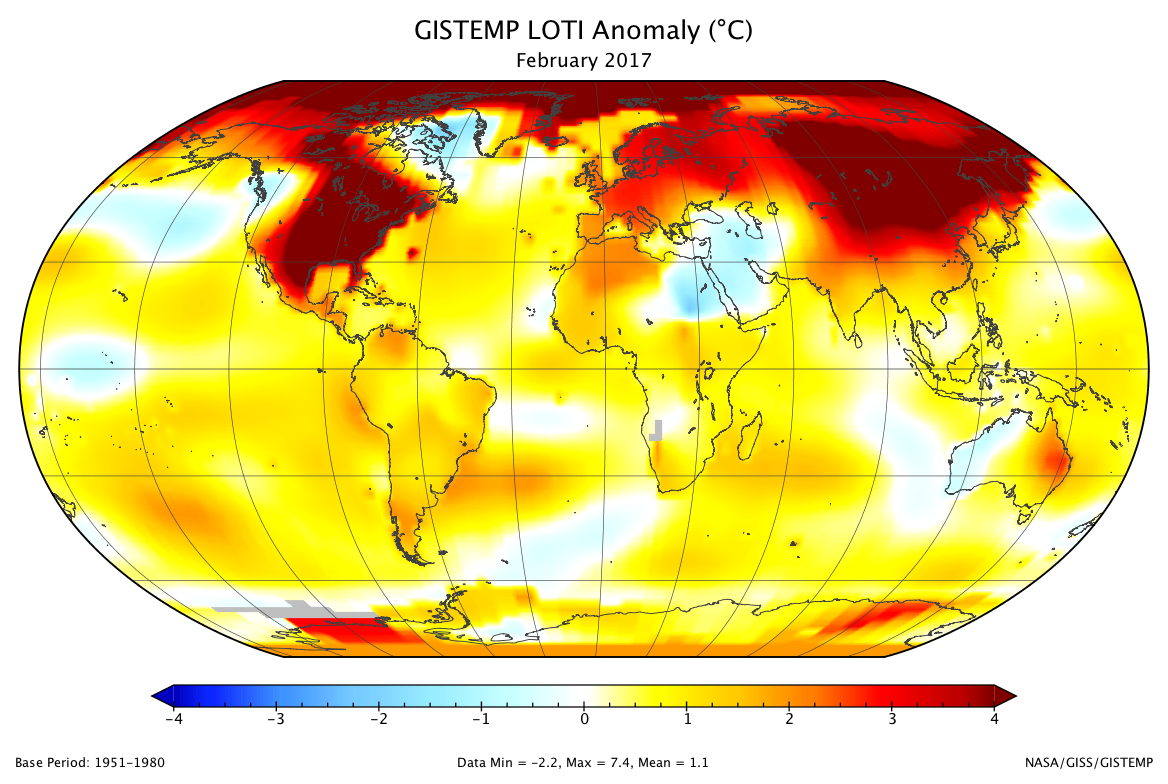 Last month brought scant relief from global warming, and there’s a chance that 2017 could turn out to be the warmest year on record

Even though the warming influence of El Niño is long gone, and 2017 was expected to offer some relief from record temperatures set last year, February saw very little letup in global warming.

And now there’s at least a chance that 2017 as a whole could be headed for the record books.

Meanwhile, the Trump administration is moving aggressively to halt U.S. efforts at combatting climate change, and to blind us to continuing change through cuts to monitoring programs.

This past month was second only to February 2016 as the warmest in records dating back to 1880, and it wasn’t really all that much cooler. That’s according to the latest analyses by both NASA and NOAA.

By NASA’s reckoning, last month was 1.1 degrees Celsius warmer than the mean February temperature for the 1951-1980 period. That was just 15 percent lower than February of 2016, the record holder for warmest February.

As NASA’s graphic above shows, conditions in February were particularly warm in North America and Eurasia.

And let us not forget the Arctic, which has been warming twice as fast as the rest of the globe:

The last three months were the warmest winter (Dec-Feb) in the #Arctic since record keeping began. pic.twitter.com/LyDPqZhTUl

To be clear, “warmest” in the Tweet above from Robert Rohde, lead scientist for Berkeley Earth, does not mean warm. Even though a weather buoy near the North Pole briefly registered temperatures at the melting point this past winter, overall the Arctic was plenty cold during December through February. But temperatures in the region did run higher than average for that time of year — so much so that they represented the highest departure from normal on record, according to Rohde.

For awhile, it seemed that maybe 2017 would pan out with a different narrative, and offer us at least a modest respite from the record-setting level of global warming seen in 2016. But now, those hopes could be evaporating, thanks to a very warm start to the year.

With both January and February 2017 being warmer than the 2016 average, the odds of 2017 finishing warmer than 2016 continues to increase. pic.twitter.com/48rsfvmOXK

What are the odds that 2017 is headed for the record books?

“Our simple statistical model is suggesting a roughly 65 percent chance of 2017 being warmer than 2016 based on the very warm start to 2017,” Tweeted Robert Rohde.

Not everyone agrees. Gavin Schmidt, head of the NASA unit that tracks global climate, responded that based on their analysis, 2017 currently stands only a 12 percent chance of beating out 2016 for title of record-warmest year.

Of course, only time will tell. But the cooling La Niña episode that last fall replaced 2016’s blistering El Niño was very weak — and as of February, it was officially gone. Now, there is some evidence that El Niño could return, which would give yet another boost to global temperatures, atop the long-term warming caused by human activities. But a rather large caveat is in order here: El Niño forecasts made in spring are not very reliable.

Whether 2017 eventually nudges 2016 out of the record books or not, the long-term trend could not be clearer, as this graphic illustrates in a rather interesting way (make sure to click on it to see it full size):

You can find the original graphic here, created by Makiko Sato, a senior research scientist at Columbia University’s Earth Institute, using NASA data. That original was broken into three separate sections; I’ve stitched them together in Photoshop to produce one seamless image.

Each square represents a particular month, starting in 1880 at the extreme left and ending in 2017 at the extreme right. The color in each square is indicative of how much the global average temperature departed from the long-term average during that month. White squares are months when the global temperature was about average. Dark blue ones are the coldest months, whereas hot pink are the warmest (with black coming in second).

The row of squares along the top shows all temperature anomalies in January between 1880 and 2017, from left to right. Each row below it represents the next month, down to December at the bottom of the graphic.

The transition from blue to yellow to orange to red and then on to pink is certainly uneven. But once you understand what you’re looking at, I think it is difficult to deny the reality of what’s happening to the global climate.

But as difficult as it may be, the Trump administration seems more than up to the task — as their recent budget proposal shows.

Speaking at a press conference about the administration’s plans for funding of research and other initiatives on climate change, Mick Mulvaney, White House Budget Director, was blunt:

Regarding the question as to climate change, I think the President was fairly straightforward — we’re not spending money on that anymore; we consider that to be a waste of your money to go out and do that.

The administration’s proposed budget aims at terminating federal programs to lower U.S. emissions of climate-altering carbon dioxide and other greenhouse gases. It would also gut diplomatic efforts to slow climate change. And it would axe entire scientific missions to study the climate. Among them: The Plankton, Aerosol, Cloud, ocean Ecosystem mission, the Orbiting Carbon Observatory-3 mission and the Climate Absolute Radiance and Refractivity Observatory Pathfinder mission.

The administration’s intention of eliminating programs to monitor climate change seems particularly telling. This is worse than ‘out of sight, out of mind.’ This is even worse that creating “alternative facts” to compete with actual, true, verified facts.

This is nothing short of taking a hot poker and plunging it into our eyes to deliberately blind us to reality.