Blue Origin Wants to Land Rockets on a Floating Platform, Too 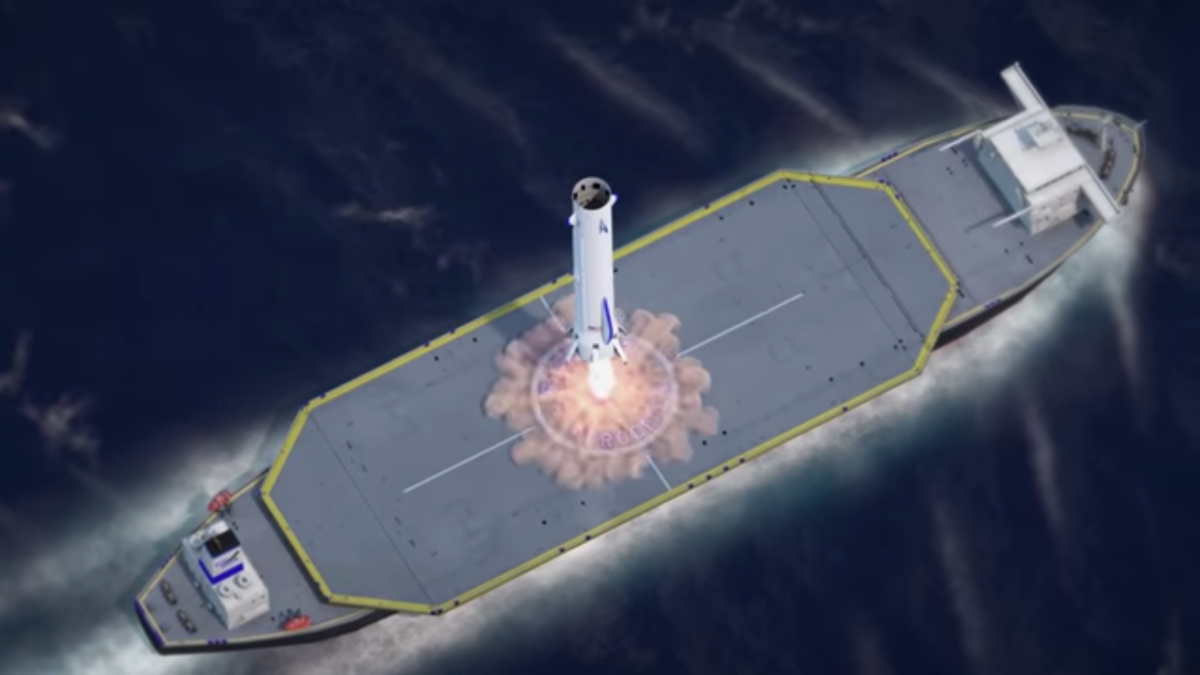 Blue Origin today unveiled a video demonstrating takeoff and landing procedures for its New Glenn rocket. Feel like you’ve seen this act before?

You’re not alone; the process looks very similar to the maneuvers performed by SpaceX’s Falcon 9 rocket on its trips to space. The short presentation shows the rocket lifting off, delivering a payload to orbit and touching back down on an oceanic barge. From the neat flip the rocket performs on the way down to the barge landing, Blue Origins appears to be following in the footsteps of Elon Musk and company.

While the New Glenn isn’t predicted to launch until 2020, it will be used to deliver some of Blue Origin’s first payloads to orbit, powered by seven BE-4 rockets. The launchpad appears to be the LC-36 pad the company plans to use for future missions, and their upcoming manufacturing facility is visible in the foreground as well.

It’s likely not a case of billionaire-see-billionaire-do, however. As The Verge points out, Blue Origin filed a patent for a similar water landing back in 2010, and an ensuing legal battle between the two companies resulted in the withdrawal of many of the claims. In any case, the idea appears to be a sound one — SpaceX has completed several barge landings over the course of the past year or so, although not without a few mishaps along the way.

The New Glenn will be another step forward for Blue Origin and its founder, Jeff Bezos. SpaceX has gotten the lion’s share of the publicity lately, as Musk recently announced plans to take two customers to the moon in 2018, in addition to regular trips to the International Space Station. Blue Origin’s upcoming rocket should allow the company to compete with SpaceX for paying customers, a move that would allow it to sketch a path to profitability.

Tentative steps these may be (or in Blue Origin’s case, animated steps), but it’s still pretty awesome to even be talking about potential space tourism.

The New Glenn will be able to carry around 100,000 pounds of payload to near-Earth orbit, and 29,000 pounds to geostationary orbit, Bezos says, and is projected to put out almost 4 million pounds of thrust.

Along with the video, Bezos also announced that Blue Origin had secured its first paying customer, French satellite company Eutelsat. The New Glenn will deliver one of their spacecraft to geostationary orbit sometime in 2021 or 2022. This follows the announcement yesterday by Bezos on Twitter of a completed BE-4 rocket booster.

Here’s one more shot of BE-4 in its transport cradle. pic.twitter.com/T2HdZ3UtQZ