Why Do Flamingos Stand on One Leg?

Author Vishay SinghPosted on May 23, 2017May 24, 2017Categories Discover Magazine

Flamingos are striking not only for their brilliant pink plumes, but for how they often stand on a single slender leg, even when asleep.

Now scientists find that standing on one leg may counter-intuitively require less effort for flamingos than standing on two. It’s a finding that could help lead to more stable legged robots and better prosthetic legs.

One prior explanation for the mystery of why flamingos stand on one leg is that it conserved body heat, as doing so places one less leg in the cool water where they feed. Another possibility that scientists raised over the years was that such a stance reduced muscle fatigue, but until now, researchers had not directly explored how much muscle activity the birds needed to balance on one leg.

Neuromechanist Lena Ting at Emory University and her team previously examined how people standing on one leg kept their balance, which led comparative neuromechanist Young-Hui Chang at the Georgia Institute of Technology to suggest investigating flamingos. Chang’s prior work in zoos helped them conduct research on the birds at Zoo Atlanta.

To help the scientists better understand flamingo anatomy, “we were very fortunate to get two frozen flamingo cadavers donated to us by another zoo,” Chang said. However, when driving the birds back to the lab, Chang recalled that he “had not anticipated how long their legs would be. My cooler was not big enough! I spent the whole drive back to Atlanta nervous about them thawing out. But I worried for nothing. The insulation from the feathers is amazing — if anything, I had trouble thawing them out for our study and had to use heat lamps for several hours to get them thawed out.” 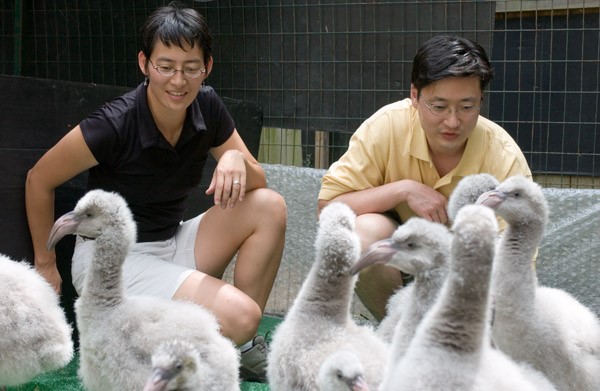 As the scientists dissected the cadavers, Chang recalled picking up a bird by its leg below the knee and finding the body kept “surprisingly stable. Even across wide angles of tilt — up to 75 degrees pitching the body backward — the knee and hip did not seem to budge.”

The flamingo cadavers showed that the birds could passively support their body weight on one leg without any muscle activity.

“That was the ‘Aha!’ moment when we knew we were on to something special,” Chang said. “If a dead flamingo could do it, then it is probably available for live birds to do.”

Surprisingly, cadaver flamingos could not stably hold a two-legged pose. This suggested it takes more active effort from muscles for the birds to stabilize a two-legged stance than a one-legged one, Ting said.

In addition, the researchers analyzed eight live juvenile flamingos as the birds stood on a plate that measured forces they generated on the ground. They found the flamingos swayed less as they became less active.

“When the birds closed their eyes and fell asleep on one leg, presumably with very little muscle activity, their postural sway was seven times lower compared to when they were very active,” Chang said. 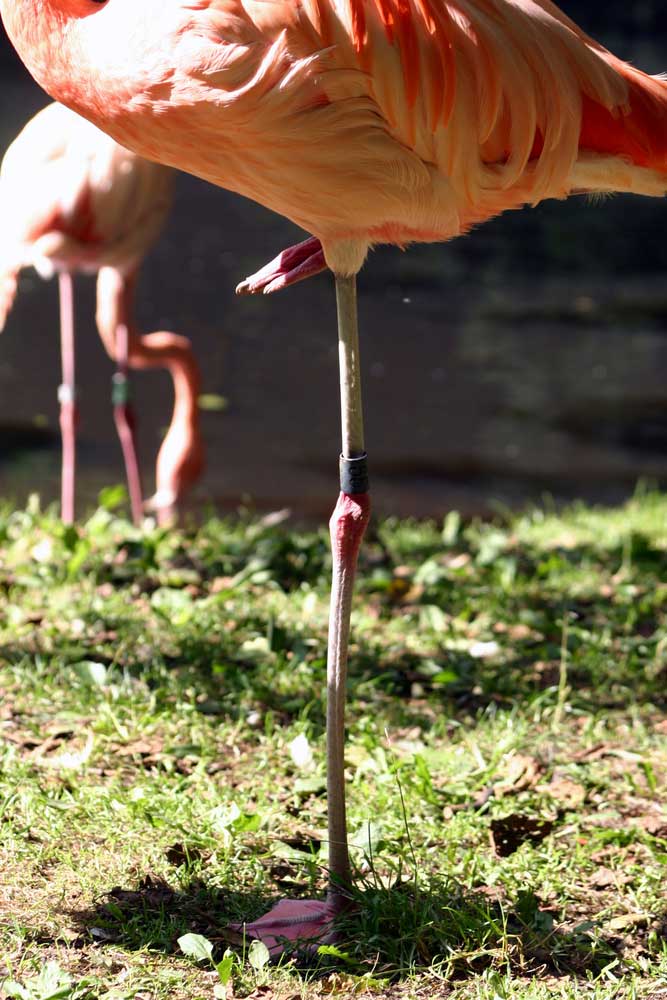 These findings suggest that flamingos rely on passive mechanisms instead of active muscular effort to to support their body and control their balance as they stand on one leg.

“We still don’t know what anatomical mechanisms are engaged in the one-legged stance that allows for this, but as far as we can tell, it is related to the skeletal anatomy,” Chang said. “We would need to directly image the skeletal anatomy during this behavior — for example with X-rays — to really get at it, which is a direction for future research.”

The researchers suggest that a flamingo standing on one leg resembles a vertical, balanced, upside-down pendulum. Such a pendulum could in principle keep balance with little to no muscle activity. “I think the very idea that one-legged stance may cost less energy than standing on two legs is very exciting,” Chang said.

“It is counterintuitive, because we typically view standing on one leg as being very difficult and we tend to equate difficult things with consuming more energy.”

This research could help explain why many other bird species stand on just one leg, the researchers said.

“It may also have some important applications for inspiring the design of more efficient legged robots and powered prosthetic devices,” Chang said.

It remains uncertain whether flamingos stand on one leg to reduce muscle activity, save body heat, both, or neither. The researchers need more direct measurements of muscle activity and heat loss in live birds to further test these ideas, Ting said.

Chang and Ting detailed their findings online May 24 in the journal Biology Letters, but the research was carried out during Chang and Ting’s spare time, without direct funding.

“It was a labor of love — doing science simply for the sake of learning how nature works,” Chang said.