Whip Spiders Use Their Feet to Smell Their Way Home 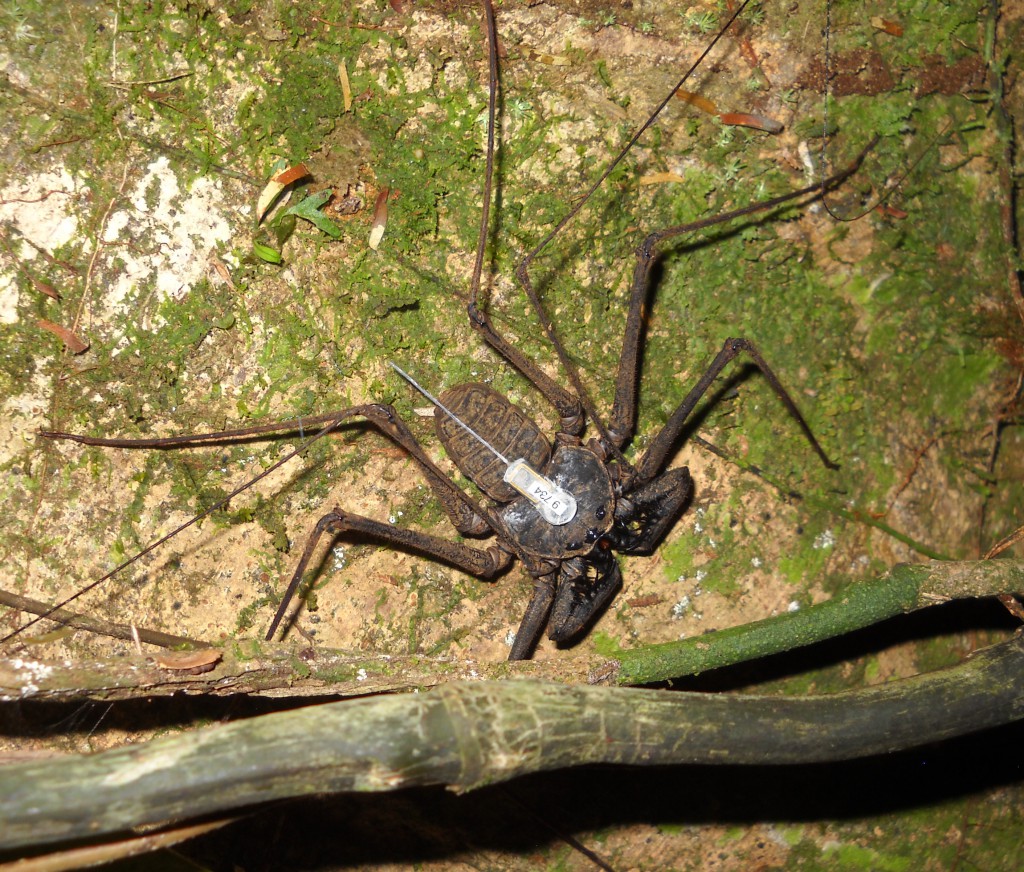 After a late dinner, a jungle-dwelling whip spider can’t rely on an Uber driver to get her home. She has to find the way herself, in the pitch-black, picking her way over thick undergrowth to reach the tree she lives on. It’s a trick she can even manage when plucked from her home tree and tossed into the forest at random, up to 10 meters away. Now scientists think whip spiders don’t use her eyes for this homing feat—they use their feet.

Whip spiders hunt by night and hunker down at dawn under logs or in tree crevices. Their homing ability is especially impressive given the dense rainforests where they live. They can’t navigate by the sun, like a honeybee, or by the stars, like a dung beetle. So how do they find their way?

Verner Bingman, who researches animal migration and navigation at Bowling Green State University, and his colleagues wondered if the answer might lie in the whip spider’s legs. Specifically, the front two. These “have evolved into antenna-like structures,” Bingman says. (He and his coauthors describe these legs as “elegant,” which is probably a matter of taste.) The antenna-like legs carry multiple types of sensors, including ones that detect chemicals and possibly humidity.

During two field seasons, the researchers captured 30 Paraphrynus laevifrons whip spiders from a Costa Rican rainforest. They snatched the spiders at night after they emerged from their hiding places. Then they glued tiny radio transmitters to the arachnids’ backs (the spider in the photo above is wearing one).

The researchers deprived some of these whip spiders of their sight. Given the impracticality of creating tiny blindfolds for spiders, they simply painted over all eight eyes with black Wet ‘n’ Wild nail polish. For another group of spiders, the researchers took away the ends of their antenna-like front legs. (In the first field season, they painted over the tips of these legs with nail polish; in the second year they trimmed the ends off the legs entirely to see if this produced a different result, which it didn’t.) Spiders in a third group were controls. They got a coat of nail polish on two of their ordinary back legs.

The researchers carried each whip spider 10 meters away from its home before letting it go. Over the next 5 mornings, they used a radio receiver to check the locations of those spiders and see which ones had made it home.

The researchers think the spiders used smell sensors on their legs to navigate—but they have no idea what smells the spiders followed. Searching for the scent of their home tree wouldn’t have helped them, because the same tree species grew all around them. Bingman won’t even hazard a guess as to what scent cues guided the spiders home. “Therein lies the mystery,” he says.

And what about the single footless spider who actually made it back home? The researchers noticed that they’d released this spider at a similar time and place to a visually deprived spider who lived on the same tree—and both spiders reached home that night. The coincidence “strikes us as extraordinary,” they write. They suspect that the footless spider found the eyeless spider and followed it back—a rare, successful case of the blind leading the blind.