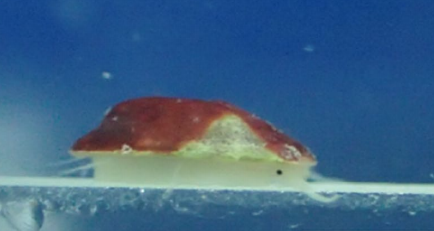 If you think house hunting is hard, consider the plight of this snail. It lives only in tide pools in southern Japan. Within those tide pools, it only lives in holes carved out of rock—specifically, holes dug by sea urchins. But it can only move into one of those holes after the hole-digging urchin has moved out. When a second, differently shaped sea urchin moves into the hole, it leaves a gap between its spiny body and the wall of the burrow. It’s this nook that the snail snuggles into.

Broderipia iridescens is about half a centimeter long, with a shell shaped like a shallow, flattened cone. It “creeps swiftly” on three pairs of tentacles, write Luna Yamamori and Makoto Kato of Kyoto University. They knew little about the rare species except that other researchers had found it tucked into some sea urchin pits. When Yamamori and Kato conducted a census of tide-pool life, they learned more about where the secretive snail lives and creeps.

The authors studied three tide pools along a rocky shore in Shirahama, on the southern coast of Japan. Within the three pools, they found more than 700 pits dug by sea urchins.

Not all sea urchins can burrow into rock. The rock-boring species have a circle of incredibly sharp teeth on their undersides. After excavating their pits, these sea urchins duck inside to protect themselves from predators. (The spines all over their bodies are pretty good protection too.) Some other sea urchins cannot bore into rock, but—knowing a good thing when they see it—live inside the holes that earlier urchins have dug.

The researchers found three sea urchin species in the tide pools, one rock-borer and two non-borers. And they found plenty of other species using urchin holes and spines for their own protection. There were fish and parasites clinging to the urchins’ shells. There were shrimp living cozily with non-boring urchins too: brown ones on the shells of the browner sea urchin species, and purple shrimp on the urchin that’s more purplish.

They also found B. iridescens, the secretive little snail. Unlike the other moochers in the pits, it never turned up on the bodies of sea urchins. The snail only lived on the walls of the holes—and only holes that non-boring urchins were living in.

The researchers plucked sea urchins from their hideouts and packed oil-based clay into the pits to make molds. Studying these molds and the shapes of the sea urchins’ shells, they saw key differences between borers and non-borers. The non-boring sea urchins have domed tops and flat undersides, like a coconut macaroon. But rock-borers have the same shape turned upside-down: their tops are flat and their bottoms are domed. They also have thinner spines that they can fold up, and more short spines on their undersides.

These features let rock-boring urchins fit snugly into the holes they’ve dug. When the researchers poked them with a spatula, these sea urchins folded up their spines and retreated deep in their holes. But the non-borers who squat in the holes don’t fit as well. 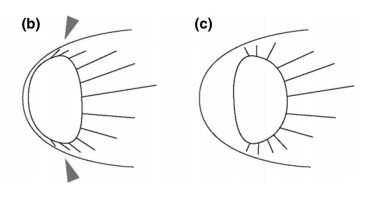 Left: a rock-boring sea urchin hiding in its hole (the arrows show folded spines). Right: a non-boring urchin in the same hole. Not pictured: a coconut macaroon.

It’s this imperfect fit that keeps B. iridescens alive. When the researchers traveled to several other rocky shores in southern Japan, they found the snails only in sea urchin holes.

There’s a word for this, by the way. An animal that takes advantage of another’s living space is called an inquiline. This snail seems to be an obligate inquiline, meaning it can live nowhere else.

To see the relationship between Broderipia iridescens and its host in action, the researchers put non-boring urchins and snails into aquaria in the lab. They also put glasses into the tanks as artificial pits. When a sea urchin found a glass, it crawled inside, followed by the snail. But in tanks with no hiding places, the sea urchins kept walking and walking, searching for a home. The snails—perpetually unsatisfied house hunters—followed after them.