The Brightest Pulsar Has a Complex and Powerful Magnetic Field 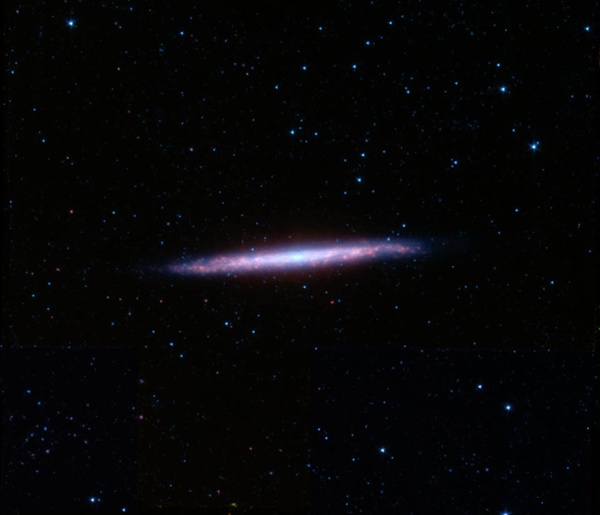 The supermassive black holes found at the centers of galaxies are known for their extreme X-ray emission. This emission is associated with the massive hot disks of gas and debris that circle these monstrous black holes before it is consumed.

However, X-ray observations of distant galaxies have also uncovered additional luminous X-ray sources that aren’t associated with the galactic centers (where supermassive black holes are found). These are ULXs, or ultraluminous X-ray sources. ULXs have been traditionally explained as large stellar-sized (80-100 solar masses) or possibly intermediate mass (1,000-100,000 solar masses) black holes accreting material at high rates. Now, one famous ULX has been identified not as a black hole, but as a neutron star with a mass less than 1.5 that of our Sun, exhibiting a complex and powerful magnetic field.

Gian Luca Israel, a researcher at the Italian National Institute for Astrophysics, and his colleagues used observations from the X-ray Multi-Mirror Mission (XMM-Newton) and Nuclear Spectroscopic Telescope Array (NuSTAR) space telescopes to delve deeper into the inner workings of ULX-1 in NGC 5907, a ULX located 40 million light-years away in the edge-on spiral galaxy NGC 5907, often called the Knife Edge or Splinter Galaxy.

Within these observations, Israel and his team identified periodic variations in the X-rays coming from this object, which they’ve now identified as a pulsar (a spinning neutron star). Furthermore, this pulsar is accreting material at such high rates that it’s spinning up, dramatically increasing the speed at which it rotates around its axis. They measured the pulsar’s period as 1.43 seconds in 2003, while observations made in 2014 clocked the pulsar at a faster rotation rate of 1.13 seconds. In a video accompanying the announcement, Israel compared this speed-up to the Earth’s day growing shorter by 5 hours in just 11 years.

Why is this determination so incredible? The luminosity of a black hole (or any stellar-type object) is limited by physics. Because photons can actually exert pressure on their surroundings, photons above a certain energy would overpower the force of gravity exerted by the mass of the star or black hole, disrupting an accretion disk and essentially turning off the source of its X-rays. This energy limit is called the Eddington limit, and it’s dependent on the mass of an object, and larger objects have larger Eddington limits. ULXs are objects that aren’t supermassive black holes, but are seen exceeding this Eddington limit for neutron stars and even “normal” stellar-sized black holes. The fact that they’re radiating above this limit, then, is a conundrum.

However, there is a catch to this argument. The Eddington limit assumes that an object is radiating isotropically — in all directions. But pulsars are neutron stars that emit from only a very small area, beaming their intense radiation out into space in coherent beams like a lighthouse. These observations of periodicity in the X-ray emission and the determination that ULX-1 is a neutron star with a multipole magnetic field help to explain why this object’s radiation exceeds the accepted Eddington limit of a neutron star by 1,000 times. Such a beaming effect would lower the true intrinsic luminosity of the source, and thus its mass, making the explanation of at least some ULXs as neutron stars within the realm of possibility.