Think you could survive this? Photo ©Joanne Fraser/Ocean Artworks LLC

Sharks are pretty incredible animals. They’ve lived on this planet for more than 400 million years, and in that time, come to dominate the oceans they inhabit. That kind of survival when so many other lineages have gone extinct requires serious resilience. Now, a lemon shark off Florida has shown off just how tough these animals can be: he survived for at least 435 days with a hole in his body created as he shoved a swallowed fishing implement out of him through his flesh.

The shark was first spotted in December of 2014 by Joanne Fraser and her colleagues when they were diving at a popular Florida tourist site. She saw the large male lemon shark with a small metal object protruding from his right side, and smartly chose to photograph him and his odd body jewelry. 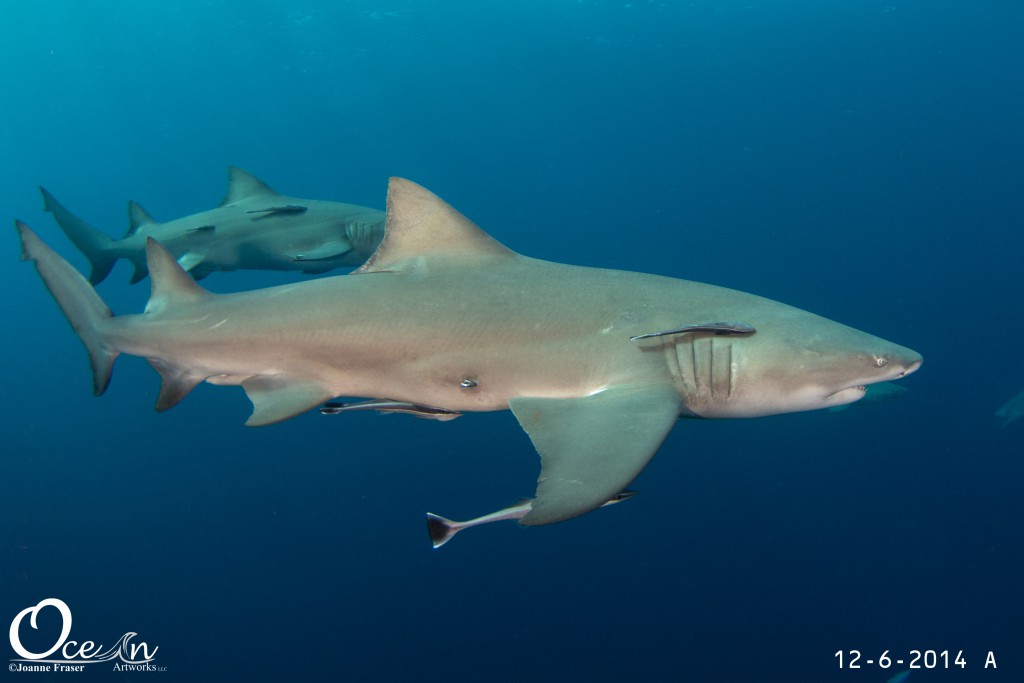 A weird location for a piercing… The first sighting of the shark. Photo ©Joanne Fraser/Ocean Artworks LLC

A regular at the dive site, Fraser continue to see the animal return on multiple occasions, and took photos and videos each time. Amazed by what she saw, she contacted a shark scientist she had worked with in the past—Steven Kessel, Director of Marine Research for the Daniel P. Haerther Center for Conservation and Research at the Shedd Aquarium in Chicago—and told him all about her observations. Kessel jumped at the opportunity to document the event, which has recently been published in the journal Marine and Freshwater Research. “She was savvy enough to take repeated photographs and video of this individual, which let us have a very nice time series account of this shark expelling this object… something that I don’t really think has been captured before.” 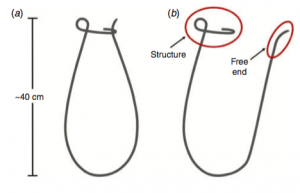 A diagram of a fish stringer, both closed and open, with the red circles indicating the parts seen protruding from the shark. Figure 2 from Kessel et al. 2017

Over the next two years, the shark was observed on 12 different occasions, and each time, the object had moved. It quickly became clear that the shark had swallowed a fish stringer—a metal loop used by spearfishermen to hang fish on a line while they continue hunting—and it was now poking out through the shark’s skin and muscle from the shark’s stomach. It would be difficult to manually shove a stringer into a shark from the outside thanks to the animals’ tough skin, and stringers aren’t shot as projectiles, so it’s unlikely the stringer entered the shark from the outside. The obvious conclusion was that the shark snacked on a speared fish, ingesting the steel object now protruding from its gut by accident while it consumed its otherwise easy meal.

When most animals ingest something unpalatable, it exit their bodies through one of two ways: out the normal digestive route, or back the way it came in. Some sharks are known to evert their stomachs to eject unwanted contents (their version of vomiting). But in this case—perhaps because the stringer pierced the shark’s stomach lining—both natural passage through the bowels and stomach eversion didn’t occur. Instead, the shark literally shoved the stringer through its body to expel it.

As time went on, Fraser watched the metal go from barely peeking through to protruding from both the right side and the underside of the shark. Then, finally, more than two years later, the stringer was gone. Based on the dates of the observations, the team concluded that the shark had lived for more than 435 days with a hole through its body—”through the stomach wall, the body cavity, and out through the body wall,” said Kessel.

Wounds that extend deep into the body tend to be especially dangerous because they leave an individual vulnerable to any of the myriad of microbes present in their environment.”You don’t want anything getting into the body cavity and around the organs that can create infections,” said Kessel. People that undergo surgeries, for example, must be vigilant, and let a doctor know if they experience any symptoms of infection, as direct infection of the insides by bacteria can lead to life-threatening sepsis. In addition to the possibilities of infection from seawater entering the shark’s insides, Kessel also believes it’s likely that further damage occurred internally, especially to the animal’s liver. “I think most terrestrial animals would struggle to survive anything like this,” said Kessel.

Of course, this was no land animal. “It appears that sharks are very tolerant of salt water entering their body cavity,” explained Bill Van Bonn, Vice President of Animal Health at Shedd Aquarium. Veterinarians that work with these animals regularly utilize holes through the animal’s skin—called “coelomic pores”—to collect clinical samples or examine their insides with endoscopes. These pores presumably allow small amounts of seawater in as well. Van Bonn even recounted one case where a shark underwent an emergency ‘cesarean section’ to deliver her pups, a procedure which certainly introduced “a fair amount of salt water” as it was being performed. “That shark recovered just fine.”

Sharks are also known to heal remarkably, at least from external wounds. “It’s long been established that sharks have very phenomenal abilities for recovery and tissue regeneration,” said Kessel. This makes sense, Kessel explained, because shark mating is a particularly brutal ordeal, where the male will bite and hold onto the female with his razor sharp teeth. “If you see female sharks after mating, it can be quite gruesome in terms of the extent of the wounds and injuries.” There are also notable cases of sharks with extensive wounding and healing, including “Prop”, a white shark that survived being nearly cut in half by a boat propeller.

It has long been thought that sharks might be able to recover from similarly devastating internal injuries, which makes sense, said Kessel, as “sharks tend to eat things that are quite sharp.” Some of their meals, including pufferfishes and sting rays, can cause serious trauma (both before and after being consumed). Yet, there has been scant evidence backing this hypothesis.

Our scars remind us that the past is reeeeal. Figure 4 from Kessel et al. 2017; Photos ©Joanne Fraser/Ocean Artworks LLC

Whatever seawater entered through his wound, and in spite of the extent of his injuries—including any beyond the obvious tear through his stomach, muscle, and skin—this shark clearly healed well. He didn’t seem worse for the wear when he was sighted in late 2016. Though he appeared skinny the year before (according to shark scientists that examined the footage), he had regained weight and seemed healthy as ever when he was sighted again on December 14. Only a pair of scars remained on the shark’s body to tell of what he’d endured.

“If you speak to any shark scientist or anyone who is around sharks a lot, they’ve probably seen similar things where sharks have been seen with objects protruding,” said Kessel, “but I don’t think anyone’s ever seen an account like this where it’s been documented over such a long period of time, and they’ve actually seen the individual afterwards, still in relatively good condition.”At least, he said, any such sightings have not been reported in the scientific literature.

This report not only adds to our growing understanding of sharks’ remarkable healing abilities, it also bolsters support for one side of a long standing debate amongst shark fishermen and scientists. When sharks are snagged accidentally or in catch-and-release fishing, the animal sometimes is “deep-hooked,” where the hook lodges past the mouth, even in the stomach (“gut-hooked”). At that point, the fisherman has a choice: attempt to remove the hook, or cut the line as short as possible and let the animal go. Some believe that a deep-hooked fish will simply die, so the only course of action is to dig around and try to get the darned thing out. But this observation adds to a slim but growing body of evidence that fish and sharks are able to survive with foreign objects in their flesh, and indeed, may even find ways to expel them that we never would have imagined.
Citation: Kessel et al. 2017. Transcoelomic expulsion of an ingested foreign object by a carcharhinid shark. Marine and Freshwater Research; doi: 10.1071/MF17022