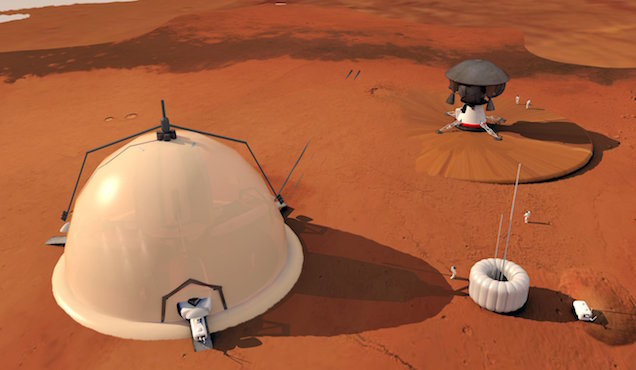 An artist’s illustration of the proposed Mars base. (Credit: Claudio Leonardi/EPFL)

The idea of building a base to colonize Mars and become an interplanetary species has seen decades of talk and not a whole lot of action, but now at least there’s plan.

On September 10, researchers from the École polytechnique fédérale de Lausanne (EPFL), a Switzerland university and research center, laid out a step-by-step guide to creating a sustainable research facility on Mars. Their specific plan outlines how we would get there, set up camp and create an environment that would be habitable in the long term. By adopting this strategy, researchers could finally start planning humanity’s long-awaited trip to the Red Planet.

But as with any major project, it would take years to come to fruition, so coming up with a strategy now might pave the way for its completion in the next few decades.

The first step to building a colony, of course, is to figure out where you’ll have the best chance of survival. For Mars, the researchers set their sights on the planet’s poles, which contain ice deposits that have built up over many thousands of years. These deposits are thought to contain large amounts of water ice, which could potentially be extracted and turned into liquid water.

The poles also harbor other natural resources, like carbon dioxide, iron, aluminum, silicon and sulfur, which could be used to make things like glass, brick and plastic. And with a little work, they could even use the planet’s hydrogen and methanol to create fuel.

However, neither these resources nor a suitable living environment will be available straight away, so instead of savagely sending humans on the first mission, the researchers suggest sending a fleet of robots to start constructing the facility.

The base that they designed consists of three units: a central core, three surrounding capsules and a massive over-arching dome. The central core would stretch 41 feet (12.5 meters) high and 16 feet (5 meters) in diameter, and would serve as a small but sufficient living quarters for the crew.

The three capsules surrounding the central core would function as airlocks — passages that connect the core and the Martian surface and minimize changes in air pressure between the two. And finally, an enormous polyethylene fiber dome, topped with 16 feet (5 meters) of ice, would encapsulate the entire based. On top of giving the crew some extra legroom, the dome would serve as a giant radiation shield and help further regulate air pressure.

Once the robots have scoped out the site and created a safe place for humans, a six-person crew would start their journey to the Red Planet. This would ideally take place during the polar summer, when the crew could soak up 288 straight days of Martian sunlight. They would obviously need to pack lots of essentials to get them through the long summer, like non-perishable food, batteries, and reactors that can turn Mars’ natural elements, like thorium, into power.

And after living on the base for about nine months, the crew would make their way back home — marking the first round-trip, crewed-mission to Mars. 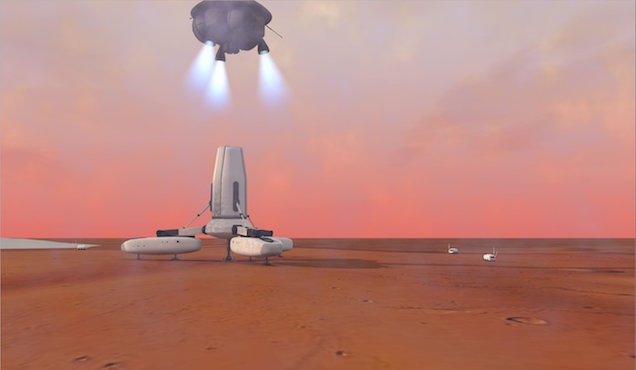 But the innovation doesn’t stop there. The second mission would bring along a system of cranes, designed to orbit the planet and transport material from space shuttles to the research base. Each re-usable crane would be able to unload equipment from six different missions, streamlining colonization and alleviating a lot of legwork for the crew.

The plan to build a research base on Mars sounds pretty perfect on paper, but it isn’t without its setbacks. About 110 metrics tons of equipment are needed to construct such a base, and we currently don’t have rockets capable of carrying such heavy loads. And since it’s such a massive project, there’s bound to be unforeseen roadblocks that could halt or severely delay the plan. But regardless, having a detailed strategy is a push in the right direction, and is far better than sitting around, dreaming of Martian life.

For more details on EPFL’s plan, keep an eye out for the upcoming release of their full research paper in Acta Astronautica.