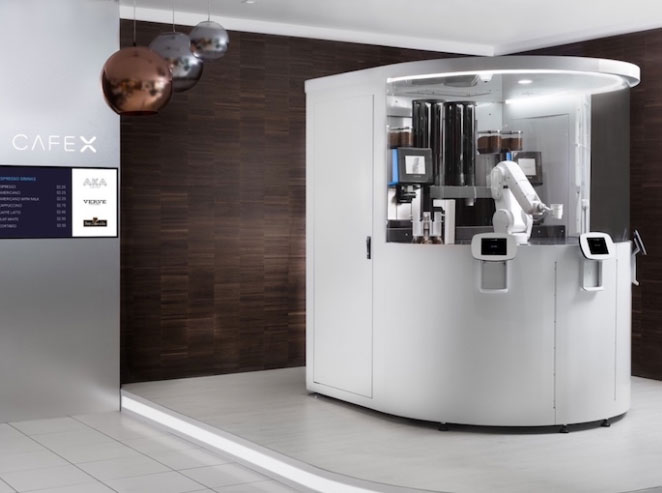 A robo-rista is now optimizing customers’ coffee in the United States.

The “barista bots,” which are actually robotic-arms designed by Mitsubishi, are the first of their kind in the United States, joined only by their sisters-in-arms serving hot brew in kiosks in Hong Kong. They may not be chatty, but they definitely know how to make your favorite latte just right.

Eight-ounce beverages can be ordered either in-person using the kiosk’s iPad menus or directly from a phone via the Café X mobile app. For now, they’re keeping things simple with just seven selections to choose from – all starting at $2.25.

Running late? Café X will remake your drink if it sits for more than eight minutes – and when you come to pick it up, the piping-hot redo will be free of charge.

The drinks also come with a cornucopia of customization options. For starters, customers will get to select the beans for their brew – with providers like Peet’s, Verge and Oakland-based Aka, to name a few. There’s also a wealth of flavor add-ons including organic milk, sugar, spices and a variety of syrups.

Concerns have bubbled up from those who fear the proliferation of “robo-cafes” will lead to the extinction of our beloved local coffee shops. Café X founder and CEO Henry Hu affirmed that this is not at all his goal.

“This won’t replace baristas or the coffee shop experience that so many people have come to love—we don’t aim to do that. What we’re offering is the best possible experience for people who are looking for consistent specialty coffee to-go,” Hu said recently in a statement.

Hu aims to have Café X baristas installed in local offices, civic centers and airports within the year. And hey, at least we know they won’t spell our names wrong.