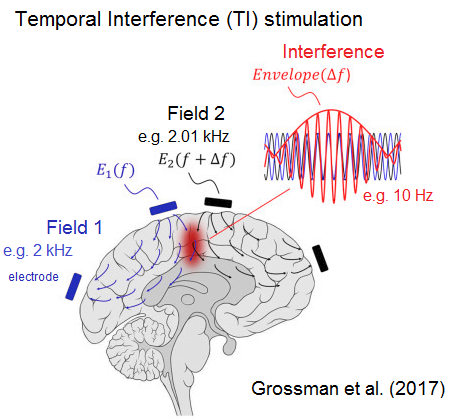 A high-profile paper in Cell reports on a new brain stimulation method that’s got many neuroscientists excited. The new technique, called temporal interference (TI) stimulation, is said to be able to reach structures deep inside the brain, using nothing more than scalp electrodes.

Currently, the only way to stimulate deep brain structures is by implanting electrodes (wires) into the brain – which is an expensive and potentially dangerous surgical procedure. TI promises to make deep brain stimulation an everyday, non-invasive tool. But will it really work?

The paper comes from Nir Grossman et al. from the lab of Edward S. Boyden at MIT. Their technique is based around applying two electrical fields to the subject’s head. Each field is applied using two scalp electrodes.

It is the interaction between the two fields that creates brain stimulation. Both fields oscillate at slightly different frequencies, for instance 2 kHz and 2.01 kHz. Where these fields overlap, a pattern of interference is created which oscillates with an ‘envelope’ at a much lower frequency, say 10 Hz. The frequency of the two fields is too high to have any effect on neural activity, but the interference pattern does have an effect.

Crucially, while the electric fields are strongest close to the electrodes, the interference pattern is most intense at a remote point – which could be deep in the brain. Here’s an overview:

Grossman et al. present a lot of evidence validating the TI concept and showing that it does allow selective, deep-brain stimulation – in mouse brains. The most striking data comes from an experiment in which Grossman et al. used TI to stimulate the hippocampus of mice without stimulating the cerebral cortex. This is remarkable because the hippocampus is deep in the brain, and far from the electrodes: 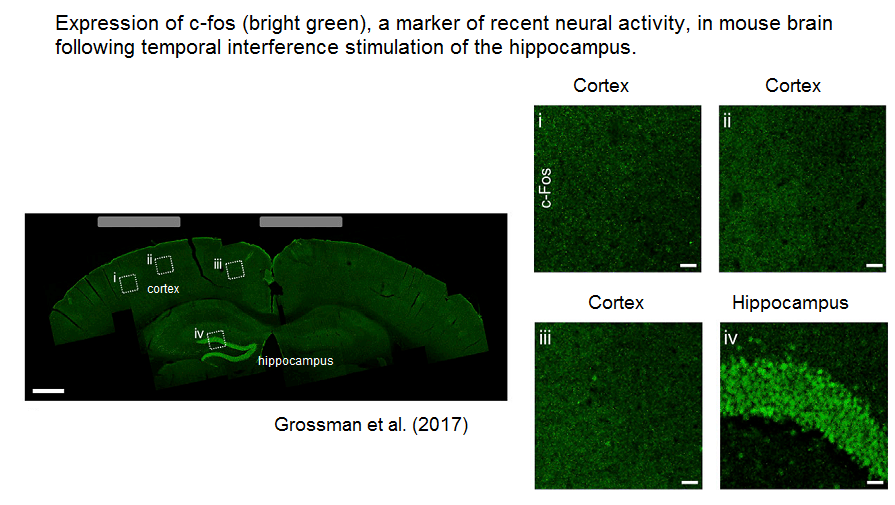 What’s more, TI stimulation is “steerable”. By varying the strength of the two electrical fields, Grossman et al. were able to move the stimulation zone. This holds out the exciting possibility that neuroscientists could easily stimulate different brain regions, without having to implant an electrode in each one.

There’s no doubt that this is one of the most exciting neuroscience papers to come along in a long time. It’s a cliché, but TI really could revolutionize neuroscience, as well as having clinical applications in the treatment of disorders such as Parkinson’s disease and more.

But will it work in humans? Grossman et al. imply that it will:

We anticipate that it might rapidly be deployable into human clinical trials, as well as studies of the human brain.

Grossman et al. seem so confident about the human applications of TI, they used a human brain in their ‘graphical abstract’ (reproduced above) even though only mouse brains appear in the paper.

There’s one obvious snag though: scale. The human brain is much bigger than the mouse brain. When Grossman et al. achieved “deep” stimulation of the mouse hippocampus, the hippocampus was about 3 millimeters away from the electrodes. In humans, the depth would be about ten times as high.

Presumably, it would be possible to compensate for the increased distances by using stronger electrical fields in humans, but this might create safety issues. Boyden and his group are reportedly working on human studies at the moment.

Finally: how new is the idea of TI? Grossman et al. don’t cite any previous literature on the method. This lead me to assume, when I read the paper, that the idea of deep stimulation via two interfering electrical fields was a new one.

However, I learned on Twitter that it’s not a new concept. “Interferential Stimulation” (IS) was reportedly first proposed by Soviet scientists as early as 1965, and has since become an established tool in electrotherapy, i.e. the use of electrical stimulation on the nerves to treat pain. Here’s a 1996 patent (one of many) for an Interferential stimulator for applying localized electrotherapy stimulation.

As far as I can see, Grossman et al. are the first people to use interferential stimulation in the brain, but they didn’t originate the technique itself.