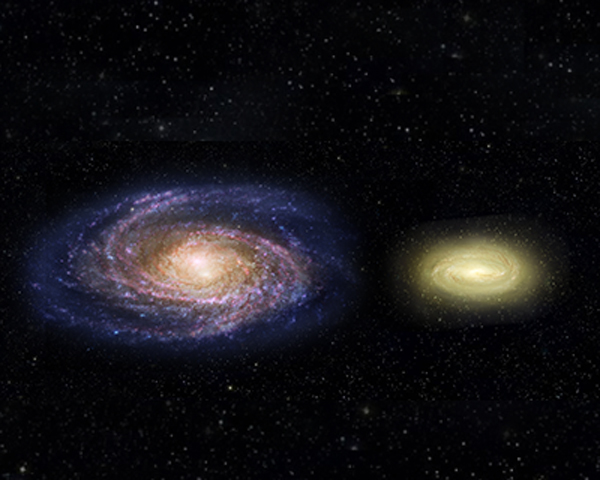 This artist’s concept shows the Milky Way and MACS 2129-1 side by side. MACS 2129-1 is only half the Milky Way’s size, but it’s three times as massive as our home galaxy. (Credit: NASA/ESA/Z.Levy/STScl)

Objects in the distant universe appear small and difficult to see – unless they’re sitting behind a cosmic magnifying glass.

That’s exactly the case for MACS 2129-1, a galaxy lensed by a massive foreground galaxy cluster. Using the Hubble Space Telescope, astronomers have managed to catch a glimpse of this unusual object, which appears to be an old, “dead” galaxy that’s already stopped making new stars just a few billion years after the Big Bang. Not only is this galaxy finished with its star formation earlier than expected, it’s also shaped like a disk, rather than the fuzzy ball of stars that astronomers assumed they’d see.

The results, which were published Thursday in the journal Nature, describe a galaxy half the size of the Milky Way, but three times as massive. Its compact disk of old, red stars is spinning rapidly, over two times the speed of the stars orbiting the center of our own galaxy. Astronomers were able to spot it via a phenomenon called gravitational lensing, which occurs when a massive object, such as a galaxy cluster, bends the light from a distant object as it travels to Earth, magnifying the image we see on the sky. This allows researchers to probe very early epochs of the universe that are otherwise unresolvable with today’s current instruments.

Based on archival data from the Cluster Lensing And Supernova survey with Hubble (CLASH), the team that discovered the galaxy was able to measure the ages of its stars, its total stellar mass and its rate of star formation.

What they found was puzzling.

In our current picture of galaxy formation, disk-shaped galaxies (like our own Milky Way) in the early universe make stars throughout their youth, appearing blue with bright, young stars before evolving into “red and dead” elliptical galaxies in our local universe. This transition is largely thought to occur through mergers, which randomize the orbits of the stars in the resulting galaxy, transforming it from an ordered disk into an elliptical shape. Thus, older, more massive galaxies should be elliptical balls of stars, not coherent disks.

So as a disk galaxy in the early universe that’s evolved past its star-forming phase into the dead phase without mergers, MACS 2129-1 challenges that picture.

“This new insight may force us to rethink the whole cosmological context of how galaxies burn out early on and evolve into local elliptical-shaped galaxies,” said lead researcher Sune Toft of the Dark Cosmology Center at the Niels Bohr Institute, University of Copenhagen, in a press release.

What could have caused this galaxy to burn out so early while retaining its disk shape? The exact cause is unknown, but some of the most likely possibilities include an active central supermassive black hole or streams of cold gas flowing into the galaxy, either of which could prevent new stars from being born.

For now, MACS 2129-1 is the only galaxy of its kind that doesn’t fit the mold. But that could arise from the fact that astronomers have long assumed that distant dead galaxies look like their local universe counterparts. Because these distant galaxies are hard to see without serendipitous events like the lensing phenomenon that brought MACS 2129-1 to astronomers’ attention, those assumptions could be incorrect.

“Perhaps we have been blind to the fact that early ‘dead’ galaxies could in fact be disks, simply because we haven’t been able to resolve them,” said Toft.

Toft’s team hopes that with the launch of the James Webb Space Telescope, they’ll gain a more powerful tool to see such faraway, hard-to-resolve objects without relying solely on lensing. A larger sample of galaxies like MACS 2129-1 would tell astronomers whether their ideas about galaxy formation and evolution need updating, as well as provide clues as to the reason these galaxies have stopped forming stars so abruptly.