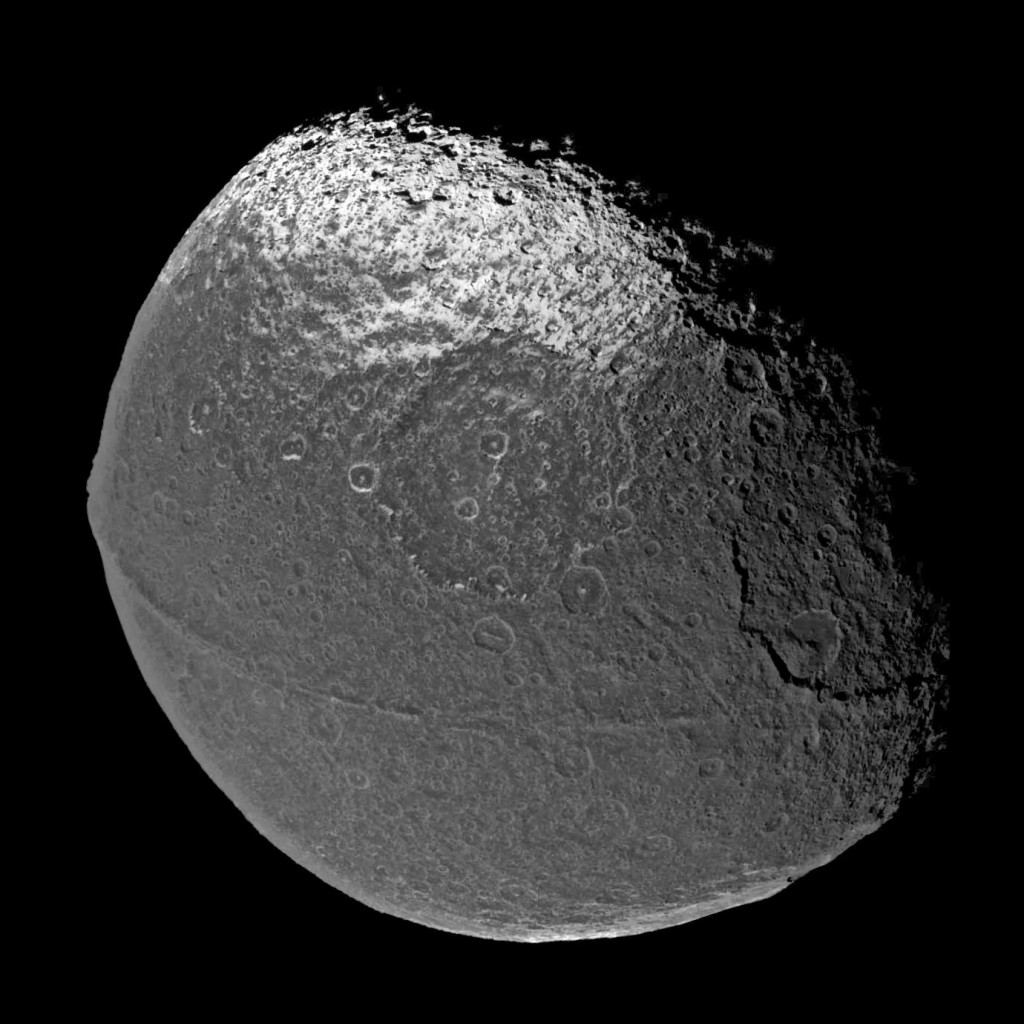 The mountain ridge on Iapetus has been a mystery since 2004. New simulations suggest it formed from rocky debris falling at shallow angles, which would allow for material to move down range and clump up into a continuous mountain range. (Credit: NASA/JPL/Space Science Institute)

Moons in the solar system come in many different forms. Some are boulder-sized, while one is larger than the planet Mercury. Some are mixtures of rock and iron, while others hide oceans and rocky cores under icy surfaces. Two even look a bit like walnuts, each hosting a bulge of material around its equator. Interestingly, both of these, Iapetus and Pan, orbit Saturn. And had I written this post a month ago, “two” would have been “one.” Scientists discovered March 8 that Saturn’s tiny satellite Pan has a ridge. But the other walnut-shaped moon, Impetus, has puzzled scientists for centuries.

The first astronomers who observed Iapetus couldn’t make out the mountain range ringing three-quarters of the moon’s equator. But they could see that one side is brighter than the other side, so the surface material on those faces must differ. (One side is much more reflective than the other.)

The first hints that Iapetus has mountains ringing its equator came when the Voyager 2 spacecraft flew by Saturn and its moons in 1981. Scientists saw that near the equator were several “aligned” mountain peaks. Curious. It wasn’t until December 2004, when the Cassini spacecraft flew by Iapetus, that astronomers identified those aligned peaks were part of a 870-mile-long (1400 kilometers) chain of mountains, reaching close to 12 miles (20km) tall. And that discovery was even more curious than a few mountains lined-up, because what could create that global feature?

Some researchers think a process internal to the moon, like its rotation, could have generated this ridge. But other scientists argue these internal models are too constraining, too specific to only Iapetus and requiring very precise scenarios to occur. Perhaps instead, the ridge is a result of something external, like a disk of material surrounding the moon falling onto the satellite’s equator. After all, surrounding disks aren’t uncommon (all four of the solar system’s giant planets have rings).

Last week at the annual Lunar and Planetary Science Conference outside of Houston, Texas, Johns Hopkins University Applied Physics Laboratory’s Angela Stickle presented her and colleague James Roberts’ work building off the idea of a disk creating the mountain range. When that disk’s material fell from the sky onto Iapetus, it wouldn’t just rest softly on the moon. But it also doesn’t create only a hole. Instead, each piece of debris would alter the surface, digging out material and creating some type of impact crater that depends on the angle and speed at which the rock hits the surface, the size of the rock, its composition, and the moon’s surface composition. Energy from the impact travels deeper into the terrain, uplifting layers of material. And sometimes some of the impactor itself survives the collision, specifically if the impact hit at a shallow angle. 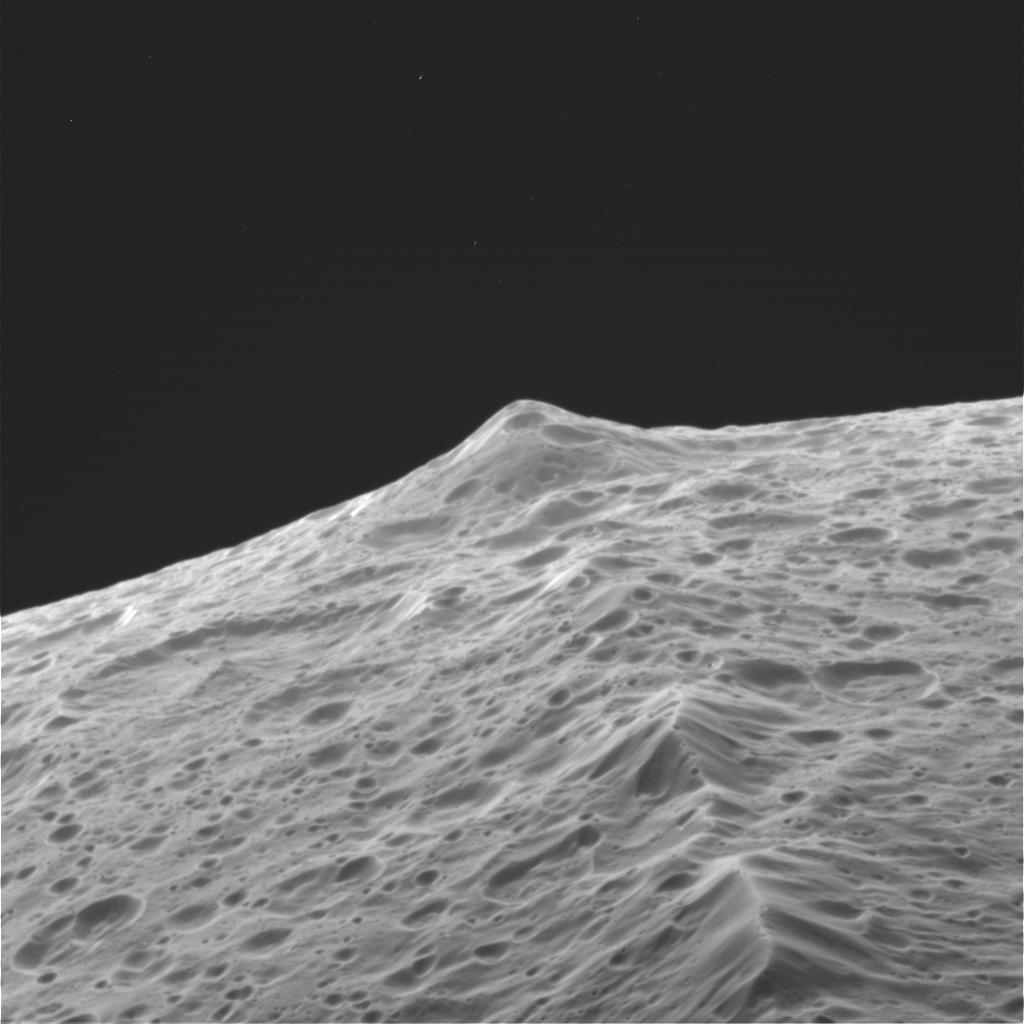 The mountains along Iapetus’ equator reach heights of up to 12 miles (20 kilometers). (Credit: NASA/JPL/Space Science Institute)

A disk of debris wouldn’t fall onto the surface as if gravity just turned off. It would spiral down and collapse toward the surface, until finally each rock hits the moon with a glancing blow. To study that type of collision, Stickle and Roberts simulated space rocks impacting an icy, rocky surface at shallow angles — one rock first, then two, and then several in succession. They looked at impactors between 3.2 feet (1m) and 0.6 mile (1km) wide and colliding at the surface with angles of 1 degree, 3 degrees, and 10 degrees from parallel.

When the meteoroids hit the surface at those shallow angles, some of each meteoroid would shear itself off and move down range from the impact site. (Planetary scientists call that shearing process “decapitation.”) The scientists found that if you have a bunch of these rocks, their sheared material clumps together and they pile up — “like a traffic jam,” Stickle said during the presentation. Their simulations showed that if Iapetus had a disk of material, that disk as it fell to the moon’s surface could have created the mountain range. What created the disk, though, is yet another mystery.