Did Boys Use To Wear Pink? Revisited 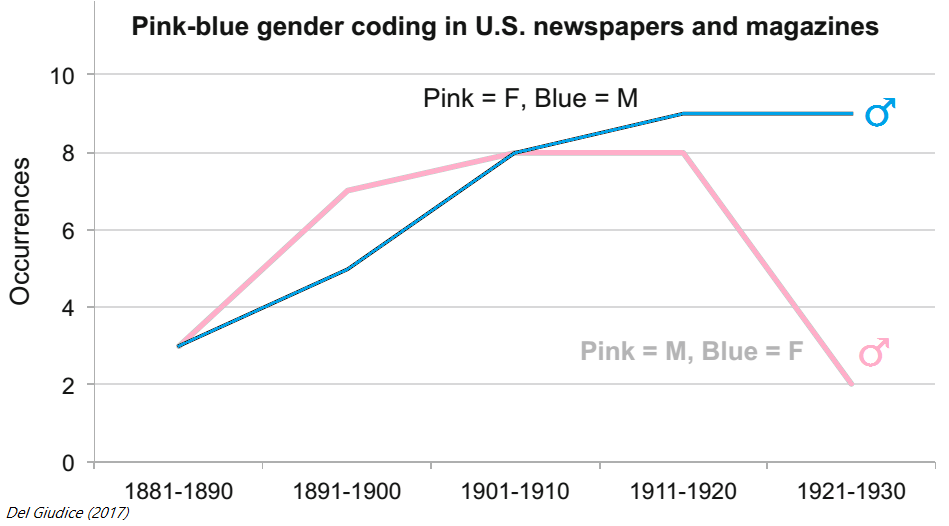 Five years ago I blogged about the debate over whether the blue-for-boys, pink-for-girls color convention used to be the other way around. My post focused on a 2012 paper by psychologist Marco Del Giudice arguing that the idea of a cultural “pink–blue reversal” in the English-speaking world in the early 20th century is a myth.

Now, Del Giudice has published an ‘update’ revisiting the issue. Based on text data from late 19th and early 20th century American newspapers and magazines, Del Giudice says that there’s still no evidence that pink-for-boys, blue-for-girls was ever the dominant pattern.

Del Giudice admits however that the periodicals do reveal that in the period before 1920, both blue-for-boys, pink-for-girls and the reverse scheme were mentioned, roughly equally often. In other words, the genders of these colors were inconsistent before this point.

However, American books from the same period (and afterwards) overwhelmingly mentioned blue-for-boys, pink-for-girls. There were negligible mentions of the reverse scheme. 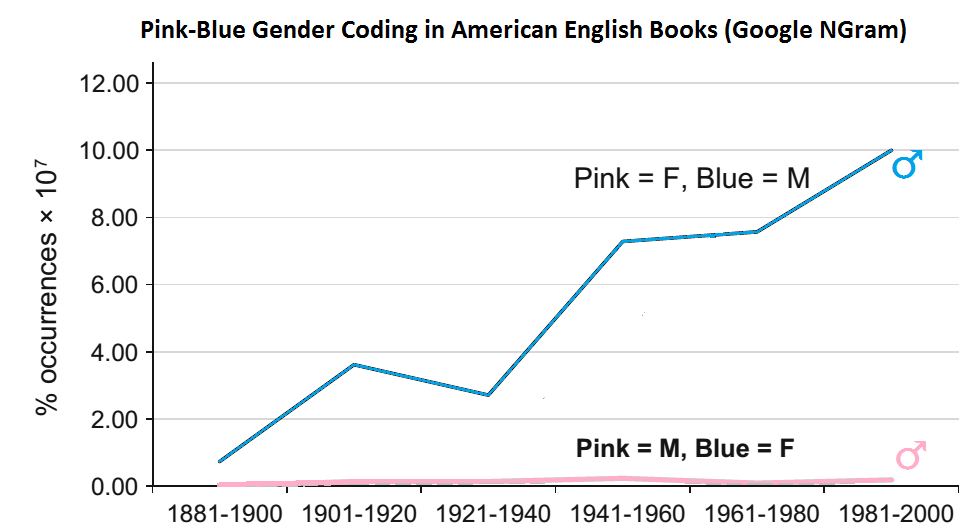 British books showed a similar pattern. Del Giudice says that he’s not sure how to interpret this discrepancy between books and newspapers/magazines. I wonder if it reflects differences in the demographics of periodical vs. book authors during this period?

Del Giudice concludes that overall, there is still no evidence for a “pink–blue reversal”, although the situation before 1920 may have been somewhat complex. This seems sensible to me.

I find it harder to follow Del Giudice however in the second half of the new paper, where he discusses possible evolutionary explanations why females would prefer pink. This seems like a just-so story to me, taking a historically contingent “meme” and working backwards from it to biology:

The color red is implicated in sexual choice in many animal species; in humans, skin redness is a cue of health and attractiveness and – intriguingly – has a sexually dimorphic distribution, with men showing higher average levels of redness than women… This raises the possibility that women may be more sensitive than men to skin redness in potential sexual partners…

The skin of newborns and infants also shows elevated redness compared with that of adults and takes a pink coloration in areas that are especially rich in capillary loops (e.g.,cheeks). Preferences for red and pink may be partly linked to female preferences for babies.