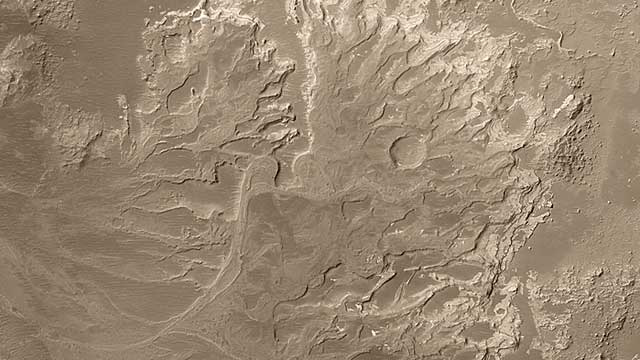 Features on Mars like this one, a likely river delta deposit, point to a warmer ancient past. (Image: NASA/JPL)

Climate change on Earth is a well-established phenomenon, but scientists have long struggled to explain an even more dramatic change of conditions, long ago in a far-off land.

Mars is a dry, frigid planet today, with an average ground temperature of about -60 °C. Liquid water seems to be possible only under a narrow range of circumstances, but for the most part, water sublimates directly from solid ice to gaseous water vapor. And yet, features on the surface of Mars tell a very different story. Dramatic river channels and canyons indicate that vast quantities of water once flowed from the southern highlands to northern plains.

Clearly, Mars must have been warmer to allow all of this liquid water to persist on its surface. But how were such distinct conditions created? What was different about the planet billions of years ago?

Several options have been proposed over the years. Perhaps heavy clouds of carbon dioxide or sulfur dioxide spewed from volcanoes trapped enough heat in the atmosphere? Maybe changing orbital cycles melted ice and caused massive, landscape-gouging floods? Could hydrogen or ammonia in the atmosphere have done the trick? No, no, and no, according to a number of scientific studies over the years: all of these scenarios have disqualifying flaws.

But a new proposal may have cracked the case, and it relies on a physics parlor trick called collision induced absorption. Atmospheric gases trap heat by absorbing incoming (from the Sun) and outgoing (from the planet’s surface) radiation at certain wavelengths; the activated molecules then vibrate faster and re-radiate some of the energy, transferring heat throughout the atmosphere. While individual gas molecules account for much of this “greenhouse effect” – key players like carbon dioxide and methane are well known – interacting gas molecules contribute an additional dimension of absorption that is frequently overlooked.

The recent study, led by Robin Wordsworth, an assistant professor of environmental science and engineering at Harvard University, focuses on the heat absorption that occurs when two pairs of molecules collide: CO2 & H2, and CO2 & CH4. He and his colleagues found that CO2 is the key player – its oxygen atoms pull electrons away from carbon, and this distributed field of electron density creates a wider array of absorptive states, enhancing the heat-trapping properties of colliding molecules.

CO2, which is abundant in the martian atmosphere, absorbs energy most effectively at wavenumbers around 700 cm-1; the CO2–H2, and CO2–CH4 pairs fill a conspicuous gap, absorbing relatively well between 250-500 cm-1.

With the fundamental physics in hand, Wordsworth was able to tweak modeled compositions of the ancient martian atmosphere to see what was needed to get the temperature above water’s freezing point and enable flowing rivers. Assuming a thick, 1.5-bar atmosphere of carbon dioxide, just 3.5% each of CH4 and H2 would do the trick.

This doesn’t seem like a tall order, but today’s CH4 and H2 concentrations on Mars are miniscule, so where could these key ingredients have come from? The researchers propose volcanic emissions or input from meteorites, as well as reactions between water and volcanic rock that are known, on Earth, to generate both molecules.

Viewing atmospheric molecules not as independent actors, but as a dynamic milieu whose interactions could dramatically change a planet’s thermal history, is an important conceptual shift that could substantially expand the search for life beyond Earth.