As wildfires explode across the western U.S., satellites above spy the giant smoke plumes — and bloviating partisans below politicize what&#039;s happening 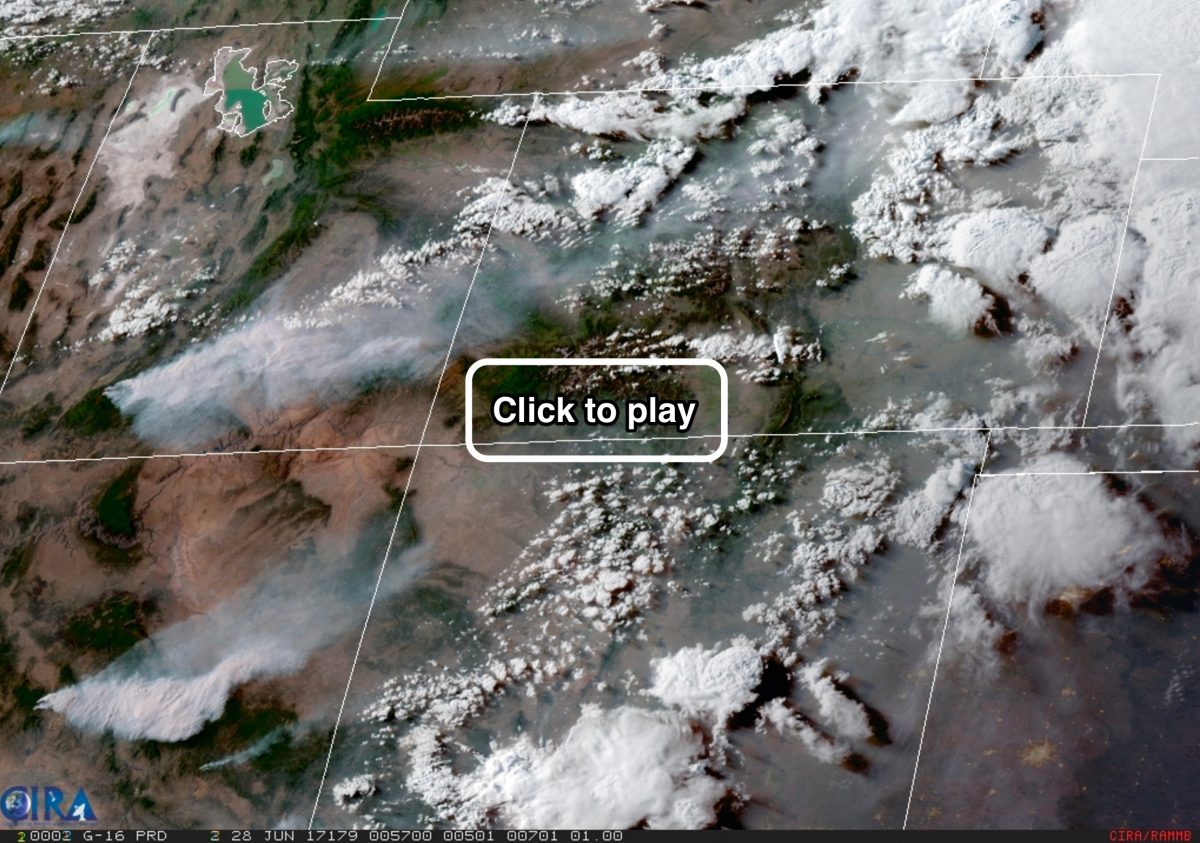 In blaming western wildfires on environmentalists and the Forest Service, politicians are ignoring science — and putting people at risk

Giant smoke plumes from wildfires blazing in Utah and Arizona were easily visible to the GOES-16 weather satellite on June 27th, 2017. The Brian Head fire is to the north, in Utah. The Goodwin Fire near Prescott, Arizona is to the south. A much smaller plume can also be seen growing in Arizona. (Source: RAMMB/CIRA/NOAA)

Thanks to hot, dry and windy conditions, new wildfires have exploded across the western United States in the last few days, forcing thousands of people to evacuate their homes and flee from encroaching flames.

As of Thursday, June 29th, 29 large wildfires were blazing in ten states, 28 of them in the West, according to the National Interagency Fire Center. The flames have spread across 207,345 acres — an area larger than the City of New York. More than 8,400 firefighters and support personnel are involved in battling the blazes. (For the latest update from the fire center, go here.)

The largest is the Brian Head Fire in southern Utah. At 58,319 acres as of Thursday, it had grown to more than a third the size of Chicago. Although firefighters have slowed its advance, by Thursday evening it was only 15 percent contained.

The Brian Head Fire is the northerly one visible in the incredible animation above of GOES-16 weather satellite images. The more southerly smoke plume is coming from the Goodwin Fire near Prescott, Arizona.

The GOES-16 weather satellite captured this view of multiple wildfires burning in the West on Thursday, June 29, 2017. (Source: RAMMB/CIRA/NOAA)

I’ve circled all the smoke plumes I could find, based on their slightly bluish color. Regular clouds are much whiter.

As I wrote previously, thanks to fire suppression, land-use changes, and a warming, drying climate in the West, wildfires have been getting larger and more damaging.

SEE ALSO: Animation of satellite images shows smoke from the Brian Head fire drifting across much of Utah and beyond

In fact, recent research suggests human-caused climate change is having a particularly large impact. A study published last year in the Proceedings of the National Academy of Sciences found that between 1979 and 2015, human-caused climate caused a 55 percent increase in drying of the fuels that feed wildfires. This, in turn, led to a doubling in the amount of land that burned.

That means more than 16,000 square miles of forests — an area nearly the size of Florida — were added to the area of the western United States that burned since 1984.

“No matter how hard we try, the fires are going to keep getting bigger, and the reason is really clear,” said study coauthor Park Williams, a bioclimatologist at Columbia University’s Lamont-Doherty Earth Observatory, quoted in a press release. “Climate is really running the show in terms of what burns. We should be getting ready for bigger fire years than those familiar to previous generations.”

Unfortunately, rather than acknowledge reality and help plan not only for what’s coming but also for what’s already here, some politicians prefer to bloviate while exploiting misfortune for partisan gain.

Chief among them is Utah state Rep. Mike Noel, a Republican from Kanab. During a press conference about the Brian Head Fire last Monday, he said a firefighter had told him that in 28 years of battling wildfires, he had never seen one spread as quickly as this one. (Video here.)

And in what can only described as a rant, Noel placed the blame squarely on the shoulders of environmentalists and the U.S. Forest Service for preventing logging of trees killed by pine bark beetles:

Let’s put aside the fact that two of the three environmental groups he named during his rant do not even litigate timber harvests. (That’s according to this story in the Salt Lake Tribune.) Let’s also put aside the fact that logging companies generally aren’t interested in timber at the kind of high elevations that have burned in the Brian Head Fire — because its not profitable. (That’s according to Mark Finney, a researcher at the Fire Science Laboratory in Missoula, quoted in this story in the Washington Post.)

Noel’s central claim is just bunk. He and other state and county officials argue that the fire’s fierceness is attributable to large swaths of trees killed by bark beetles and then left standing because of pressure from those bunny lickers and rock lovers. (Or was it the other way around?…)  Science shows otherwise.

Research has found “weak to nonexistent links between beetle outbreaks and subsequent fire occurrence, area burned, and burn severity,” according to ecologist Brian Harvey, now at the University of Washington, writing in a review article.

For example, here’s what a study published in 2014 found about mountain pine beetles, or MPB:

Although MPB infestation and fire activity both independently increased in conjunction with recent warming, our results demonstrate that the annual area burned in the western United States has not increased in direct response to bark beetle activity.

The researchers concluded that “policy discussions should focus on societal adaptation to the effects of the underlying drivers: warmer temperatures and increased drought.”

More recently, a 2016 study found that insect outbreaks actually reduce wildfire severity. That said, a big caveat is in order here: This was just one study among many, so we probably shouldn’t put undue weight on it.

But one thing is undeniably clear: Blaming the Brian Head Fire on environmentalists and the Forest Service is not only wrong, it’s dangerous. That’s because Noel and other Utah officials who agree with him will likely fail to heed the advice of scientists: that we should be focusing on adapting to the impact of a warmer and drier climate.

This failure by politicians to accept reality puts residents of forested areas of Utah, and across the entire western United States, at risk. And that is unconscionable.