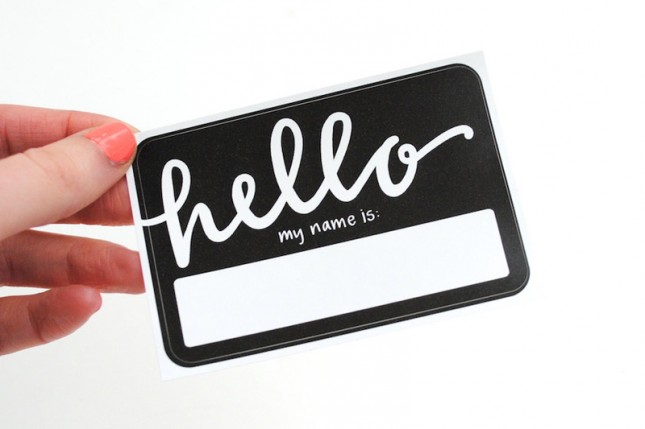 Who are you more likely to find striking a sexy pose on the cover of a magazine: Gus or Tanner? Sophia or Bertha?

It’s a silly question given all we’re working with is names, but names are powerful social tags that influence how people interact with and perceive each other—for good or for bad. A name reflects race, age, religion and nationality. A name affects the number of callbacks jobseekers receive from employers. A name can influence expectations set by a child’s teachers. A name, in many ways, affects who we ultimately become.

But there’s more: A name might also affect the face we see in the mirror.

In a battery of studies involving hundreds of participants, researchers at The Hebrew University of Jerusalem showed that people can correctly match a name to a face better than random chance. That’s because over time, according to researchers, we develop a look that reflects the associations people commonly have with our given name.

In other words, people can spot a Gus because he grows up to look like a Gus.

A Name to a Face

A face conveys trustworthiness, attractiveness and emotional states, and that’s all backed up by research showing facial appearance shape social perceptions. But Yonat Zwebner and colleagues wanted to explore if this is a two-way street: Do social perceptions shape facial appearance? If they do, we should be able to correctly identify a Gus, because his face reflects our cultural expectations of Gus-ness.

Zwebner designed 8 different experiments; six that measured how well hundreds of individuals from France and Israel could match a name to a face, and two that tested a computer’s ability to do the same thing. Participants saw a headshot, and were required to choose the correct name from a list of four. In every experiment, participants’ accuracy exceeded random chance, or 25 percent. Their computer learning algorithm, trained on 94,000 faces, correctly matched names to faces with 54 to 64 percent accuracy. 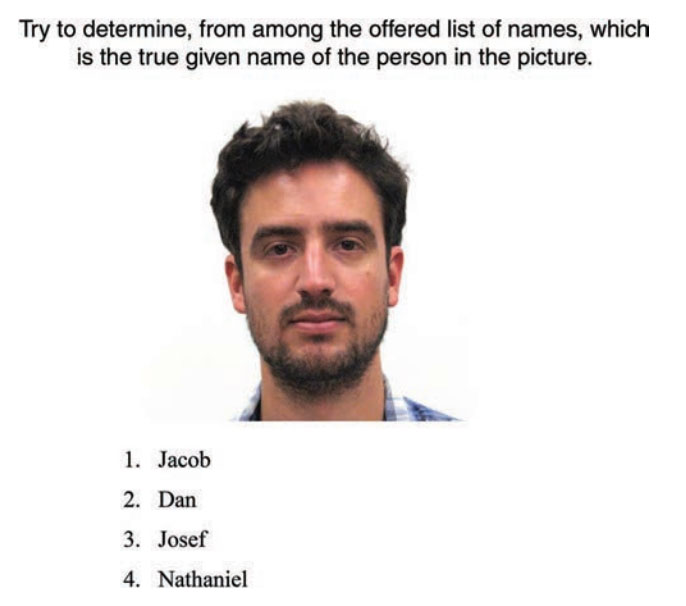 An example of a name-matching trial from researchers’ experiment. For the record, his name is Dan. (Credit: Zwebner et. al.)

But here’s where it gets interesting: In one experiment, French participants correctly matched French names and faces 40 percent of the time, but when French participants were asked to match Israeli names and faces, their accuracy dropped to 26 percent—just about chance. Similarly, Israeli participants were better at matching Hebrew names and Israeli faces than French names to French faces. This disparity, researchers say, is evidence that culture-specific stereotypes influence the characteristics we associate with a name.

In Oscar Wilde’s A Picture of Dorian Gray, the main character gave his soul to remain young, while a painted portrait of him grew old. Dorian kept his youthful physical appearance, but all of his misdeeds were manifest in that painted portrait, which grew to be hideous. In a similar sense, internal factors like our personality, emotional state and health are reflected in our physical appearance; researchers call it the Dorian Gray effect, and it works even if you aren’t trying.

Therefore, researchers say that we might internalize cultural expectations tied to our names and cultivate a look that reaffirms those expectations. This so-called face-name matching effect is sort of a self-fulfilling prophecy where people “live up to their given name,” researchers wrote. They published the results of their study Monday in the Journal of Personality and Social Psychology.

Researchers’ latest results add to findings from a 1987 study of married couples, which was perhaps the only other study, to researchers’ knowledge, that framed social interactions as drivers of physical change. In that study, researchers found that couples physically resemble each other more and more the longer they are married, a reflection of the influence each person has on the other. Couples that were more similar in appearance also reported higher levels of mutual happiness.

There are myriad factors that influence who you become—physically and mentally—and your name is just one. Further, the results of studies linking names with real-world outcomes are highly debated and many crumble under further scrutiny. We’ll see if researchers’ face-matching effect can be replicated in future studies.

Still, mothers- and fathers-to-be may want to err on the safe side and consider trendsetting names like “Well Behaved”, “Disciplined”, “Wealthy” or “Studious.”