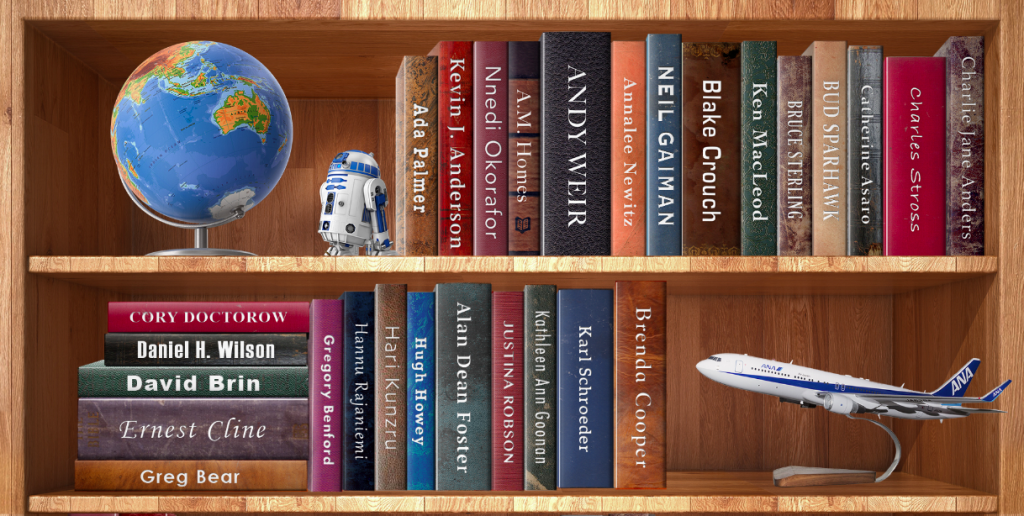 A view of the website featuring some members of the XPRIZE Foundation’s Science Fiction Advisory Council. Credit: XPRIZE

The world of 20 years ago would probably seem unrecognizable to many who have grown with Internet and mobile services enabling an always-connected, everything-on-demand lifestyle. Now imagine hitting fast forward and teleporting 20 years into the future to consider how science and technology may have shaped society in the world of 2037. That’s the premise for an XPRIZE competition backed by some of the finest storytellers turned science fiction advisors.

The XPRIZE Foundation is more known for sponsoring competitions aimed at spurring companies to reach scientific and technological milestones, such as sending robotic rovers to the moon or creating a medical “Tricorder” in the style of “Star Trek.” But this summer, the X-Prize Foundation unveiled a new Science Fiction Advisory Council consisting of book, film and TV storytellers such as Margaret Atwood (“The Handmaid’s Tale”), Neil Gaiman (“American Gods”), Andy Weir (“The Martian”) and Veronica Roth (The Divergent series), among others. Some of these science fiction advisors have already written short stories that envision passengers aboard ANA Flight 008 from Tokyo to San Francisco being flung 20 years into the future.

XPRIZE’s Seat 14C campaign also invites members of the public over the age of 18 to submit their optimistic vision of the future as a short story between 2,000 and 4,000 words. That contest for runs until August 25, 2017, which is when XPRIZE will narrow down the finalists to three stories. Members of the Science Fiction Advisory Council will vote on the winning story and writer, who will in turn receive  a Tokyo travel package worth $10,000, including round trip economy airfare to Tokyo for two, four nights in a 4-star hotel, $1,500 in spending money, a GoPro HERO5 Ultra HD Camera and an ili Handheld Universal Translator.

“The stories will be judged based on unique vision of the future, adherence to story prompt, and alignment with a techno-optimistic view of the future,” according to an XPRIZE press release.

Anyone needing inspiration for envisioning how the world might change within 20 years might consider looking 20 years into the past for lessons. In 1997, the vast majority of Americans still used dial-up modems to access email services and websites at speeds that would seem unimaginably slow to anyone who has grown up in the age of broadband. More people still carried pagers than cellphones, and the iPhone’s debut was still 10 years away. Home entertainment systems primarily consisted of bulky cathode ray tube TVs, VCRs and maybe a Nintendo 64 or PlayStation video game console. Drivers and pedestrians relied upon maps and memory rather than GPS devices to navigate the world.

Many of the household names among today’s tech movers and shakers had yet to make their mark back in 1997. The tech giant Google would not be officially founded until a year later in 1998. Amazon was not even a five-year-old company selling books online in competition with formerly dominant brick-and-mortar booksellers such as Barnes & Noble and Borders. Netflix had just officially formed in 1997 and would not launch its online service focused on mailing out DVDs to customers until the following. Last but not least, Steve Jobs had just returned to the helm of Apple after the company’s share of the personal computer market had fallen to barely 4 percent while hemorrhaging more than $1 billion each year.

That was 20 years ago in the past. Whoever creates wins the XPRIZE 14C competition by creating a compelling vision of the world in 2037 will also become an honorary member of the XPRIZE Science Fiction Advisory Council. The council of science fiction advisors is charged with the following:

The advisors will assist XPRIZE in the creation of digital “futures” roadmaps across a variety of domains: Planet & Environment; Energy & Resources; Shelter & Infrastructure; Health & Wellbeing; Civil Society; Learning & Human Potential; and Space & New Frontiers. These roadmaps will be dynamic, interactive narratives that describe a vision for the future in each of these domains and identify the ideal catalysts, drivers and mechanisms—including potential XPRIZE competitions—to overcome grand challenges and achieve a preferred future state.

In other words, the XPRIZE Foundation is hoping that its science fiction advisors can help the nonprofit organization envision realistic paths for creating a “preferred future state.” The main fly in the ointment may be the fact that people often have very different ideas about what makes for a better future. But it’s worth a shot to look beyond the usual types of expertise in gathering more far-out ideas from many of the better storytellers of our age. After all, science fiction has already played a role in shaping the future by inspiring scientists and engineers for decades.